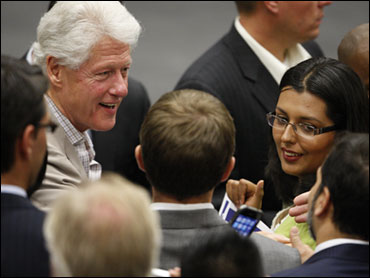 Bill Clinton says Democratic incumbents can't run away from their records, so they might as well embrace them. "Tell your story," the former president advised Senate Majority Leader Harry Reid and other embattled Democrats.

Clinton, considered one of the sharpest political minds of his generation, also urged Reid to avoid getting "ground down" by all the talk of this being an anti-incumbent, anti-Washington, anti-Democratic election year.

Clinton offered that advice and more in a brief interview with The Associated Press following a Thursday night rally on behalf of Reid. The two-term Democratic president has emerged from a political wilderness of sorts to become a popular campaign surrogate, long forgiven for 2008 outbursts that hurt the campaign of his wife, Hillary, and angered candidate Barack Obama.

Clinton is still basking in the glow of Sen. Blanche Lincoln's victory Tuesday night in their home state of Arkansas, where he helped turn the Democratic runoff in her favor.

What lessons could Reid learn from Lincoln's victory?

Second, he said, don't listen to political consultants who steer incumbents away from talking about their records. Jon Corzine followed that bad advice, Clinton said, and got bounced from the New Jersey governor's office last year.

At the rally, Clinton told voters to channel that anger against Reid's opponent, tea party favorite Sharron Angle, whom he accused of hiding from the spotlight because her positions are so extreme.

The former state legislator wants to phase out Social Security and backs the processing of nuclear waste at Yucca Mountain, a wildly unpopular notion in Nevada.

He also questioned why Nevada voters would consider tossing out their senior senator.

The answer is that voters are angry at Washington, understandably so, Clinton said, but that doesn't mean Reid and other vulnerable incumbents are doomed.

In the interview, the former Arkansas governor who dubbed himself "The Comeback Kid" during his 1992 presidential run said Reid and other incumbents can't get down on themselves.

"He needs not to be ground down by this," Clinton said. "A lot of politicians are taking this personally. You have to take it seriously, but not personally."

Unfortunately, Reid was not on hand to hear the advice or attend his own rally. He was in the last place most incumbents want to be seen these days, Washington.