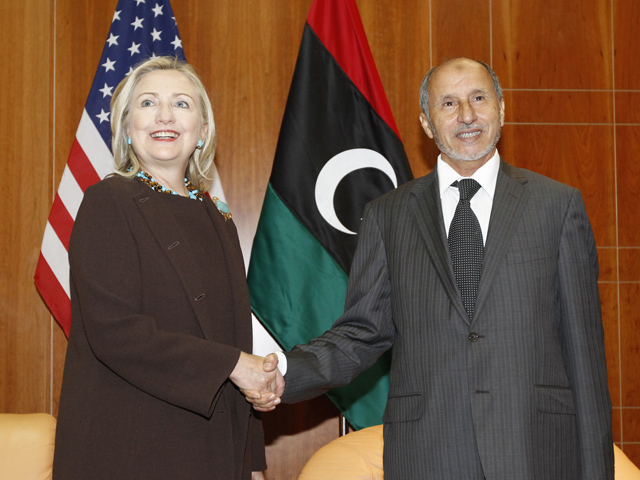 TRIPOLI, Libya - The Obama administration offered millions of dollars in new aid to Libya as Secretary of State Hillary Rodham Clinton encouraged the country's unsteady new leadership to commit to a democratic future free of retribution, and acknowledged in unusually blunt terms that the United States would like to see former dictator Muammar Qaddafi dead.

"We hope he can be captured or killed soon so that you don't have to fear him any longer," Clinton told students and others at a town hall-style gathering in the capital city.

Until now, the U.S. has generally avoided saying that Qaddafi should be killed.

U.S. officials usually say they want to see him brought to justice, something Clinton also said during her daylong visit.

"I am proud to stand here on the soil of a free Libya," Clinton said. "The United States was proud to stand for you in your fight for freedom and we will continue to stand with you as you continue this journey."

She met with the leader of Libya's Transitional National Council, Mahmoud Jibril, and offered about $11 million in additional aid. The fresh aid boosts Washington's contribution since the uprising against Gadhafi began in February to roughly $135 million.

The new aid package includes medical aid for wounded fighters and additional assistance to secure weaponry that many fear could fall into the hands of terrorists. Aides said the money is meant partly as a pledge to ongoing U.S. support during what will be a difficult passage to free elections and a new government after four decades of dictatorship.

"Now the hard part begins," Clinton said, heading into a meeting with the transitional leaders.

Clinton referred several times to the importance of including all factions in a future democratic government, a reference to fears among Libyans that those with ties to the Gadhafi regime will be punished.

"The most important thing now is to make sure that Gadhafi and his regime are finally prevented from disrupting the new Libya," Clinton said. "We want to do everything we can to prevent him from causing trouble."

Addressing leaders of the interim body, Clinton noted that the fighting isn't over yet but said NATO would continue to protect civilians as long as the threat continues.

"We are encouraged by the commitment of the Transitional National Council of taking the steps necessary to bring the country together," she said. But the secretary also said that "all members of all militias must see the benefit of joining the new government."

She visited Tripoli Medical Center, where she visited the bedsides of four wounded former rebels. One soldier was wounded Saturday during the battle for Bani Walid, one of two towns thought to be the most likely hiding places for Gadhafi, who has been on the run for weeks.

Some of the new medical assistance announced Tuesday would go to help evacuate seriously wounded fighters who need medical care aboard. Clinton saw dozens of such fighters as she entered the hospital.

U.S. officials said there have been about 15,000 wounded during the conflict so far, about 1,500 of whom are now amputees and require specialized care that is not available in Libya.

The medical portion will include spare medical parts to fix equipment for trauma care, and chemicals needed to run and drive equipment, the officials said. It also will go to establish a patient tracking program.

Gunfire could be heard in the distance at least twice during Clinton's visit, but it was not clear whether the shots were part of any ongoing fighting.

Reporting from Tripoli, CBS News correspondent Allen Pizzey said Secretary Clinton arrived in Tripoli amid heavy security, and security is one of the focuses of her trip here - specifically about 10,000 shoulder-fired surface-to-air missiles that are missing from Muammar Qaddafi's arsenal. Part of the $135 million in aid that the U.S. has pledged to Libya's new leadership will go to search for and dismantle those weapons.

The State Department already has sent 14 weapons experts to Libya and is looking for other countries to contribute to the effort. The new U.S. contribution of some $10 million means Washington will have spent $40 million on the effort alone since the former rebels began making major military progress, according to the officials.

U.S. officials told reporters traveling with Clinton that the increased aid is evidence of the administration's commitment to working with the National Transitional Council as it consolidates control over the entire country and moves to hold free and fair elections.

As part of the new aid package, the U.S. will re-launch several educational programs, including Fulbright scholarships and English language training, and help fund an archeological project that will survey eastern Libya, the officials said. In addition, they said Clinton will be stressing the importance of good governance, inclusion, democratization and diversifying Libya's economy, so it no longer is almost entirely dependent on oil revenue.

Officials said Clinton would also raise the case of the Lockerbie bombing with Libyan officials. Last month, Scotland asked Libya's new authorities to help track down those responsible for the 1988 bombing of Pan Am Flight 103 over the Scottish town. It killed 270 people, most of them American.

The only person charged with the bombing - former Libyan intelligence officer Abdel Baset al-Megrahi - was freed on compassionate grounds in 2009 because of illness. His release infuriated the families of many Lockerbie victims.

Clinton is the latest in a string of senior Western dignitaries to visit Libya in recent weeks — British Foreign Secretary William Hague was there Monday — and her arrival came as Libyan officials said they had captured almost all of Bani Walid, one of Qaddafi's last remaining strongholds, but still face pockets of resistance as they try to end a weekslong standoff.

About 1,000 Libyan revolutionary troops launched a major assault on Qaddafi's hometown of Sirte on Tuesday, surging from the east to try to capture the last area under loyalist control.

Fierce resistance in Bani Walid and Sirte has prevented Libya's new leaders from declaring full victory and setting a timeline for elections. It has been more than two months since the former rebels gained control of Tripoli and the rest of the oil-rich North African nation.

But the city of Sirte, Qaddafi's hometown, is still under siege by the rebel troops and there's no end in sight for that.

Pizzey reports that the National Transitional Council says when Sirte falls, they will declare the whole country free and move on with the business of forming a proper government, having elections and so on. They're full of good intentions, Pizzey said, but they obviously have a long, long way to go, and they're going to need all the friends and help they can get.