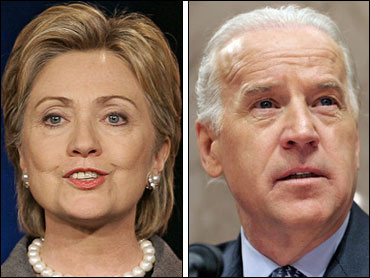 By The Politico's Kenneth P. Vogel

Joe Biden is donating to charity a contribution from a Houston oilman on trial for charges related to paying kickbacks to Saddam Hussein, and John McCain says he'll follow if Oscar Wyatt is convicted. But Hillary Rodham Clinton would make no such pledge.

Sens. Biden (D-Del.), McCain (R-Ariz.) and Clinton (D-N.Y.) years ago accepted thousands of dollars for previous campaigns from Wyatt, an opinionated self-made billionaire, and his wife, Lynn, as did dozens of others.

Wyatt, an 83-year-old World War II vet, was indicted in 2005 on fraud and conspiracy charges related to illegal payments for oil contracts from the Saddam-led Iraqi government under the United Nations' oil-for-food program.

In an unusual move, a Wyatt spokesman, responding to a Politico story, e-mailed reporters urging "any politicians who want to return those funds received from [Wyatt]" to instead donate them to DeBakey Medical Foundation in Houston.

Mark Paustenbach, a spokesman for Biden's presidential campaign, did not know to which charity his boss' Senate campaign committee would donate the $1,000 it accepted from Wyatt in 1995.

"It was an isolated contribution," he said. "We have no idea why it was made, but we're giving it away."

McCain spokeswoman Jill Hazelbaker said it is important to note the $6,000 McCain accepted from the Wyatts was not to his current presidential campaign. It was during his 2000 presidential run and his 1998 Senate reelection campaign.

Still, she said, "Should Mr. Wyatt be found guilty of a crime in the oil-for-food case, we will of course give the money to charity."

The nearly $5,000 Clinton accepted from the Wyatts dates from her 2000 and 2006 Senate campaigns. But her spokesman did not respond to questions about whether her Senate campaign would return the contributions.

Clinton last month donated $23,000 to charity - including contributions to her Senate campaign and political action committee - from Norman Hsu, a one-time fugitive convicted on grand theft charges years ago. Additionally, Clinton returned to donors about $850,000 in contributions Hsu raised from others for her current and past campaigns through a process known as bundling.

That extraordinary step highlighted - and escalated - the sensitivity of politicians to questions about the sources of their campaign cash.

In a 2008 presidential race that has seen unprecedented early fundraising and spending, big donors and bundlers have found themselves in the spotlight.

On the one hand, campaigns point to their rosters of rainmakers as evidence of their money-raising ability and also as ambassadors of sorts. But on the other, operatives live in fear that the media, or an opposing campaign, will turn up something embarrassing on a donor who could become a campaign issue, like Hsu did.

New Mexico Gov. Bill Richardson, a Democrat and the only presidential candidate to take the Wyatts' cash for his 2008 campaign, quickly said he'd give to charity the $2,300 he got from Oscar Wyatt after Politico alerted him of the contribution and of Wyatt's indictment.

Sen. Sam Brownback (R-Kan.), who is seeking the GOP presidential nomination, accepted $1,000 in 1996 from Lynn Wyatt. His campaign did not respond to questions about whether he'd return the money if Oscar Wyatt is convicted.

Wyatt, whose trial started this month in New York, has pleaded not guilty to all charges, which carry a maximum of more than 60 years in prison.

He built an empire buying oil from some of the more treacherous parts of the world. In the process, he threw his weight and his wealth around, with mixed results.

In 1980, he pleaded guilty to misdemeanor charges of violating federal oil price regulations, according to a 2005 story in USA Today. In 1990, though, he was credited with helping free 21 American hostages held by Saddam.

In 1997, frustraed by the British government's lack of action in opening a slot at a London airport for an airline he invested in, Wyatt asked for help from McCain, according to a 2000 story in the Houston Chronicle. It reported that McCain wrote the head of the U.S. Department of Transportation requesting help for Wyatt and his partner. That same month, Wyatt and his wife sent McCain $4,000 in campaign contributions.

Overall, the Wyatts, fixtures of Houston's high-society scene, cut checks totaling more than $670,000 to national committees and candidates for federal offices since the mid-1990s, according to the earliest Federal Election Commission records that are easily searchable.

A Politico analysis of FEC records found more than 70 percent of their contributions have gone to Democrats.

Since Oscar Wyatt's 2005 arrest in the alleged oil-for-food scam, the couple's giving has tailed off somewhat. Still, they found politicians willing to accept nearly $22,000 in donations. Of those, Richardson, Sen. Frank R. Lautenberg (D-N.J.) and Rep. Nick Lampson (D-Texas) said they are donating or returning the Wyatts' contributions, while other recipients are awaiting the outcome of Wyatt's trial.

Neither Wyatt's lawyer nor his spokesman responded to questions about why Wyatt contributed to politicians. A 2005 USA Today story quotes him as saying he supports Democrats because "when Democrats are in power, there's usually chaos. And in chaos, there's opportunity."

It's unclear if the contributions will become an issue in the trial, but the case is already rife with fascinating political subplots.

Wyatt had been an outspoken critic of both President Bush and his father, the 41st president, and their invasions of Iraq. And Wyatt's lawyers allege his prosecution is politically motivated, asserting he was actually involved in peace talks with Saddam before the first war.

But the federal government is arguing Wyatt's kickbacks accorded him a privileged status in Iraq. They played an audiotape of a 1990 meeting in which Saddam called Wyatt and the late Texas Gov. John Connally, who also was involved in the hostage talks, "friends."

Prosecutors also say they have a former Iraqi oil official's diary entries, one of which suggests Wyatt tipped off Saddam to the impending 2003 invasion. Another suggests Wyatt convinced Sen. Edward M. Kennedy (D-Mass.) to deliver a speech against the war in Iraq, though that seems like a stretch, considering Kennedy was on record early opposing the war.

Kennedy's office did not respond to inquiries about whether he'd return $3,000 the Wyatts gave him in 1993.

The government is also seeking to introduce copies of entries from Wyatt's own address book, including one for commodities trader Marc Rich, who fled the country after being charged with evading more than $48 million in income taxes and violating sanctions by buying oil from Iran.

When President Clinton, just before leaving office, pardoned Rich, it prompted allegations of a quid pro quo, since Rich's ex-wife was a major contributor to the Democratic Party and Clinton's presidential library.