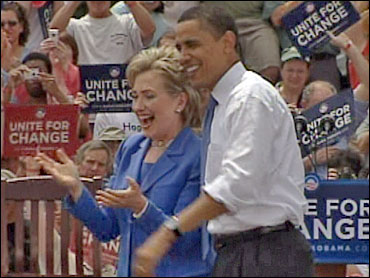 Senator Hillary Clinton is by far the favorite choice for the number two spot on the Democratic ticket, according to a CBS News/New York Times poll of delegates to the Democratic convention. When asked who they would like Barack Obama to select, 28 percent volunteer her as their top choice for Vice Presidential nominee.

Support for Clinton as the first choice for the vice-presidential nomination is not universal. It is mostly found among delegates who were pledged to her when selected. Sixty-one percent of delegates pledged to Clinton name her as their choice for vice presidential candidate.

Obama's pledged delegates are less enthusiastic about the choice of Clinton as the vice presidential nominee. Eight percent of them choose Richardson, seven percent choose Biden, and another six percent choose John Edwards. Just percent name Clinton, and as just as many suggested Sebelius, Webb or Clark.

CBS News and The New York Times interviewed a random sample of 972 delegates to the convention, including both pledged delegates (who were committed to support a candidate when they were selected to attend the convention), and superdelegates, the party leaders and elected officials who can support any candidate they choose at any time.

Most delegates (61 percent) think Clinton's selection would help Obama's chances of winning the general election in November. Nearly all of those originally pledged to Clinton say this. Far fewer of Obama's pledged delegates see the benefit from naming her. Thirty-five percent of Obama's pledged delegates think having Clinton's name on the ticket would help Obama win in November, 23 percent of them say choosing her would hurt.

Nearly half the superdelegates interviewed did not offer a VP pick. Clinton led among those who did - 20 percent named her. But 10 percent selected Biden, four percent named Edwards, five percent chose Bayh and three percent volunteered Richardson.

In addition, about six in 10 women and a similar percentage of men say that Clinton's name on the ticket would help Obama in the fall.

The CBS News/New York Times Delegate Poll was conducted July 16-August 17, 2008 with a random sample of 972 Democratic delegates. The error due to sampling could be plus or minus three percentage points for results based on the entire sample. Interviews were conducted via phone; if a delegate preferred, he or she could complete the survey online. Online interviewing was conducted by CfMC, a San Francisco-based research software company.