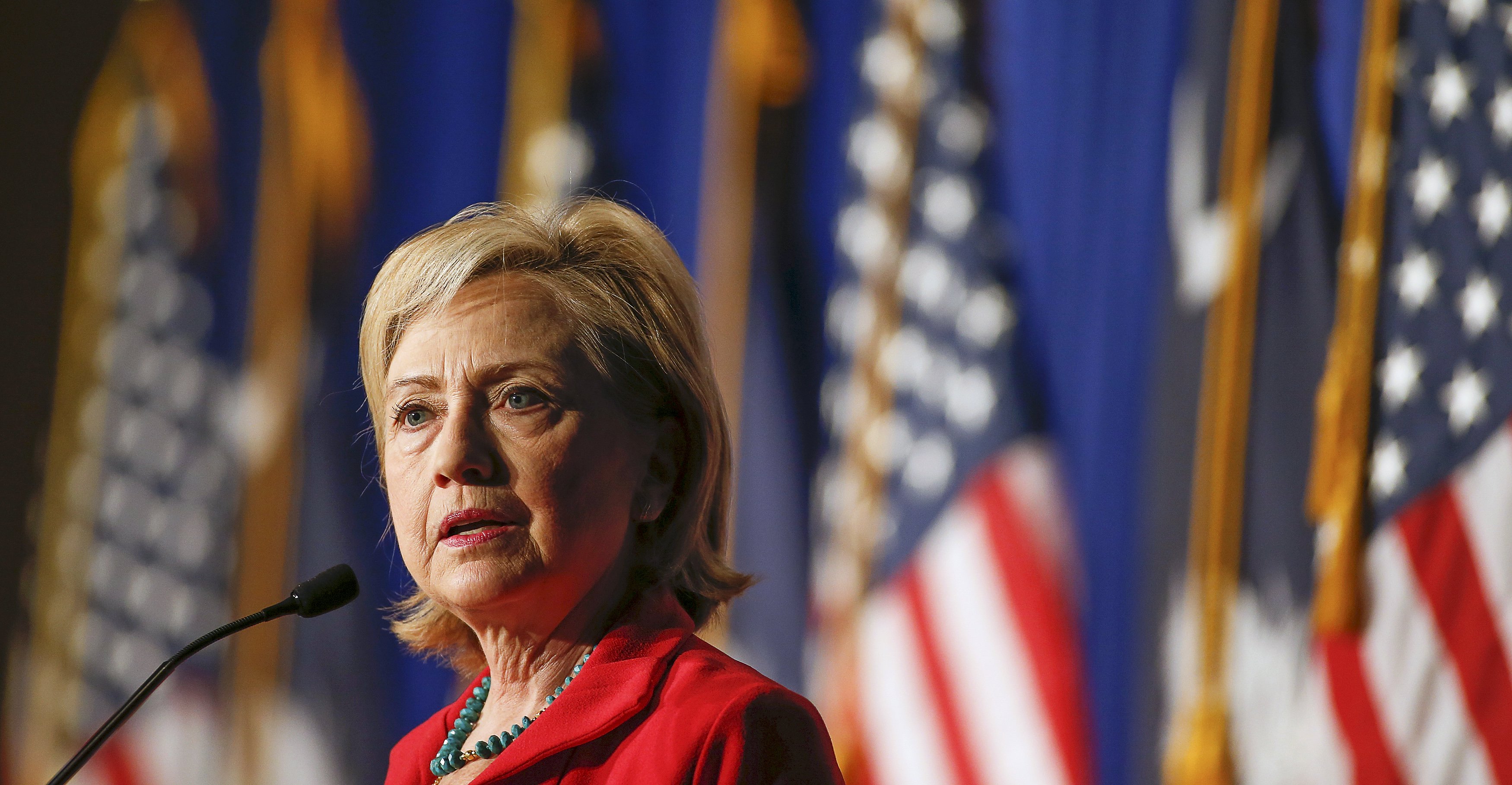 Hillary Clinton said Thursday that the first step in addressing police violence against minorities is to "acknowledge and believe that black lives matter."

"This is not just a slogan," she said at a forum with local mayors and elected officials in West Columbia, S.C. "This should be a guiding principle."

Although her trip to South Carolina -- her third since announcing her run for the Democratic nomination for president -- was billed by her campaign as an opportunity to talk more about her economic vision, her first appearance there was bookended by a discussion of race. Clinton, along with her rivals for the nomination Sen. Bernie Sanders and Martin O'Malley, have rushed in the past week to lead the way in their support of the "black lives matter" movement since a group of protestors disrupted a presidential town hall at Netroots Nation, a progressive gathering in Phoenix, Arizona, on Saturday.

Sanders and O'Malley were criticized for responses viewed as inadequate and that misunderstood the movement's purpose. Clinton did not attend, but she's been previously criticized for using the phrase "all lives matter" at a community gathering at a church in Florissant, Missouri, which was similar to Thursday's event in West Columbia.

In her remarks on Thursday, however, Clinton did not wait to address the recent church shooting in Charleston and the death of Walter Scott, a black man who was shot and killed in North Charleston by a police officer after fleeing a traffic stop.

"It's been a remarkable time for South Carolina," she said at the top of her speech to a crowd of 400 gathered at Brookland Baptist Church. "As President Obama recently said, an example of true grace. That did not come from above. That came from people in communities rising up, speaking out, acting together."

She went on to praise state leaders for doing "the right thing" by voting to remove the Confederate flag from statehouse grounds, but also to say that there is still work to do across the country to create more opportunities for young people of color and to rebalance the criminal justice system.

"It's also important to recognize that we have to tackle these problems together," she said. "You have to rebuild bonds trust and respect between elected officials and those who they serve, between our law enforcement and the communities they serve."

Clinton added that it was "heartbreaking" to learn about the death of Sandra Bland, a Texas woman whose death while she was in police custody is under investigation.

The question specifically about police violence came closer to the end of the event, when the forum was opened to questions from the audience. Clinton proposed better training programs for police forces, recalibrated to emphasize how underlying feelings and "assumptions that we make about each other" influence decision making.

"All of us want a safe community," she said, "so we should be smart enough to figure out how we can provide that safety without intentionally or unintentionally targeting a particular group of Americans."

Her words were reminiscent of those she used in a Facebook question and answer forum on Monday, two days after Sanders and O'Malley faltered at Netroots. Clinton wrote: "Black lives matter. Everyone in this country should stand firmly behind that." Her response was and still is the most "liked" post in the thread.

That message is especially important for Clinton in South Carolina, the first state with a significant African American population to hold a primary contest and an important springboard for the national African American vote. Nearly thirty percent of the population in the state is African American and, though the primary is a long way off, Clinton's campaign is already working to get the vote out.

Clinton's state team of 8 organizers have opened 2 offices in the state and held more than 300 grassroots campaign events since Clinton announced her run in April. The campaign held its 150th phone bank last week. In a call with reporters Tuesday, Clinton's director of state campaigns Marlon Marshall said the campaign would continue to reach out and recruit volunteers in "their communities, homes, places of worship, schools, and work."

"Today's crowd was a very diverse crowd," said Steve Benjamin, the mayor of Columbia, who introduced Clinton Thursday and plans to formally endorse her.

"I believe that the commitment to ensuring that social justice and criminal justice reforms also are implemented all across this country are things that people want and need to hear," he told CBS News. "For her to be able to clearly articulate where she stands went over very well with this audience."

The policies she has presented in South Carolina, including a tax credit for businesses that hire apprentices, increased investment in infrastructure in rural areas, and changing sentencing guidelines, are direct appeals to African American Democratic voters and clear signs that Clinton is trying to avoid the mistakes of her last run.

"In many respects, at first, it was presumed that she had it locked up" in South Carolina in 2008, said Dr. Todd Shaw, an associate professor of political science and African American studies at the University of South Carolina. "But a couple of things happened."

Clinton -- well known and well liked among African American Democrats in South Carolina at that time -- lost the state's primary to Barack Obama by almost 30 points. Obama, who at one time had those voters wondering if he was "black enough," had won the Iowa caucus a few weeks earlier. In fact, what that signaled was arguably more important to them - it showed that his appeal was broad enough to win in a state with a very small black population.

"If he can win Iowa," Shaw said, recalling the sentiment among black voters at the time, "this guy has something behind him."

And Obama campaign's effort on the ground in South Carolina was unmatched.

"I reject the idea that Hillary 'lost' black voters," said Cornell Belcher, the president of Brilliant Corners Research and Strategies and a part of Obama's polling team in 2008 and 2012. "Hillary [was] a strong candidate, the Clintons had a strong brand. But Barack Obama flat out went out there and won them."

Obama went on to win the Democratic primaries in many other southern states and the nomination.

"I frankly think, more so than Iowa, I think the nomination belongs to South Carolina," Belcher said.

Belcher said Clinton's choice to speak specifically to African American audiences is smart, and stands out in the Democratic field. Neither Sanders nor O'Malley has the southern ties that Clinton does, having lived and worked in Arkansas, while her husband was governor. None of the other Democrats have traveled to the state since making their respective announcements. Belcher predicts that without their competition, and without an Obama-like figure in the race, Clinton is in position to win South Carolina.

One challenge for Clinton this primary cycle - if not competition - could be figuring out how to lead the country beyond the mere words "black lives matter."

"It's kind of remarkable that activists are saying that agreeing that black lives matter is not going to do it," Shaw said. "You're going to have to really prove to us that you understand African American policy concerns and needs."