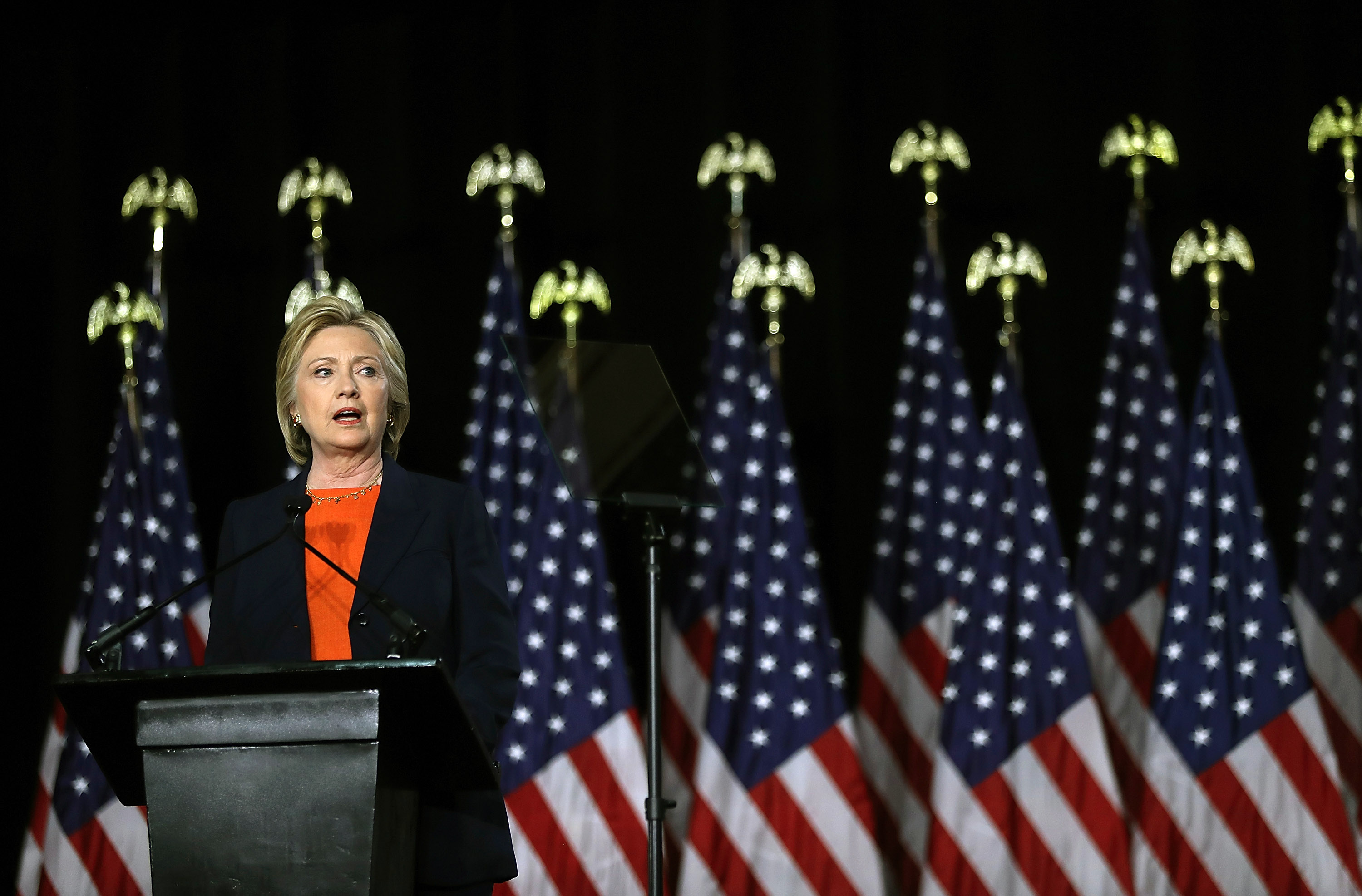 SAN DIEGO -- Hillary Clinton ripped apart Donald Trump's vision of America's foreign policy on Thursday, in a speech that questioned, chastised and, at times, mocked his positions and his ability to be the next president.

"Donald Trump's ideas aren't just different; they are dangerously incoherent," Clinton said, speaking to a crowd of 200 people gathered at the Prado in Balboa Park in San Diego. "They're not even really ideas, just a series of bizarre rants, personal feuds, and outright lies. He is not just unprepared. He is temperamentally unfit to hold an office that requires knowledge, stability and immense responsibility."

Clinton's campaign billed the speech Thursday as a "major" policy address and the first centered on national security and foreign policy since Trump became the presumptive Republican nominee.

In recent weeks, Clinton's critique of Trump's comments about banning Muslims from entering the United States, on nuclear proliferation and America's involvement in NATO have become a routine part of her stump speech. But Clinton's delivery of those familiar points here was pointed, and delivered in almost roast-like fashion, with Clinton pausing to allow people in the audience to laugh and applaud.

"He says he has foreign policy experience because he ran the Miss Universe pageant in Russia," she said.

But Clinton's larger message, which her campaign hopes will reach voters in both parties, was that she believes that Trump lacks the personal qualities required to sit in the Oval Office.

"Making the right call takes a cool head and respect for the facts," she said. "It takes a willingness to listen to other people's points of view with a truly open mind. It also takes humility, knowing you don't know everything, because if you're convinced you're always right, you'll never ask yourself the hard questions."

Clinton used her own experience as Secretary of State to contrast with Trump, and offered the audience a description of what went on in the Situation Room before the raid that killed Osama Bin Laden.

"The lives of those brave SEALs and helicopter pilots hung in the balance," she said. "It was a decision only the President could make. And when he did, it was as crisp and courageous a display of leadership as I've ever seen."

She added: "Now, imagine Donald Trump sitting in the Situation Room, making life-or-death decisions on behalf of the United States."

Trump has also cast Clinton, who is now on the verge of clinching the Democratic nomination, as unqualified to do the job. At a campaign rally in Sacramento on Wednesday, after news outlets reported that Clinton would focus on Trump in her speech, Trump said Clinton "has no natural talent to be president."

"A lot of people think I look extremely presidential," he said, reading a statement he prepared aboard his plane. "But, do you really believe that Hillary is presidential? This is not presidential material."

Trump appeared to be watching Clinton's speech as it happened -- "Bad performance," he wrote on Twitter -- and Clinton seemed to expect as much.

Clinton framed voters' choice in this election as a choice between "two very different visions of America," with Trump's vision as "angry, afraid, and based on the idea that America is fundamentally weak and in decline." The other choice, she said, was a vision that is "hopeful, generous, and confident in the knowledge that America is great."

Clinton said she had "faith" that Americans would "make the right decision."

"Because making Donald Trump our commander-in-chief would be a historic mistake," she said.