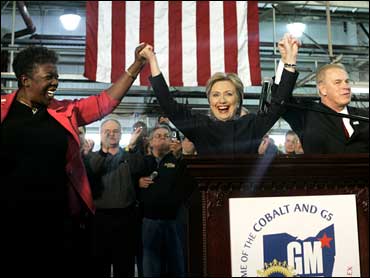 Political Players is a weekly conversation with the leaders, consultants, and activists who shape American politics. This week, as Sen. Hillary Clinton prepares to close down her campaign, CBS News' Brian Goldsmith talked with Ohio Congresswoman-and staunch Clinton supporter-Stephanie Tubbs Jones about how Democrats can come together, whether sexism is more powerful than racism, and why her fellow African-Americans should move past Jones' initial opposition to Obama's candidacy.

CBSNews.com: There's been a lot of criticism of that speech Senator Clinton gave on Tuesday night. Many Democrats said that she wasn't gracious enough in acknowledging Senator Obama's victory. How do you respond to that?

Rep. Stephanie Tubbs Jones: You know what, I thought her speech was a great speech. And I thought she did, in fact, acknowledge Senator Obama reaching a milestone of delegates. You have to keep in mind that Senator Hillary Clinton has been running for president, like Barack Obama, for 15 months. And the expectation that she's going to turn off and turn in on a moment's notice is unrealistic.

Just like Obama's supporters wouldn't necessarily jump and support Hillary Clinton if she had won, Hillary Clinton supporters are not going to just jump to support Barack Obama solely because she said, "congratulations," and acknowledges the victory. It's a process. And there's no hurry. And I think the dilemma that both Senator Clinton and Senator Obama face is everybody's rushing to have something happen. There's no rush.

CBSNews.com: A number of Democrats--and not just Obama supporters--have asked, why does she want to wait until Saturday to give her speech? Why not embrace him sooner this week?

Rep. Stephanie Tubbs Jones: Again, think of how 18 million people voted. And there are significant numbers of people in her campaign who she would want to talk to personally before she made a decision. The fact that colleagues were on the phone with her, and then went to the media expressing what she had planned, gave her absolutely no time.

CBSNews.com: Do you think the last couple of days have made it more likely that she would be asked to serve as the vice presidential candidate, or less likely? And do you think that that job is even something that she's interested in?

Rep. Stephanie Tubbs Jones: Senator Clinton has said from the beginning that she is willing to do whatever it is that would allow the Democratic Party to be successful in November. And within that statement, I suppose she's open to the possibility that she could be the vice president.

Other people like to be kingmakers. She's not advocating that she be the vice president. And I don't know whether it helps or hurts. It depends on who you're talking to. I think Senator Obama should give some consideration to a woman who got 18 million votes. But whether he does or not, it's a personal decision. And he has said that she would be on anybody's short list for vice president, which is true.

If people were being reasonable, it would make sense to give Hillary Clinton and Barack Obama time to sit down and contemplate what they could do collectively for the party. They've not had that opportunity, but now they do.

CBSNews.com: Your home state is really ground zero for where the general election may be won or lost. You said repeatedly, during the campaign, that Senator Clinton was the stronger candidate to carry Ohio. What do you think Senator Obama has to do now to bring along a lot of the blue collar whites, the Catholics, the women, the Hispanics who supported Senator Clinton?

Rep. Stephanie Tubbs Jones: I think that he has to visit Ohio and visit places outside of the traditional urban areas, to give people an opportunity to meet and greet him. I think he has to talk about policies that are important to them. I think he has to reach out to the people of Ohio who did not support him, and seek their support, and ask for their prayers and their encouragement.

CBSNews.com: Has he reached out to you?

Rep. Stephanie Tubbs Jones: He has not.

CBSNews.com: And what would you ask him specifically, if he called you?

CBSNews.com: Let me ask you about African-Americans in this campaign. As you know, for the first year of this campaign, Senator Clinton was leading comfortably among African-Americans. And a lot of people point to South Carolina as a turning point, and what Bill Clinton said there. Do you think that got blown up out of context?

Rep. Stephanie Tubbs Jones: Well, first of all, I think that the accusations against President Clinton and Senator Clinton in South Carolina were unwarranted and outside the body of their work. If you look at the body of work of Senator Clinton and President Clinton, I mean, he appointed more African-American federal judges than all the presidents lined up before him.

And I think those were unfair accusations. I think in many instances, some of it gave people an opportunity to say, "Oh, yes. He's not going to do anything," or, "He's a racist. So, therefore you ought to vote for Barack Obama." But I also have to say that Senator Obama ran a great campaign. And his successes in states before South Carolina gave African-American voters the belief that he could be president.

CBSNews.com: What do you think Senator Clinton, if anything, should have done differently?

CBSNews.com: CBS did a poll this week in which we asked registered voters, "Do you think it's harder for an African-American or for a woman to be elected president?" And by a double-digit margin, people thought that it was harder for a woman. Do you agree with that?

Rep. Stephanie Tubbs Jones: Absolutely. Absolutely. I mean, Hillary and I laugh about this all the time. We say, hey, when we get up in the morning as a candidate, not only do we have to put our legs in each pants legs-- and she wears pants, and I wear pants most of the time as well--but we also have to see if our hair color is appropriate, if our make-up is right. Do we have the right lipstick on? Is the pantsuit we have on the right color? Or how are people going to perceive this?

And in addition, it's a greater leap for people to be accepting of a woman candidate. Either they accuse us of being too emotional, or if you're strong, then you accuse you of being too assertive. And the list goes on.

But I will say after this election, Hillary Clinton has set the standard for what kind of woman can run for President of the United States, and the stamina, and the strength, and the tenacity and intelligence that it takes to be a successful woman candidate. Because she got as many votes as Barack Obama. I am blessed. I thank God for the opportunity that I had to be a part of her campaign.

Rep. Stephanie Tubbs Jones: I use this term all the time, but look at my body of work. This is my 26th year in public office. I've been the congressperson for ten. I was the district attorney for eight. I was a judge for ten.

But you know me. You know my leadership on the issues that are important to the community. You know what I've done to bring bacon back to the community. And you know that over time, I have recommended to you candidates for public office. On this one you disagree with me. And you're entitled to disagree.

But I have earned the right to my opinion. Martin Luther King fought for me to have the right, not only to vote, to run for office, but to choose who I believe is the best candidate. And I chose Hillary Clinton. And I stand by that decision. I make no apologies for it.

I was in this race before Barack entered the race, before Barack even declared. But I will say to you that I'm more than my support for Hillary Clinton. And I hope that you can see it.
By Brian Goldsmith