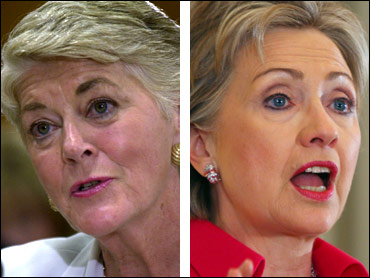 Sen. Hillary Rodham Clinton did something Wednesday night that she almost never does.

And once she started, she didn't seem able to stop.

The New York senator, who is tight race with Illinois Sen. Barack Obama for the Democratic presidential nomination, struck several sorry notes at an evening forum sponsored by the National Newspaper Publishers Association, a group of more than 200 black community newspapers across the country.

Her biggest apology came in response to a question about comments by her husband, Bill Clinton, after the South Carolina primary, which Obama won handily. Bill Clinton said Jesse Jackson also won South Carolina when he ran for president in 1984 and 1988, a comment many viewed as belittling Obama's success.

"I want to put that in context. You know I am sorry if anyone was offended. It was certainly not meant in any way to be offensive," Hillary Clinton said. "We can be proud of both Jesse Jackson and Senator Obama."

"Anyone who has followed my husband's public life or my public life know very well where we have stood and what we have stood for and who we have stood with," she said, acknowledging that whoever wins the nomination will have to heal the wounds of a bruising, historic contest.

"Once one of us has the nomination there will be a great effort to unify the Democratic party and we will do so, because, remember I have a lot of supporters who have voted for me in very large numbers and I would expect them to support Senator Obama if he were the nominee," she said.

The Clintons long have enjoyed overwhelming support from black voters, but that has been eclipsed during the primaries and caucuses by enthusiasm and support for Obama, who has pulled huge margins among black voters. Arguments over the role of race and gender have flared up repeatedly throughout the contest between Obama, who would be the nation's first black president, and Clinton, who would be its first female one.

Earlier in the day, Hillary Clinton supporter and fundraiser Geraldine Ferraro gave up her honorary position with Clinton's campaign after she said in an interview last week that Obama would not have made it this far if he were white. Obama said Ferraro's remarks were "ridiculous" and "wrong-headed."

Of Ferraro's comment, Hillary Clinton told her audience: "I certainly do repudiate it and I regret deeply that it was said. Obviously she doesn't speak for the campaign, she doesn't speak for any of my positions, and she has resigned from being a member of my very large finance committee."

Earlier Wednesday, Ferraro defended her comments on CBS News' The Early Show and said they were taken out of context. (

As first lady and senator, Clinton rarely cedes an inch to her critics. On the issue of her vote to authorize the Iraq war, for instance, she steadfastly has refused to apologize, coming close by saying she regrets it, despite calls from many anti-war voters in the party to make a more explicit mea culpa.

Her third conciliatory statement of the evening was more in keeping with that fighting stance.

Asked about the government's efforts in the Gulf States after Hurricane Katrina, Hillary Clinton turned an apology into a criticism of President Bush, who happened to be speaking at a Republican event in another room at the same hotel.

"I've said it publicly, and I say it privately: I apologize, and I am embarrassed that our government so mistreated our fellow citizens ... It was a national disgrace," Hillary Clinton said.