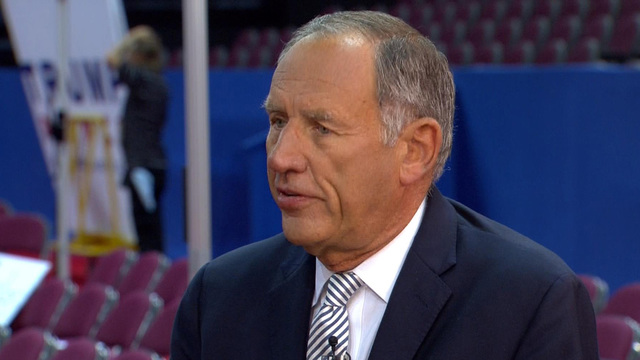 Donald Trump is certainly not the best of friends with many leaders in his party, but one thing they all agree on: their outright opposition to Obamacare.

According to Trump, the Affordable Care Act is causing "incredible financial burden" and he vows to repeal and replace it if he's elected president, while somehow still offering universal health care.

However, according to Cleveland Clinic CEO Dr. Toby Cosgrove, it's unlikely that the law, now in its sixth year, will be totally dismantled. He says Obamacare may actually be having an effect closer to Trump's goal to "take care of everybody."

"What we see is access. We got now 20 million more people covered," Cosgrove told "CBS This Morning" Wednesday.

Cosgrove said that quality care metrics have been gradually improving, but the act is still falling short of its "principal objective" -- lowering costs.

"I think the big question really... is about affordability. Have we been able to reduce the inflation of health care? Now it's come down since 2010, we've seen a continual downward trend, it reached a low last year of 2.6 percent, but it's headed up this year to about 5 percent and I think that's probably because more people are covered, more people are older and there's more things we can do for people," Cosgrove explained.

In California, the state's monthly health plan rates will jump 13 percent in 2017, more than triple the roughly 4 percent hikes in each of the last two years. According to a report released Thursday by an independent research organization called The Commonwealth Fund, premiums for employer-sponsored health insurance have risen faster than incomes in every state in the nation.

But as other hospitals are losing money and closing down, the Cleveland Clinic had its strongest financial year ever. Under Cosgrove's leadership, the clinic has reduced the cost of care by $600 million over the last three years -- even saving money by turning escalators and computers off at night and reducing the size of soap containers -- while investing more in raising employee wages and beginning new programs.

According to Cosgrove, costs can be brought down by making the health care delivery system "more efficient."

"And one of the ways we can do that is we can bring together systems instead of having essentially a cottage industry," Cosgrove explained. "We can bring it together so that it is coordinated, so not all hospitals would be all things to all people, but essentially work together as a system."

But he stressed that the most important thing was improving care delivery for patients.

"I mean one of the things, for example, is we are having what we call shared medical practices and that's when say, 12 people with diabetes all get together and they get their instructions at the same time... It's like group therapy - it helps them understand their disease better and it's very efficient for the doctor," Cosgrove said.

With the Republican National Convention being hosted in its city, the Cleveland Clinic had prepared for six months, bulking up on staff in emergency rooms and hospitals and even doing training exercises just in case of emergencies.

Cosgrove also weighed in on the fact that we have the oldest White House match-up in history - between 68-year-old Hillary Clinton and 70-year-old Donald Trump.

"Well, I think we're seeing a healthier older population across the country so I'm not surprised to see this. But I think everybody knows as you age, you have a higher incidence of disease than you do earlier and quite frankly, the presidential job - I can't imagine anything more stressful," Cosgrove said.