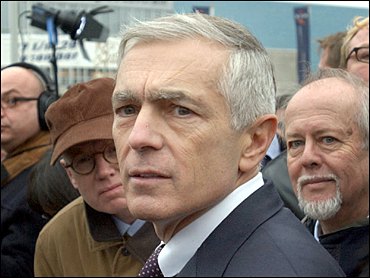 
Retired Gen. Wesley Clark certainly doesn't need to prove his breadth of foreign policy experience to voters. "I'd like to think I'd have had Osama bin Laden and Saddam Hussein by this time," Clark said at a Wednesday press conference in Concord, N.H. An ambitious statement some voters would accept simply based on Clark's background as four-star U.S. Army general and former NATO Supreme Allied Commander. But voters are a little more wary of the political novice's domestic experience.

"You're obviously an accomplished military person and I appreciate what you've done for the nation," one skeptical voter began at a "Conversation with Clark" in at a Laconia, N.H. "But what makes you think you'd be able to handle domestic issues in a similar vein that we would ask a guy like Howard Dean, a very smart guy, but not necessarily the most military-minded individual, what makes him think he could be the commander-in-chief?"

"There's a fundamental difference between domestic policy and foreign policy. It's not like two sides of the same coin," Clark responded. "Everybody who lives in America has personal, firsthand knowledge of U.S. domestic policy." Citing his own personal dealings with tax and insurance forms and real estate laws, he said, "That's the bread and butter of domestic policy, and everybody has that."

It's the foreign policy, Clark says, that sets him apart from the rest of the Democratic field, enabling him to go "toe to toe" with President Bush. "Foreign policy, if you haven't been there and done it, you don't have that experience."

The retired general makes it clear to voters he's not a politician. "If you ask me what does section 427-A mean on a law, I might not know," he admitted. On a conference call to supporters Thursday, Clark went so far as to tout his Washington inexperience. "Because I've never been in politics, there are no special interests that I owe any debts to or that are going to sway me at all. I'm going to speak up for America's national interests."

The outsider mentality is something Clark hopes voters will respond positively to. "I'm sick of Washington insiders," said April Jarvis, a New Hampshire gun factory worker and undecided voter, who came to hear Clark in Claremont Thursday night. She is also considering Dean for the same reason. "It's refreshing," added her sister Susan Hastings. "They're not a part of that good old boys clique."

While he downplays the negative perceptions that go hand in hand with politics, Clark does flaunt his practical experience, which he says comes from overseeing military bases. "It's not about politics," Clark told the Claremont voters. "It's about leadership." As a high-ranking officer, Clark managed on-base schools, maintained the roads and public utilities, and even ensured that the grocery store was fully stocked.

At the Balsam Hotel in Dixville Notch, N.H., Clark even went so far as to pull experience from the back pages of his arguably impressive resume. "I started as camp counselor at the age of 14," he said. "I want to end up as a camp counselor for America at the age of whatever I'm going to be then."

Rick Ducey, a retired state worker and devout Clark supporter, said, "It isn't trivial to care about everybody, even the people who don't have power and influence. That's great leadership." Voter Betty Mitchell agreed, saying "I think what he was trying to say was that he dealt with the minutia in addition to dealing with international policy."

Is minutia management enough experience to govern a nation? "Who knows," Mitchell pondered. "Yeah, I think so."