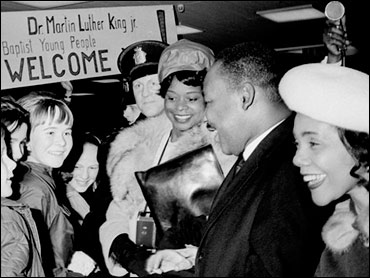 Americans reflected on Martin Luther King's legacy of racial equality and peace on a national holiday that marks what would have been the slain civil rights leader's 78th birthday. Here is a timeline of the modern civil rights movement.

May 17, 1954
School segregation is widely accepted throughout the United States until the U.S. Supreme Court makes a landmark decision in Brown v. Board of Education of Topeka, Kansas, deciding unanimously that separated educational facilities are inherently unequal and therefore unconstitutional. The ruling overthrows the 1896 Plessy v. Ferguson ruling that had set the "separate but equal" precedent

Dec. 1, 1955
Rosa Parks, a 43-year-old black seamstress, is arrested in Montgomery, Ala., for refusing to relinquish her seat to a white man and move to the "negro" section near the back of the city bus. The next day several black leaders, including Martin Luther King Jr., stage a boycott of the bus system. The protest - called the Montgomery Bus Boycott - continues for more than a year.

Dec. 21, 1956
Basing its decision on Brown v. Board of Education, the Supreme Court says the Montgomery bus segregation rule violates the constitution. The Montgomery Bus Boycott - and the bus system's segregation, end.

Sept. 23, 1957
President Dwight Eisenhower orders 1,000 U.S. Army paratroopers and 10,000 National Guardsmen to restore order to Little Rock, Ark., and escort nine black students into the previously all-white Central High School, which was to be desegregated. Weeks earlier, then Arkansas Gov. Orval Faubus called in the National Guard to surround the school and prevent the black students from entering.

February 1960
The sit-in protests - a movement mostly organized by the Student Nonviolent Coordinating Committee - begins at a Woolworth's lunch counter in Greensboro, N.C. and spreads nationwide. Joseph McNeill, a black college student, had been refused service at the lunch counter. The act sparks a growing movement of nonviolent protest and forces the desegregation at many different public facilities.

May 1961
The Congress of Racial Equality begins a two-year movement of "freedom rides" in Washington, D.C. White and black people travel by bus throughout the South to challenge segregation of interstate transportation. More than 70,000 people participate in the protest and more than 3,500 are arrested.

1962
President John Kennedy, facing constant resistance from many Southern whites on integration, orders Federal Marshals to escort James Meredith to the campus of the University of Mississippi so Meredith, who is black, can enroll. A riot breaks out before the National Guard can arrive to reinforce the marshals. Two students are killed.

April 12, 1963
Revs. Martin Luther King Jr., Fred Shuttlesworth and Ralph Abernathy lead a demonstration through the streets of Birmingham, Ala., and toward city hall to protest the city's segregation laws. Birmingham police turn fire hoses and police dogs on the crowds, and hundreds are fined and imprisoned, including King, Shuttlesworth and Abernathy.

June 12, 1963
NAACP leader Medgar Evers is murdered as he enters his home in Jackson, Miss. Byron De La Beckwith is tried twice in 1964, with both trials resulting in hung juries. Thirty years later he is convicted for murdering Evers.

Aug. 28, 1963
More than 250,000 people converge on the steps of the Lincoln Memorial during the March on Washington to hear Martin Luther King Jr. deliver his memorable "I Have a Dream" speech, which urges support for pending civil rights legislation.

Sep. 15, 1963
Four young girls attending Sunday school are killed in the bombing of the Sixteenth Street Baptist Church in Birmingham, Ala. Riots break out across the city, resulting in the deaths of two more black children.

July 2, 1964
President Lyndon B. Johnson signs the Civil Rights Act of 1964, which intends to end discrimination based on race, color, religion or national origin. It is often called the most important U.S. law on civil rights since Reconstruction, the period following the Civil War.

Feb. 21, 1965
Black nationalist leader Malcolm X is shot to death during a rally of his followers at a Harlem ballroom. The militant leader, who had left the Nation of Islam (Black Islam) to found the Organization of Afro-American Unity, had been in a bitter dispute with members of his former organization. Three Black Muslims are convicted for his murder.

Aug. 6, 1965
Congress passes, and President Lyndon Johnson signs, the Voting Rights Act of 1965, which makes it easier for southern blacks to register to vote by eliminating literacy tests as a prerequisite to vote.

Aug. 11-16, 1965
The southwestern district of Los Angeles - Watts - erupts in fire, looting and violent protests as thousands of black people take to the streets to demonstrate against long-standing social injustices. The riots leave 34 dead and more than 1,000 injured.

April 4, 1968
Martin Luther King Jr. is assassinated in Memphis, Tenn., on the balcony outside his room of the Lorraine Motel. James Earl Ray pleads guilty to the crime, but to this day questions still circulate of a conspiracy involving more people.

April 11, 1968
President Lyndon Johnson signs the Civil Rights Act of 1968, prohibiting discrimination in the sale, rental, and financing of housing.

April 20, 1971
The Supreme Court, in Swann v. Charlotte-Mecklenburg Board of Education, upholds busing as a legitimate means for achieving integration of public schools. Although largely unwelcome (and sometimes violently opposed) in local school districts, court-ordered busing continues in cities such as Charlotte, Boston, and Denver until the late 1990s.

June 23, 2003
In the most important affirmative action decision since the 1978 Bakke case, the Supreme Court (5–4) upholds the University of Michigan Law School's policy, ruling that race can be one of many factors considered by colleges when selecting their students because it furthers "a compelling interest in obtaining the educational benefits that flow from a diverse student body."

June 21, 2005
The ringleader of the Mississippi civil rights murders, Edgar Ray Killen, is convicted of manslaughter on the 41st anniversary of the crimes.

To Learn More About Civil Rights:

Click here to read more about civil rights in America.

The King Center is the official, living memorial dedicated to the advancement of the legacy of Dr. Martin Luther King, Jr.

Stanford University has a collection of primary and secondary documents pertaining to Martin Luther King, Jr.

Man shoots himself after crashing into Capitol barrier