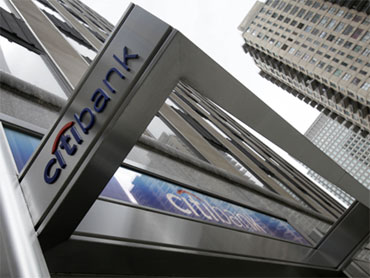 Citigroup said Friday its second-quarter net income dropped 10 percent to $2.7 billion even as its losses from failed loans fell. The drop in income reflects the bank's sale a year ago of the Smith Barney brokerage, which inflated its earnings at the time.

Citigroup Inc. joined JPMorgan Chase & Co. and Bank of America Corp. in reporting earnings that rose in the April-June period as loan losses fell. That's a positive sign for the economy, because it indicates that consumers are having an easier time paying their debts. But Citigroup, like the other banks, also had a decline in trading revenue because of the stock market's plunge this spring. All three companies surpassed analysts' earnings forecasts.

Citigroup was among the hardest hit banks by the financial crisis of 2008, and it was further hurt as many customers fell behind in loan payments during the recession. The bank's losses from failed loans fell 31 percent to $7.96 billion during the April-June period from $11.47 billion a year ago.

Like JPMorgan, Citigroup also removed some money from its reserves for future loan losses, which helps boost earnings. It's also an indication that the bank is becoming more confident that the worst of the defaults is over and that delinquency and default levels are likely to shrink in the coming quarters.

Citigroup removed $1.51 billion from its loss reserves during the quarter. A year earlier, the bank added $4 billion to those reserves.

John Gerspach, Citi's chief financial officer, said during a conference call with reporters that reserves could be released in future quarters as well if credit trends continue to improve.

Loan losses have dropped four straight quarters, and Gerspach said he was particularly encouraged by a slowdown in new delinquencies in the credit card business.

Companies Piling Up Cash But Not Adding Jobs

"It's a business I'd expect to get back on its feet through 2011," Gerspach said of Citi's big credit card lending division. He wasn't as optimistic that delinquencies from mortgages would drop as fast as those from credit cards.

The stock market's slump sent Citigroup's revenue from its securities and banking division down 11 percent from a year earlier to $6 billion. That was down 26 percent from the first quarter.

The slowdown came as more customers avoided the stock market.

"Volumes were down dramatically," Gerspach said. "There was an awful lot of people on the sidelines."

Analysts forecast the bank would earn 5 cents per share.

Total revenue fell 33 percent to $22.07 billion from $33.1 billion during the year-ago period. Citigroup's revenue fell just short of the $22.16 billion analysts had forecast.

Citigroup received $45 billion in government bailout money during the 2008 financial crisis. The company repaid $20 billion of the money late last year and the rest was converted into common stock. At the time Citi repaid the $20 billion, the government said it would sell the $25 billion in stock by the end of 2010.

Earlier this month, the government said it has now sold a total of 2.6 billion shares at a profit. It still owns 5.1 billion shares.

Shares of Citi dropped 14 cents, or 3.5 percent to $4.02 in early morning trading as the broader market fell.

During the credit crisis, Citi split its operations into two divisions as part of its plan to return to profitability.

Citi Holdings, which holds assets the company decided to sell including its worst-performing loans, lost $1.21 billion during the most recent quarter, compared with a profit of $1.22 billion last year. The year-ago figures includes the gain from the sale of Smith Barney.

Profit in the Citicorp division, the unit that operates its primary businesses which are considered fundamental to future growth, rose 17 percent to $3.78 billion during the second quarter.