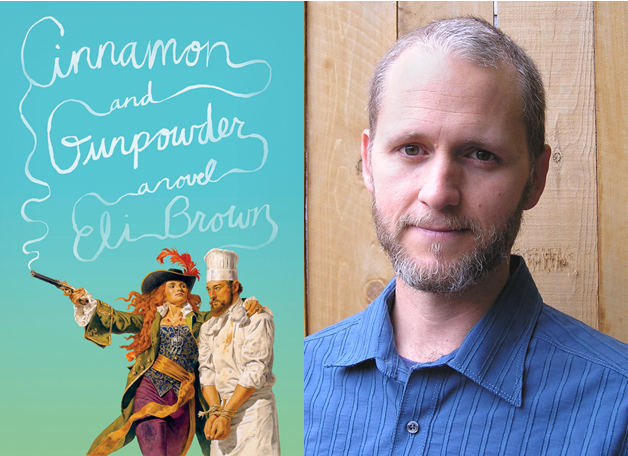 Eli Brown: It has a strange origin: I was bored with a yoga routine. I'd been doing this workout in my living room, following a DVD, and after about a week I was so tired of the monotonous music and instructions that I thought: "This thing really needs a juicy narrative to make it exciting." I envisioned an aerobic DVD series that provided a thrilling adventure with romance and battle scenes. Something like that would really bring people back every morning to sweat and get the next chapter of the story. Well, I'm not about to produce a workout video, but I am a writer, and the story I'd concocted in my head was pretty darn good. It had a charismatic female pirate, kidnapping, a slowly simmering love story, and plenty of action. Once I realized that the narrator was a cook, I knew I had to write it.

EB: I was fascinated to learn how the British shipping companies shaped history for all of us. It was a surprise to learn that many of the most effective (and nastiest) tactics corporate interests use to wring profits out of the world had already been perfected by the 1800s.

I was also fascinated to learn that one of the most successful pirate captains of all time was a woman. Ching Shih commanded not just one ship but an entire fleet of pirates. On top of that, unlike most pirates, she managed to retire from her career with wealth, health and prestige.

EB: I studied painting and sculpture in college. I spent a lot of time in the foundry pouring molten bronze into molds and praying they wouldn't explode with the heat. In an alternate life my office would be littered with buckets of plaster and globs of paint instead of stacks of paper. There's no question that my training as a visual artist has influenced my writing. As a painter I learned that the hard work that goes into preparing a canvas is not wasted simply because it's covered up -- it enhances the surface. The same is true for writing; I don't mourn the pages I throw in the trash.

It's actually hard to imagine not writing. When people ask me this question I sometimes think: "Well maybe I would be a cook...a cook who writes in his free time!"

EB: I'm rereading two classics right now: Mark Twain's "Roughing It" and Joan Didion's "White Album." Twain is still so funny. When I read it in public I have to keep myself from cackling out loud. Didion's essays are miraculously complex, at once sober and dazed, surgically precise and yet sweeping. She's one of those masters who make writing look easy.

EB: I'm putting the finishing touches on a quirky little project: it's a regional cookbook set on an island I invented. It features a fictitious culture, an imagined history and holidays, but the recipes are real and, if I do say so myself, delicious. And, of course, a new novel is already pushing itself forward into my consciousness, but I have much more work to do before I can say much about it.

For more on "Cinnamon and Gun Powder," visit the Macmillan website.