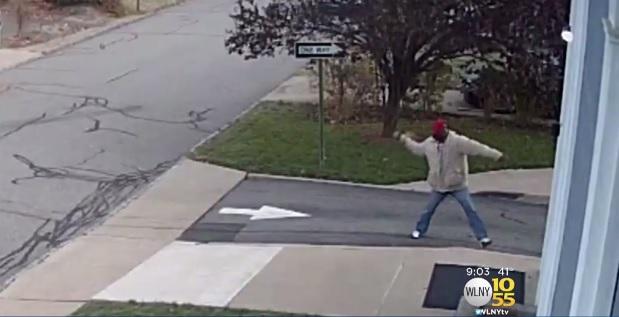 The Morris County Prosecutor's office said Zuri C. Towns, 45, of Morristown, was arrested Sunday by police detectives. Towns issued a statement confirming that he was responsible for the vandalism and saying he acted alone, prosecutors said.

"It angered me," said the Rev. Robert Rogers, pastor of the church. "It really angered me to see someone disrespect a place of worship."

"It doesn't feel too good -- it really doesn't," added churchgoer Edward Taborn. "In either one of these churches, as long as I've been here, this is the first time I've seen something like this happen."

Shattered glass, scattered letters, and broken windows -- the churches which were targeted got hit hard in the overnight hours between Friday and Saturday.

"When I rode past it earlier I couldn't believe someone would do something like this," churchgoer Phyllis Gibson told CBS New York.

"I feel disturbed, very, very disturbed," Gibson's daughter, Sehkai Wevv, said. "Somebody would do this to my home church? It's like, what were they thinking? What was going through their minds? I'm just appalled."

Towns had attended services at one of the churches as a minor, prosecutors said. But investigators did not explain why he allegedly damaged the houses of worship.

"It's disheartening to hear these stories. It's unfortunate," another churchgoer said. "We're in a sad time."

"You can't lock yourself in the house and never come out, so you just got to keep living," said churchgoer Vera Berry.

Added Morristown Mayor Timothy Dougherty: "We take this very seriously, and all resources are being deployed to make sure all services that take place today, that there are no problems"

The churches that were targeted are all African-American churches, and police had initially investigated the acts of vandalism as bias crimes. But prosecutors later said no evidence showed a motive of bias.