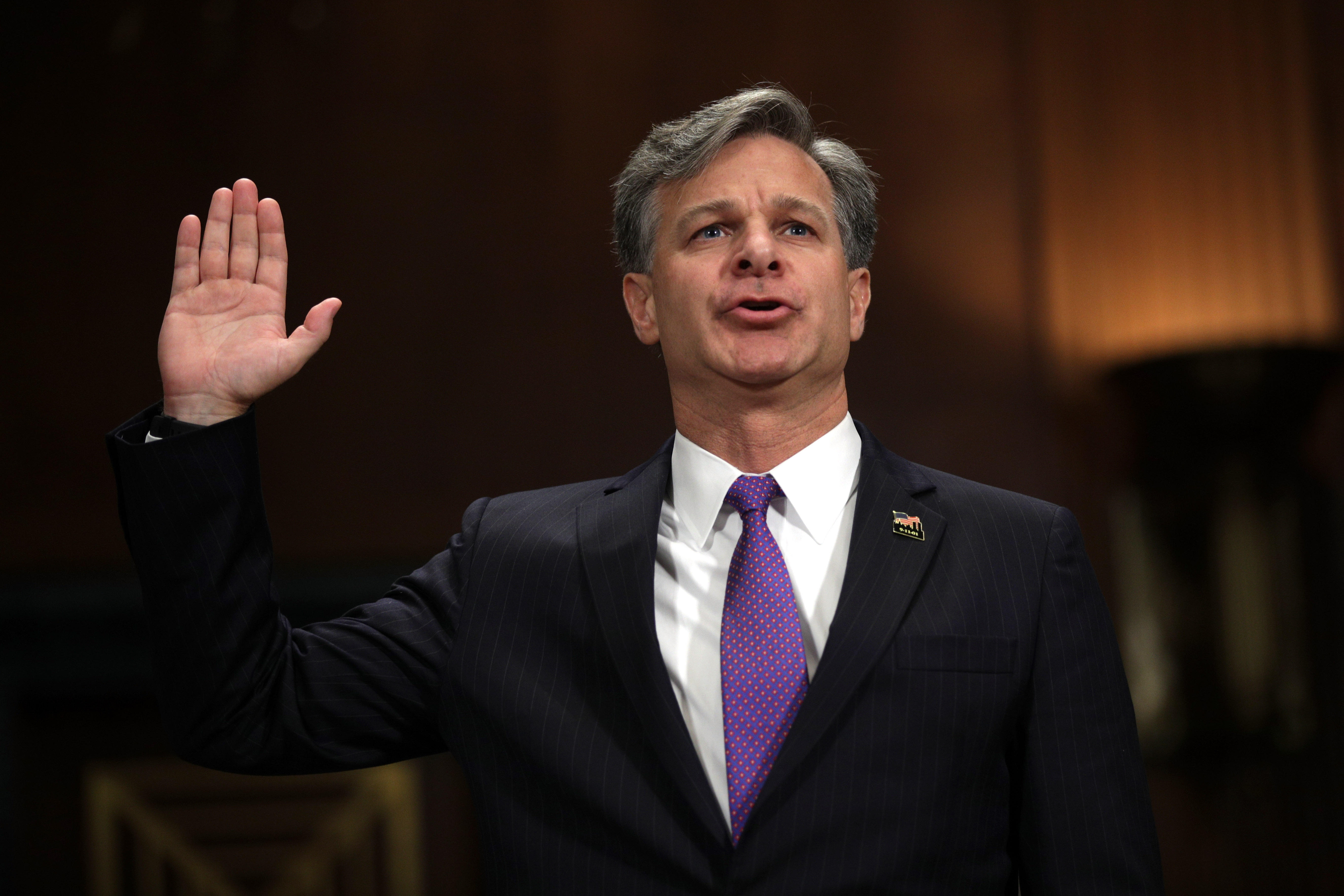 Christopher Wray, who testified before the Senate Judiciary Committee on Wednesday as part of his confirmation hearing to be the next FBI director, told lawmakers he would refuse to take any "loyalty" pledge if asked by the president and denied having ever been asked to make such a pledge.

"My loyalty is to the Constitution and the rule of law. Those have been my guideposts throughout my career, and I will continue to adhere to them no matter the test," said Wray.

Wray's confirmation hearing comes just two months after President Trump abruptly fired his predecessor James Comey. Comey had previously stated that Mr. Trump had asked for his loyalty, but Comey told Congress in a separate hearing that he would only provide "honest loyalty" to him.

Wray addressed many of the issues that were raised during Comey's firing, including whether he viewed obstruction of justice as a serious crime (he called it "deadly serious") and if he would ever "let go" of a case if the president or a top official pressured him to.

"I would take appropriate action which would include potentially having to resign," Wray responded when pressed on the topic further.

Wray also answered questions if he would ever take a private meeting with Mr. Trump, one similar to the situation Comey was put in.

"I think it would depend on the circumstances," Wray said, adding that while his preference is for other officials to be present, he noted that a "national security matter" might call for meeting alone.

Wray also addressed the ongoing investigation into Russian meddling of the 2016 election, an issue he said has to be a top priority for the Bureau, as well as the recent revelation that last year, Mr. Trump's eldest son Donald Trump Jr. met with a Russian lawyer who was said to have damaging information about Hillary Clinton.

When asked to respond to the release of emails related to Trump Jr.'s meeting, Wray said, "I would think you would want to consult with some good legal advisers before you do that."

Asked if Russia is a friend of the U.S. or an enemy, Wray said that the U.S. should deal with Russia "very warily," adding that he doesn't believe Special Counsel Bob Mueller is on a "witch hunt," as the president has periodically suggested.

Mr. Trump has said of Wray that he's a "man of impeccable credentials."

Wray, a graduate of Yale University and Yale Law School, was nominated by President George W. Bush to be  Assistant Attorney General in charge of the Criminal Division and served in that position until 2005.

See the earlier live blog of the confirmation hearing below:

Pressed by Sen. Richard Blumenthal of Connecticut, Wray committed that he would take acts like obstruction of justice or perjury seriously if confirmed as Director.

While he denied having any knowledge that there had been any acts of perjury in connection with the ongoing investigation into Russian interference, he told lawmakers he would provide whatever appropriate support needed to Special Counsel Mueller if such a crime had been committed.

When asked again about being asked to take any sort of loyalty pledge, Wray said he would have refused to take one anyways.

"My career has consisted of an awful lot of times telling people things they don't want to hear, and talking people out of bad ideas.

When asked by Sen. Ben Sasse of Nebraska if the intelligence community is "adequately investing in cyber challenges", Wray said "my sense is that as much as everybody is talking about threats, I have the sense we are just scratching the surface of how grave the threats really are and about to be before we blink and wake up."

He added that cyber "permeates every aspect of national security and become part of fabric of our security of also the threats to our security," noting that it would be hard for him "to imagine we're doing nearly enough and we can do better."

Wray says election integrity has to be "top priority"

"The integrity of elections has to be a top priority, its at the core of who we are as a country, any threat whether from a nation state or non state actor needs to be taken seriously," says Wray of cyber attacks on the U.S. elections.

Earlier, Wray said that there was "no reason to doubt" that Russia had meddled in the election, noting his knowledge of the investigation was based only on the information known to the public released by the intelligence community.

Wray says he would not just "let a case go"

Asked by Sen. Amy Klobuchar of Minnesota, Wray responds point-blank, "no" if given a request from the president or a top official to let a case go.

"I would take appropriate action which would include potentially having to resign," Wray adds when pressed on the response.

Wray is asked if he was asked for a loyalty oath

Wray stated that his loyalty is to "the Constitution, the rule of law and the FBI."

Wray doesn't commit to not meeting alone with Trump

During an exchange with Sen. Dick Durbin, D-Illinois, Wray was asked if he would meet alone with the president.

"I think it would depend on the circumstances, senator," Wray said, adding that while his preference is for other officials to be present, he said that a "national security matter" might call for meeting alone.

Wray says he's "not in a position" to say whether Donald Trump Jr. should have taken meeting with Russian lawyer

Sen. Lindsey Graham, R-South Carolina, read from the email exchange between the president's eldest son and the intermediary, Rob Goldstone, about meeting with a Russian lawyer who offered compromising information on Hillary Clinton.

Asked if Donald Trump Jr. should have taken the meeting, Wray claimed he was "hearing for the first time" the description of their conversation.

Pushed further, Wray said, "I would think you would want to consult with some good legal advisers before you do that."

Asked if Russia is a friend of the U.S. or an enemy, Wray said that the U.S. should deal with Russia "very warily." Wray said he doesn't believe Special Counsel Bob Mueller is on a witch hunt as the president has suggested.

Wray agrees that waterboarding is "torture" and "illegal"

Wray was asked if he could commit to informing the committee if he witnesses or learns of any efforts to interfere with the Special Counsel's investigation. Wray said he would do so assuming he can "legally" and "appropriately." He said he has "enormous respect" for Mueller.

Wray denies discussing Comey firing with anyone in the White House

During an exchange with Sen. Dianne Feinstein, D-California, the top Democrat on the panel, Wray said, "I did not discuss those topics with anyone at all with anyone in the White House." He said he only just spoke with Deputy Attorney General Rod Rosenstein about Wray considering the position of FBI director.

Wray's view of independence of FBI as Director

"I believe to my core that theres only one right way to do this job and that is with strict independence, by the book, playing it straight," Wray says in response to Grassley's line of questioning of his political independence if confirmed. He says he would execute the role "without fear, favoritism and certainly without regard to political partisan influence."

"Anyone who thinks I would be pulling punches as FBI Director, sure doesn't know me very well," adds Wray.

"I'm not familiar yet with the bureau's internal processes but there needs to be a process for appropriate concerns to be raised, Wray added, noting whistleblowers can play a "very important role in ensuring accountability."

Wray: "My loyalty is to the Constitution and the rule of law"

Wray provides opening statements, highlighting his career in the Department of Justice and in public service.

Working at the DOJ during the attacks on 9/11, Wray says he witnessed the FBI's "extraordinary capabilities as the people there moved heaven and earth to try to ensure that horrific attacks like those on September 11th never happen again."

"The Bureau has never grown complacent and continues to work tirelessly every day to protect all Americans," he added.

If given the opportunity to serve as Director, Wray said, "I will never allow the FBI's work to be driven by anything other than the facts, the law and the impartial pursuit of justice. Period. Full stop."

Seemingly alluding to Comey's "loyalty" test posed by Mr. Trump, Wray says "my loyalty is to the Constitution and the rule of law. Those have been my guideposts throughout my career, and I will continue to adhere to them no matter the test."

Feinstein: "This is probably as good as it gets"

The audience and chamber laughs as Ranking Member Sen. Dianne Feinstein jokes about the hearing being a peak of the tenure of the FBI directorship.

"The reason Mr. Comey was dismissed because he would not pledge his loyalty to the president and lift the cloud on the Russia investigation," said Feinstein. She added, "All of this raises important questions for the next fBI head and for his independence."

"The FBI Director does not serve the president, he serves the constitution law and american people," she noted, adding that the next director "must be a leader who has integrity and strength to enable him to withstand any attempts of any political interference."

"The Director of the FBI is entrusted with a tremendous amount of power.  That power is subject to appropriate checks against the abuse of our civil liberties.  The Director is accountable to his leadership, and to the People's elected representatives," says Grassley.

He adds, "That is why the FBI Director has a 10-year term limit, and why there are no restrictions on the ability of any President to fire any Director, as President Trump did former Director James Comey."

Grassley calls the 10-year limit a "ceiling not a floor" adding that the Committee intends to "closely examine the circumstances of Mr. Comey's firing."

Grassley calls it a "demanding job" that requires a keen understanding of the law, sound management skills, calm under significant pressure, and a level head.

"From what I've seen so far from meetings with Mr. Wray and from looking at his record, he appears to possess these qualifications."

Grassley notes the bipartisan support Wray has garnered in endorsing his nomination, including former Attorney General Eric Holder who served under President Barack Obama. Holder released a letter Wednesday morning saying he can "attest to his outstanding reputation."

"The previous director, James Comey, said that the people at the FBI don't give a rip about politics.  But, Mr. Comey installed as his Deputy Director a man whose wife ran for Virginia State Senate and accepted almost a million dollars from Virginia Governor Terry McAuliffe's political machine. That's a lot of money for one state Senate seat."

Grassley says McCabe met with McCaullife, a "longtime friend and fundraiser for the Clintons", and claimed his FBI backgroudn was used in "setting up a meeting with the goal of getting McCAuliffe's wife to run for office.

"The Office of Special Counsel is reviewing whether that coordination was a violation of the Hatch Act, which prohibits partisan political coordination by FBI officials.  The Inspector General is reviewing whether Mr. McCabe should have been recused from the Clinton investigation based upon Mr. McCabe's financial ties to the Clinton political network," added Grassley.

Grassley also mentions that McCabe was involved in a sexual discrimination case, saying,"Just last week, it was reported that Lt. Gen. Michael Flynn wrote a letter in support of the female agent.  That means Lt. Gen. Flynn is an adverse witness to Mr. McCabe in a pending proceeding.  Yet, Mr. McCabe supervised a criminal investigation of Flynn, and allegedly wanted it pursued very aggressively."