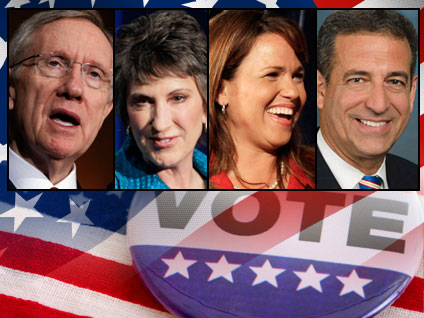 The primaries are all but over, and as the fall campaign season begins in earnest it finds the Democrats playing defense with a host of battles in usually-blue territory.

Their majority in the Senate - while perhaps not as tenuous as that in the House - may depend on how well they can defend it against the Republicans making gains in the climate of a tough economy. The map today shows some states where Democrats benefited from Obama's coalition just two years ago (like Nevada, Colorado, New Hampshire, among others) are back in play again - due at least in part to the different, smaller electorate that usually describes midterms.

Incumbents in California and Washington are threatened by strong challengers. Battlegrounds that tipped the Democrats' way lately (Pennsylvania, Ohio, Wisconsin) may not again this year. And perennial battleground Florida could host the wildest race of all, testing each party's pull on independent voters.

Most Competitive: The Early Toss-Ups

These races start the Fall looking like they could go either way. (All but Florida are currently Democrat-held seats.)

A few of these are places that Barack Obama won comfortably in 2008 or swung in '08 from red to blue. States don't always become competitive by themselves, of course; well-funded candidates need to jump in, and this year a host of them have stepped up to challenge Democratic incumbents.

There's a tension here in that midterms are never quite the same electorates as presidential years, being smaller (fewer people take part) and older, which may give the GOP a natural edge if that Obama turnout boost isn't there.

Colorado, for instance, which in some ways exemplifies the Democrats' 2008 success, with a large victory margin and huge turnout boosts around the Denver suburbs - this election could test that model.

What Democrats do have as a strength is veteran candidates in Boxer, Murray, Feingold and Reid who've won before, and states that do tend to lean their party's way overall.

Competitive Races with an Edge to Republicans

These could go either way in the end, but the GOP is starting the Fall with an advantage. Most of these seats are already Republican-held (Mo., N.H., Ohio, Ky.).

Some notes on these: In Arkansas, there's a larger theme playing out: whether a Democrat can still steer a moderate/centrist course and win a southern state.... So far it has only bought Blanche Lincoln some trouble this year. She was under fire from the party's left and labor groups in the primary, and seems in for an uphill battle this fall. This was a state (one of the few) that went more for John McCain in 2008 than President Bush in 2004.

Ohio, Pennsylvania and New Hampshire are perennially on the list swing states, of course. Republicans could have an edge here now in large part because the electorates that helped swing them to the Democrats recently (younger and newer voters, especially) don't historically materialize in a midterm... though we'll watch that.

In part, too, the Republicans are going to push hard to make gains in the middle class suburbs that tip these states, where spending concerns and a sour economy will probably get them a hearing. We'll be keeping an eye on the areas around Nashua, New Hampshire, the counties around Philadelphia (where President Obama got turnout boosts and Joe Sestak is going to need that again) and certainly the regions throughout Ohio around Columbus and Canton, where last cycle's Democratic performance levels may be at risk.

Competitive Races with an Edge to Democrats

These are currently Democrat-held.

Connecticut is a state that certainly leans blue in national elections and Blumenthal still fares well in the polls this summer. He'll face a tough fight and a lot of spending from Linda McMahon to get her message out, though, but one question for the Republican remains whether she can solidify her base after a tough primary season.

In West Virginia, popular governor Joe Manchin looks to hold the late Senator Robert Byrd's seat for the party -- but it is no sure thing, especially in a state that has been leaning Republican.

The Republicans' math for taking back the Senate, in terms of seats they could win and must win, probably got harder (but didn't disappear) with the loss of Mike Castle in Delaware's GOP primary yesterday to Tea Party-backed Christine O'Donnell (at left). Castle -- a proven winner in statewide elections there -- had a solid chance to win Vice-President Biden's old seat and tally a pickup for the Republicans in the broader electorate of the general.

On the other hand, the Tea Party's wins there and across the country with its clearly motivated voters have proven they know how to impact elections.

O'Donnell Fires Back After Rove Calls Her "Nutty"Christine O'Donnell Wins, and the GOP LosesO'Donnell: "The People of Del. Have Spoken"

It was indeed an eventful year in the primaries. Incumbents were beaten up and some dispatched altogether, and many of each party's so-called "establishment" picks (often, those endorsed from officeholders in Washington) were targeted. Democrats in Pennsylvania ousted Arlen Specter in favor of Joe Sestak and gave tough fights to Blanche Lincoln in Arkansas and Michael Bennett in Colorado. Across the nation from Alaska to Florida, Colorado and Nevada to Kentucky and now Delaware, Tea-Party backed or endorsed candidates and political newcomers picked up Republican nominations.

Now, control of the Senate could rest on how all those candidates perform on the bigger stage of the general election - specifically, whether they can both solidify their bases after tough primaries (essential in any winning campaign) and, just as importantly, appeal to a wider electorate.

Anthony Salvanto is CBS News Elections Director. You can read more of his posts in Hotsheet here.