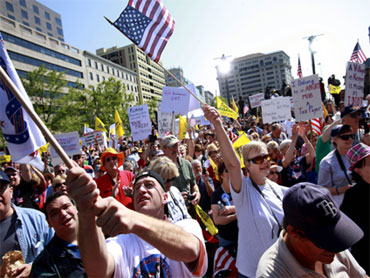 Christine O'Donnell's shocking winin the Delaware Republican primary was driven in large part by a group called the Tea Party Express, which energized her candidacy by vowing to spend $250,000 to help her beat moderate Rep. Mike Castle.
National media attention and an endorsement from Sarah Palin followed the Tea Party Express announcement, and a campaign that was once an afterthought ended up a winner.

In an interview with CBS News, the head of a prominent Tea Party group referred to the Tea Party Express as an "astroturf" group.

"They are a top down non-grassroots organization pretending to be grassroots," the Tea Party leader said, going on to cast the group as a "great example of everything that's been wrong with the Republican Party."

"Instead of relying on local people's preferences for office, the Tea Party Express picks candidates that advance their own political expediency," the Tea Party leader added. Other tea party groups, which are very proud of their grassroots nature, complain that the Tea Party Express, which is run by a known GOP political group with 30 years of campaign experience, is trying to co-opt the movement.

The Tea Party express has certainly backed candidates who aren't favored by the Republican establishment, including O'Donnell, Miller, Kentucky's Rand Paul and Utah's Mike Lee. But it has also picked candidates not necessarily aligned with local tea party preferences.

In Nevada, a number of Tea Partiers wanted Sue Lowden to take on Senate Majority Leader Harry Reid, not the Tea Party Express choice, Sharron Angle, who ended up winning the nomination. The Tea Party Express' endorsements of Democratic Rep. Walt Minnick in Idaho and moderate Republican Scott Brown in Massachusetts also raised eyebrows, as did the decision by the Tea Party Express' Mark Williams to pen a satiric letter beginning, "We Coloreds have taken a vote and decided that we don't cotton to that whole emancipation thing."

But the fundamental disconnect is less about candidates or even individuals than it is about local vs. national control. The best Tea Party, from the perspective of many who see themselves as tea partiers, is a local Tea Party. That ethos is well represented by the Tea Party Patriots, a decentralized umbrella group that operates far differently that the Tea Party Express.

The Tea Party Patriots have no centralized authority, opting instead for a hivelike, "organized but not organized" structure, as National journal reports:

"The organization has no offices, dwelling instead in activists' homes and laptops. Martin says it has raised just over $1 million in the past year, a trivial amount by the standards of national political organizers. About 75 percent of the group's funding comes from small donations, $20 or less, she says.

By conventional measures such as staff and budget, then, the Tea Party Patriots is minuscule. Viewed another way, however, it is, to use [co-founder and national coordinator Jenny Beth] Martin's expression, "gi-normous." Lacking dues or bylaws, the network's closest thing to a membership roll is the list of groups that have registered with its website, now approaching 3,000 and spanning the country. The website, teapartypatriots.org, lists almost 200 tea parties in California alone."

History suggests it's difficult for decentralized movements to endure, however - which is why many Tea Partiers fear that their movement will soon be little more than just another top-down conservative interest group. For Tea Partiers to whom Washington culture in anathema, that prospect - embodied by the Tea Party Express - is bitter tea.

Poll: One in Five Support Tea Party Movement
Tea Party Supporters: Who They Are and What They Believe