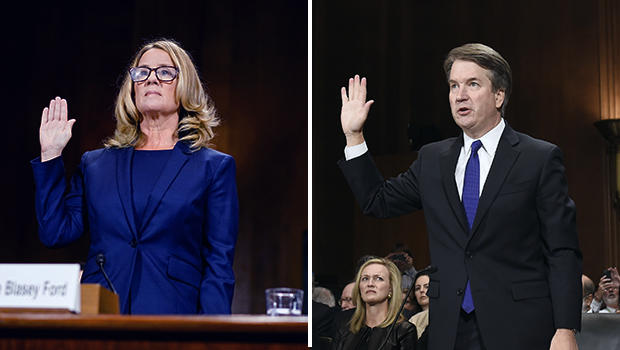 Here are the major takeaways from the hearing:

Senators believe Ford is credible, and she is "100 percent" sure Kavanaugh assaulted her

Judge Kavanaugh's accuser Christine Blasey Ford provided an emotional recounting of the alleged assault, which she says took place when both were in high school. While there are gaps in her memory -- the exact time and place, how she got home afterward -- her recollection was vivid. Overcome with tears several times, Ford slowly and softly detailed her experience of being pinned to a bed at a high school party as a 15-year old sophomore as she said Kavanaugh put a hand over her mouth to stifle her screams, and his friend Mark Judge stood by, alternately goading him on and telling him to stop.

Judge has issued two statements via his attorney denying any recollection of the behavior or incident described by Ford, the most recent one being a letter addressed to Committee Chairman Chuck Grassley and ranking Democrat Sen. Diane Feinstein after the hearing on Thursday. In that letter Judge says he does, "not recall the events described by Dr. Ford in her testimony before the US Senate Judiciary Committee today. I never saw Brett act in the manner Dr. Ford describes."

The most visceral response Ford gave was during questioning by Sen. Patrick Leahy of Vermont, a Democrat, who asked what the "strongest" memory she had from her alleged encounter with Kavanaugh. Ford, a doctor of psychology who wove clinical language into her responses throughout the hearing, replied that it was her assailants' laughter.

Ford offered compelling and at times scientific explanations about her memory and the long-term impact of the assault, leaving many lawmakers, including concerned Republicans, assessing her story as truthful and credible. Ford, with quiet certainty, answered questions and pushed back against suggestions that perhaps she had misremembered who carried out the assault on her during a high school party. Asked outright if her allegations of assault were a case of "mistaken identity" from over 30 years ago, Ford responded, "Absolutely not." She later testified that she was "100 percent" certain that it was Kavanaugh who carried out the assault.

Ford testified that in the years since she has experienced anxiety, phobias and PTSD-like symptoms. In the immediate years following the incident, Ford said she suffered academically and had difficulties forming friendships, particularly with men.

Prosecutor Rachel Mitchell had a muted presence in hearings

Republicans on the Judiciary Committee had chosen Mitchell to act as special counsel during the hearing, with the expectation that they would yield their time to her to ask the witnesses questions. Mitchell is a career prosecutor with decades of experience prosecuting sex crimes, comes from the Maricopa County Attorney's Office in Phoenix, Arizona where she heads the Special Victims Division, which covers sex crimes and family violence.

Mitchell was the only person to question Ford on the Republican side. She had a friendly presence, but her line of questioning was more based on procedure than the core allegation itself. She asked Ford about how she had arrived at the hearing -- Ford, who lives in California, had previously expressed fear of flying, although she acknowledged she took a plane in this instance and also has flown on vacations. And she asked a few questions about who had paid for a polygraph test Ford has taken. She asked Ford about where she lived, and about her relationship with the people involved in her allegations.

However, during Kavanaugh's testimony Mitchell was sidelined. Although she asked him questions on behalf of Sen. Chuck Grassley and Sen. John Cornyn, the remaining senators each interacted with Kavanaugh personally.

Mitchell had been chosen in part because Republicans were wary of what it would look like to have 11 men questioning a female sexual assault victim. this was not a concern during Kavanaugh's testimony.

If Republicans were concerned that Ford's compelling testimony might do damage to Kavanaugh's nomination, Kavanaugh's angry, emotionally-charged opening remarks and exchanges with Democrats brought him back from the brink.

"This confirmation process has become a national disgrace," he said, chastising the Democrats. "Since my nomination in July, there's been a frenzy on the left to come up with something, anything, to block my confirmation."

"Advise and consent," he said, has been replaced by "search and destroy."

But he vowed he would not allow Democrats to force him to withdraw. "You may defeat me in the final vote, but you will never get me to quit. Never," he declared. "I am here to tell the truth. I have never sexually assaulted anyone."

Kavanaugh had released prepared remarks on Wednesday in advance of the hearing, but opted instead to deliver a rebuke of the last two weeks of the confirmation process. He slammed Democrats for crafting a "smear" against him as a series of accusers --including some who remained anonymous -- continued to come forward in the days following his initial confirmation hearing. He called the proceedings a "circus," suggesting that the last two weeks of the confirmation process has been a "calculated and orchestrated political hit," perhaps even retribution for Democrats' outrage over the 2016 presidential election.

"What comes around comes around. I am an optimistic guy. I always try to be on the sunrise side of the mountain, to be optimistic about the day that is coming," Kavanaugh said. "But today I have to say that I fear for the future."

Citing the impact on his family, Kavanaugh broke down in tears, saying the process had "permanently destroyed" them. He described how his 10-year-old daughter told his wife, "We should pray for the woman" who accused him.

He was asked to provide explanations for the notations on his 1982 calendar, his high school yearbook, his activities as a high school student and his penchant for drinking beer.

Republicans opted to ask their own questions instead of relying on the appointed outside prosecutor, in order to defend Kavanaugh and launch their own attacks on Democrats. Kavanaugh had aggressive exchanges with senators, often turning the questions back onto them. Asked about his drinking by Sen. Sheldon Whitehouse, D-Rhode Island, Kavanaugh said he liked beer, then asked, "What do you like to drink?"

He stumbled during one notable exchange with Sen. Amy Klobuchar, D-Minnesota -- she mentioned her father's alcohol abuse and asked Kavanaugh whether he ever "drank so much that you didn't remember what happened the night before or part of what happened."

Kavanaugh responded, "You're asking about blackout -- I don't know, have you?"

Klobuchar asked again, "Could you answer the question, judge? I just -- so...that's not what happened, is that your answer?"

Kavanaugh turned the question on her again. "Yeah -- and I'm curious if you have."

"I have no drinking problem, judge," she said.

"Nor do I," said Kavanaugh.

After the break, however, Kavanaugh apologized for turning the question on her. "I'm sorry I did that. This is a tough process," he said. "I'm sorry about that."

But it was the fiery exchanges during Kavanaugh's testimony that left the White House, namely President Trump, pleased with the judge's performance. Mr. Trump tweeted shortly after the hearing concluded, "Judge Kavanaugh showed America exactly why I nominated him. His testimony was powerful, honest, and riveting."

A White House official later confirmed to CBS News that the administration was "much happier" that the Republican senators took over the questioning of Kavanaugh, describing the mood at the White House as collectively feeling emboldened by Kavanaugh's "passionate" testimony, according to the official.

South Carolina Sen. Lindsey Graham condemned his Democratic colleagues for their handling of the confirmation process, calling what Kavanaugh had experienced a "sham." Graham declined to defer to Mitchell and questioned Kavanaugh himself, creating a precedent followed by subsequent Republicans. He accused Democrats of opposing Kavanaugh's nomination for their own political ends.

"If you wanted an FBI investigation you coulda come to us," Graham said, after Democrats on the committee have called for an FBI investigation into Ford's claims. "What you want to do is destroy this guy's life, hold this seat open, and hope you win in 2020. You've said that, not me."

He also pointed out that he had voted for Sonia Sotomayor and Elena Kagan, two of President Barack Obama's nominees to the court.

"When you see Sotomayor and Kagan tell them that Lindsey said 'hello,'" Graham said, indicating that he believes Kavanaugh will be confirmed. "Because I voted for them. I would never do to them what you've done to this guy. This is the most unethical sham since I've been in politics. And if you really wanted to know the truth, you sure as hell wouldn't have done what you've done to this guy."

Graham's line of questioning was notable because it reset the tone of the Republican response to Ford's allegations. Instead of deferring to Mitchell to ask calm, procedural questions, Republicans after Graham instead often used their time to defend Kavanaugh and ask him softball questions. Graham has been a passionate defender of Kavanaugh, and his performance at the hearing ushered in other Republican remarks firmly defending the nominee, as well. The toxic state of politics in the Senate at this moment was evident throughout Kavanaugh's portion of the hearing.

Some Democrats in the hearing pushed Kavanaugh to call for an FBI investigation into the unproven allegation against him. Kavanagh suggested that he will do whatever the committee needs.

Sen. Dick Durbin, a Democrat from Illinois, asked Kavanaugh to turn around to White House counsel Don McGahn, seated in the front row, and ask him to push an FBI investigation.

"I've got a suggestion for you, right now, turn to your left in the front row to Don McGahn, counsel to President Donald Trump," Durbin said. "Ask him to suspend this hearing and nomination process until the FBI completes its investigation, and the charges made by Dr. Ford and others and goes to bring witnesses forward and provides that information to this hearing."

Sen. Mike Lee, a Utah Republican, criticized Democrats for calling for using their time to call for an FBI investigation instead of questioning Kavanaugh on what happened.

Republicans are huddling after the Kavanaugh hearing — but at this point, a delay in the vote process seems more unlikely than likely. The Senate Judiciary Committee had already scheduled a Friday vote on Kavanaugh.

President Trump, who had said he wanted to hear what Ford had to say, tweeted after the hearing concluded that a vote needs to happen. He did not mention Ford.

"Judge Kavanaugh showed America exactly why I nominated him," the president tweeted. "His testimony was powerful, honest, and riveting. Democrats' search and destroy strategy is disgraceful and this process has been a total sham and effort to delay, obstruct, and resist. The Senate must vote!"