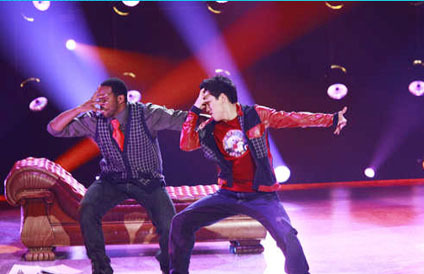 NEW YORK (CBS) Wednesday night's two-hour episode of "So You Think You Can Dance" sure did not disappoint as the top nine remaining contestants continued to battle it out on the dancing stage.

PICTURES: "So You Think You Can Dance" Season 7 Top 11

Along with a solo routine, each dancer paired up with an All-Star and was required to deliver a routine that reflected his or her personal dance inspiration.

Once again, ballet dancer Alex Wong did not disappoint. Paired with Stephen "Twitch" Boss, the two produced the best performance of the evening as the season's first same-sex partnered routine. Their hip-hop routine, choreographed by Tabitha and Napoleon D'umo, received an extended standing ovation and perfect remarks from each judge.

"I have never, never, in "So You Think You Can Dance" history, heard a roar from a crowd like this - ever," host Cat Deely said immediately after Wong's performance.

Other high remarks of the evening went to Adechike Torbert, while tap dancer Melinda Sullivan, spared from elimination last week,  delivered a weak performance with her Salsa routine.

The dancing pool will soon be narrowed down to eight contestants as one more dancer will be sent home on tonight's result show.