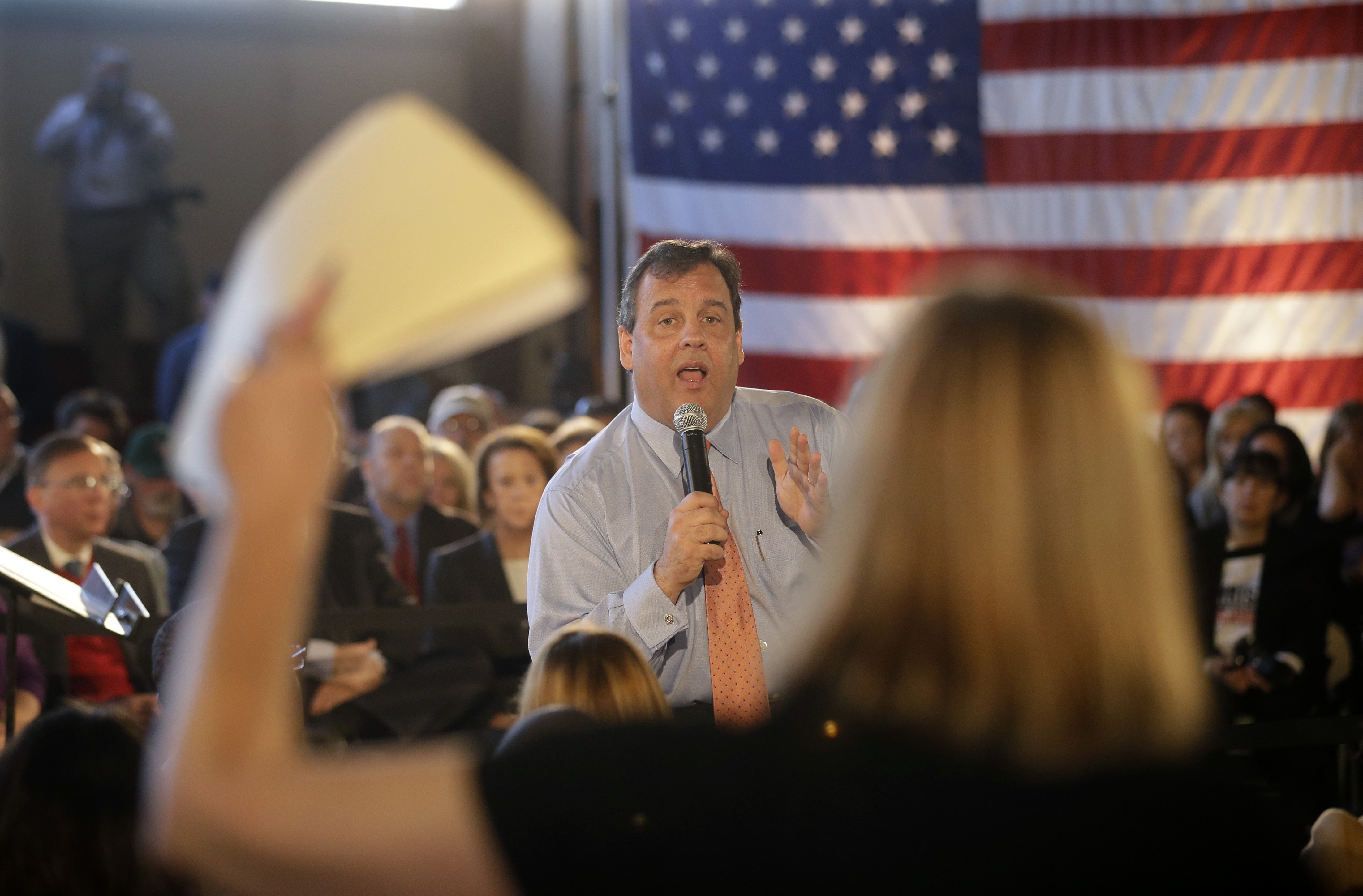 At least a dozen protesters disrupted a town hall meeting Tuesday with New Jersey Gov. Chris Christie, criticizing him over the distribution of Superstorm Sandy recovery aid and a for political payback scandal overshadowing his administration.

The demonstrators were quickly led outside by police, as some chanted "New Jersey deserves better."

It was the second consecutive town hall to be disrupted by Christie opponents. But unlike last week, when a half-dozen student protesters seemed to take Christie by surprise, he was prepared Tuesday, even warning the crowd to expect some chaos.

He blamed a union, the Communications Workers of America, for orchestrating the disruptions, and coached the audience to wait for the protesters to be removed. One of the hecklers at Christie's earlier town hall said he was affiliated with the left-leaning Working Family Alliance.

"They are recruited by the people we have been standing up against for the last four years," Christie said.

Security also had been ramped up, and a man in plainclothes who later identified himself as a member of the New Jersey State Police snapped pictures of the protesters as they filed out.

"Why haven't you fired David Samson?" yelled one woman as she was escorted out, referring to a Christie political appointee embroiled in the scandal. The chair the Port Authority of New York and New Jersey, Samson faces allegation of voting to spend authority money on projects benefiting clients of his private law firm.

The transit agency is at the center of the political retribution scandal swirling around the administration and raising questions about his chances as a 2016 presidential candidate.

Christie's top two deputies at the agency have been linked to a plot to back up traffic near the George Washington Bridge in an apparent attempt to punish a Democratic adversary. Emails showed Samson helped the aides retaliate after another executive at the Port Authority reopened the blocked traffic lanes.

Some of Tuesday's protesters dressed for the occasion. A few wore T-shirts with the message, "do you believe there was a GWB traffic study." It was a reference to a cover story given to lawmakers investigating the lane closings that has since been discredited.

Christie has adamantly denied any knowledge of any political motivations behind the lane closures, and as of last month, he said, "I still don't know whether there was a traffic study."

Minutes before the protesters' disruption, Christie criticized the head of the legislative panel who is investigating the lane closings, Assemblyman John Wisniewski, a Democrat and frequent critic of the governor's.

A parallel criminal investigation is being conducted by the U.S. attorney's office.

Christie had hoped to focus the town hall on the state's ongoing effort to buy out repeatedly flooded residents whose homes are in floodplains. The plan is to destroy the houses and return the land to its natural state. Some 170 property owners in neighboring municipalities, including South River, have settled with the state so far.

The administration has also been criticized for how long it's taken to distribute relief money to homeowners since the superstorm, New Jersey's worst natural disaster, struck 16 months ago. The administration fired a major Sandy contractor over performance issues; Christie told the crowd Tuesday that state agencies are getting better as they gain experience in dealing with such a disaster.