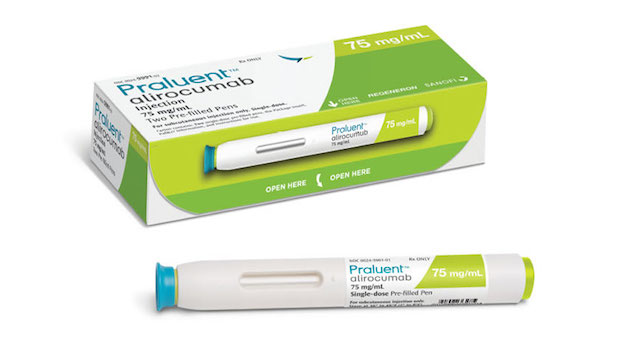 ORLANDO, Fla. -- A newer cholesterol drug, used with older statin medicines, modestly lowered heart risks and deaths in a big study of heart attack survivors that might persuade insurers to cover the pricey treatment more often. Results on the drug, Praluent, were announced Saturday at an American College of Cardiology conference in Florida. It's the first time a cholesterol-lowering drug has reduced deaths since statins such as Lipitor and Crestor came out decades ago.

"It's the ultimate outcome; it's what matters to patients," said study leader Dr. Philippe Gabriel Steg of Hospital Bichat in Paris.

But the benefit was small - 167 people would need to use Praluent for nearly three years to prevent a single death.

"That's a high cost" that may still hinder its use, said one independent expert, Dr. Amit Khera, a preventive cardiologist at UT Southwestern Medical Center in Dallas and a spokesman for the American Heart Association.

The drug's makers, Sanofi and Regeneron Pharmaceuticals, sponsored the study and said they would work with insurers on pricing to get the medicine to those who need it the most.

Doctors focus on lowering LDL, or bad cholesterol, to prevent heart problems. Statins are the main medicines for this, but some people can't tolerate or get enough help from them.

Praluent and a similar drug, Amgen's Repatha, work in a different way and lower cholesterol much more. Patients give themselves shots of the medicine once or twice a month. The drugs have been sold since 2015 but cost more than $14,000 a year, and insurers have balked at paying without proof that they reduce health problems, not just the cholesterol number.

Last year, a study showed Repatha cut heart problems but did not improve survival. The new study tested the rival drug, Praluent, for a longer time and in patients at higher risk - nearly 19,000 people who in the previous year had a heart attack or chest pain serious enough to put them in the hospital.

All had LDL over 70 despite maximum statin use. Half were given Praluent and the rest, dummy shots. Praluent was started at a lower dose and increased if LDL did not drop below 50.

That worked out to a 15 percent lower risk with Praluent. Benefits were greater for those whose LDL was 100 or more at the start of the study. The drug had no major safety issues.

"We need to reset our expectations" and realize that benefits for any new drug are going to be fairly small when added to already good treatments such as statins, said Dr. Jeffrey Kuvin, conference leader and cardiology chief at Dartmouth-Hitchcock Medical Center. The new drugs clearly help people at high risk and are not aimed at people at low risk, such as those who have high cholesterol but have never had a heart attack, he said.

"I've been unconvinced" of the drugs' benefits but now may prescribe them for certain very high risk patients, said Duke University cardiologist Dr. Christopher Granger. But preventing fewer than one heart problem a year at the drug's current price is not cost-effective, he said.

"This is a fantastic tool," CBS News medical contributor Dr. David Agus said in 2015 after the drug won approval from the FDA. "It is a very important drug."

An independent group, the Institute for Clinical and Economic Review, on Saturday released a new range for what Praluent should cost, based on the new results - $2,300 to $3,400 per year for people like those in the study. A price of $4,500 to $8,000 per year would be justified for patients at higher risk, with LDL over 100.

From 300,000 to 400,000 people in the U.S. each year fall in that second category. Praluent's makers say they will aim for those price ranges for insurers that remove barriers to coverage for people at the highest risk.