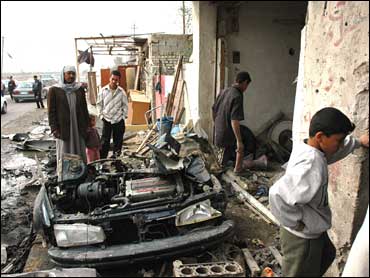 The attacks came after back-to-back bombings last month released chlorine gas, prompting the U.S. military to warn that insurgents are adopting new tactics in a campaign to spread panic.

Just after 4 p.m. Friday, a driver detonated explosives in a pickup truck northeast of Ramadi, wounding one U.S. service member and one Iraqi civilian, the military said in a statement.

That was followed by a similar explosion involving a dump truck south of Fallujah in Amiriyah that killed two policemen and left as many as 100 local citizens showing signs of chlorine exposure, with symptoms ranging from minor skin and lung irritations to vomiting, the military said.

Less than 10 miles away, another suicide bomber detonated a dump truck containing a 200-gallon chlorine tank rigged with explosives at 7:13 p.m., also south of Fallujah in the Albu Issa tribal region, the military said. U.S. forces responded to the attack and found about 250 local civilians, including seven children, suffering from symptoms related to chlorine exposure, according to the statement.

The most recent attack occurred Feb. 21 in Baghdad, killing five people and sending more than 55 to hospitals, a day after a bomb planted on a chlorine tanker left more than 150 villagers stricken north of the capital.

A suicide bomber driving a dump truck filled with explosives and a chlorine tank also struck a quick reaction force and Iraqi police in the Sunni city of Ramadi on Jan. 28, killing 16 people.

The military also said last month that they found a car bomb factory near Fallujah with about 65 propane tanks and ordinary chemicals it believed the insurgents were going to try to mix with explosives. Maj. Gen. William Caldwell, the chief U.S. military spokesman, called it a "crude attempt to raise the terror level."

Iraqi police said a suicide bomber driving a tanker truck detonated his explosives Friday in a line of cars waiting on the edge of the village of Amiriyah to enter Fallujah, killing at least six people, including two policemen, and wounding 75, including women and children, police said.

A doctor, Mohammed Fuad, said 15 seriously wounded people were brought to the Fallujah hospital and most were having difficulty breathing and their faces had a blue tinge in addition to their other wounds. He said they had been exposed to a poisonous gas. The U.S. military later said the gas was chlorine.

A car bomb also exploded Friday about six miles south of Fallujah, killing one person and wounding four others, police said, adding that the bomb was targeting the reception center of a tribal sheik who has denounced al Qaeda.

Both strikes carried the hallmarks of an increasingly bloody struggle for control of Anbar province — a center for anti-U.S. guerrillas since the uprising in Fallujah in 2004 that galvanized the insurgency.

U.S. military envoys and pro-government leaders have worked hard to sway clan chiefs and other influential Anbar figures to turn against the militants, who include foreign jihadists fighting under the banner of al Qaeda in Iraq. The extremists have fought back with targeted killings and bombings against fellow Sunnis.

In Other Developments:
Bombings and shootings targeted police patrols elsewhere in Iraq, killing five policemen, including two who died after a suicide car bomber struck the checkpoint they were manning near a Sunni mosque in western Baghdad. That attack left five other people wounded.

Meanwhile, an aide said Sadr City Mayor Rahim al-Darraji was still in the hospital after being wounded in an assassination attempt on Thursday but his condition was improving.

"He is getting better. God willing, he will leave the hospital as soon as possible," said the aide, who referred to himself as Abu Zahraa and declined to give more details.

Al-Darraji has been involved in negotiations with U.S. and Iraqi government officials seeking to persuade the Shiite militias to tamp down the violence against Sunnis, but the efforts have created tension in the ranks of Shiite militiamen and some blamed the assault — which also killed two bodyguards — on a faction unhappy about cooperation with the U.S. military, a local Mahdi Army commander said Friday.

Further signaling resurgent anger and opposition to the U.S.-Iraqi security crackdown in the militia stronghold of Sadr City, radical Shiite cleric Muqtada al-Sadr decried U.S. forces as occupiers Friday and called on his followers to "shout 'No, No America!"'

Thousands of Shiites flooded from the mosque where al-Sadr's statement was read by a preacher at Friday prayers, spilling into the streets of the Sadr City slum to protest the two-week-old American military presence there. The U.S. military says al-Sadr has gone to Iran.

American military leaders had credited al-Sadr — who was said to have ordered his Mahdi Army militia to put away its weapons and not confront U.S. and Iraqi troops — for the relatively effortless start of security patrols and raids in the Shiite slum, a no-go zone for U.S. forces until about two weeks ago.

Al-Sadr's message on the Muslim day of prayer and rest could signal a shift in his willingness to absorb the perceived indignity of the U.S. troop presence and wait out the security plan. Or it could have been nothing more than a reminder to his followers that he was watching carefully and was still their leader.

"We have often seen differing political views or differing statements coming out of many of the political organizations here in Iraq, not just the Sadr bloc or al-Sadr's organization," U.S. military spokesman Lt. Col. Christopher Garver said. "As we've said, we are, if anything, cautiously optimistic, but it's still very early."