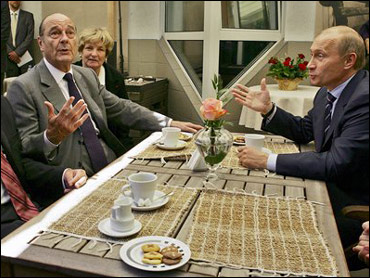 It's a rivalry for the ages — France vs. Britain, forever trading barbs over food, lifestyles and politics. Now, as Paris and London battle to host the 2012 Summer Olympics, the feud has heated up anew.

Britain's newspapers heaped scorn on French President Jacques Chirac, rebuking him Tuesday as "a man full of bile," after he reportedly trashed Britain's "bad food" and made a snide remark about mad cow disease.

"The Brits' odious `coup de bluff,"' the French daily France Soir countered over a cartoon accusing Britons of unwarranted grouchiness. The spat, it said, threatened to turn the Olympics decision into a "theater of arrogance."

On Wednesday, the International Olympic Committee announces the host city for the 2012 Games. Paris and London were both considered leading contenders Wednesday in a field that includes New York, Moscow and Madrid, Spain.

The two countries have developed close ties, with France a favorite vacation destination for Britons and many French finding Britain's business environment preferable to the one back home.

But the Olympics have awakened the fighting spirit in the historical rivals.

"This is a war between the English and the French, and I really want Paris to win," said Touhami Ben Younes, 54, a French delivery man.

The French newspaper Liberation reported Monday that Chirac made the remarks in Kaliningrad, Russia, during a conversation with German Chancellor Gerhard Schroeder and Russian President Vladimir Putin on Sunday.

"We can't trust people who have such bad food," Chirac was quoted as saying. He reportedly added that only Finland had worse food in Europe, and that mad cow disease was Britain's sole contribution to European agriculture.

Liberation, which said one of its reporters overheard the remarks, described them as joking and off-the-cuff. On Tuesday, it said Chirac's comments did not reflect the congenial mood of the leaders' discussions.

But Britons were not amused.

"Don't talk crepe, Jacques!" The Sun, Britain's biggest-selling newspaper, said in a commentary that savaged Chirac for dropping to "a new depth."

"His snide attacks on Britain expose him once and for all as a nasty, petty, racist creep," it said.

"A man full of bile is not fit to pronounce on food," food critic Egon Ronay was quoted as saying in a front-page story in The Guardian.

Blair, who was in Singapore pressing London's bid for the Olympics, did not comment directly. But when asked Monday whether the G-8 summit starting Wednesday in Scotland would be an anticlimax after the Olympic decision, he said:

"I won't say the G-8 summit would be an anticlimax to it because that would be undiplomatic and I know when I go there I will be in the presence of very diplomatic people," he said.

The Anglo-French rivalry dates at least to Shakespearean times, when the Bard once penned: "France is a dog-hole, and it no more merits the tread of man's foot." French novelist Stendahl delivered this biting 19th-century salvo: "The English are the most barbarous people in the world."

It came as both countries have been taking pains to improve sometimes testy relations — so much that Britain doctored its recent re-enactment of the historic Battle of Trafalgar to avoid the appearance of gloating over Napoleon Bonaparte's humiliating defeat.

The Sun warned that Chirac may have damaged his country's Olympic bid by criticizing food from Finland in the same conversation.

Although the British and French International Olympic Committee members are banned from voting, two Finnish IOC members will be voting, and the paper said their votes could be crucial.

Ingrid Newkirk, a leader of People for the Ethical Treatment of Animals, wrote Chirac a letter Tuesday disparaging the French for their "reputation for making anything that moves, with the exception of the poodle, into a cassoulet."

Meanwhile, France Info radio reported that Chirac — on a swing through Singapore to support his country's bid — pointedly dodged a question from a British journalist about the food flap.

"We're in the world of the Olympics, where the best win. Naturally, I hope that Paris will be the best," Chirac said.