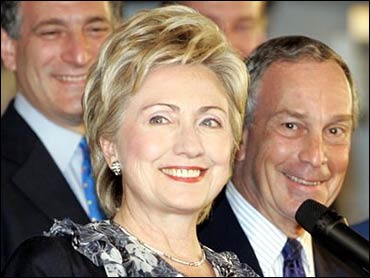 Sen. Hillary Rodham Clinton, Muhammad Ali and the leaders of Britain, France and Spain joined the final, frenzied stage of lobbying as the IOC prepared to choose a host for the 2012 Olympics after a high-powered, fiercely competitive five-city campaign.

The former first lady became the top political heavyweight for New York's delegation, which insisted its bid was gaining momentum ahead of Wednesday's vote by the International Olympic Committee.

"It's confusing and hard to predict," New York bid leader Dan Doctoroff said. "This is a completely open race. We feel, based on the feedback we've received from members of the IOC, that we've got a chance."

Ali, an Olympic boxing champion in 1960, also joined the New York team — posing gamely for photographers even though physical ailments limit his speaking ability. New York Mayor Michael Bloomberg, who guided Ali to the photo session, called him "the secret weapon" of the city's bid campaign.

Oddsmakers have long installed Paris — loser of bids for the 1992 and 2008 Games — as the favorite this time, followed ever more closely by London. Moscow and Madrid also are in the field, considered by many in the Olympic movement as the most prestigious ever.

Underscoring the lengths to which contenders were prepared to go, Russian officials said President Vladimir Putin — in his video address to the IOC on Wednesday — would speak publicly in English for the first time.

The IOC formally opened its session Tuesday evening with a ceremony at a downtown concert hall. In a speech to the members, IOC president Jacques Rogge suggested that the four cities that lose should consider bidding again in four years for the 2016 Games.

"They should know that the quality of their candidature file would give them an excellent chance," he said.

British Prime Minister Tony Blair arrived in Singapore on Sunday, while French President Jacques Chirac flew in Tuesday. The two leaders have sparred recently over European farm subsidies, and Chirac roiled the relationship further over the weekend by joking about mad cow disease and bad food in Britain.

"I'm not going to disparage anybody," he said. "I don't disrespect any of the cities that are bidding — everyone is doing their level best."

All five cities have flown in famous athletes, as well as government leaders, to promote their bids. Soccer superstars David Beckham of England and Raul of Spain, for example, have become rivals in Singapore even though they are teammates for Real Madrid.

Spanish Prime Minister Jose Luis Rodriguez Zapatero arrived in Singapore on Tuesday, joining Queen Sofia, who arrived earlier. Madrid has moved up in the oddsmakers' calculations, and could prove a serious contender despite some sentiment that its bid comes too soon after the 1992 Olympics in Spain's No. 2 city, Barcelona.

London, Paris and Moscow all have held previous Olympics, but not New York — a fact Clinton said was striking.

"We have lived the Olympics," she said, referring to New York's multinational character. "Now I'd like for us to have a chance to host the Olympics."

Clinton, a potential Democratic presidential candidate, and Bloomberg, a Republican, deflected questions at a news conference about possible political ramifications of the senator's role in the bid campaign.

"This is not a political thing, it's a New York thing," said Bloomberg, asserting that it was important to convince IOC delegates that the bid has bipartisan support.

Though New York's main rivals are sending their countries' top government leaders to Singapore, President Bush is not coming. But Bloomberg said the president "couldn't be happier" that Clinton had made the trip.

"Just the logistics of moving a president around in this day and age, with all the security, really takes away from the focus on the Games," Bloomberg told a news conference. "They become the story and the stars instead of what we are here to do."

Bloomberg was asked if his city's devastating experience with terrorism on Sept. 11, 2001, should be cause for concern among the IOC voters.

"Sadly, we live in a world where every city has a security risk," Bloomberg said. "If you look at all five of these wonderful cities — they've all been subject to terrorism and threats."

Clinton also touched on the events of Sept. 11.

"We're standing here a little less than four years from the time when we were attacked and we're telling you that New York City is the place to bring the 2012 Olympics because people of New York are resilient," she said.

As expected, the IOC's executive board approved a recent revision in the stadium plans for New York City's bid.

Last month, in what initially seemed a huge setback for the bid, state officials rejected a proposed showpiece stadium on Manhattan's West Side. The bid campaign quickly devised an alternative plan to use a less costly stadium in the borough of Queens that eventually would replace Shea Stadium as the home of the New York Mets.