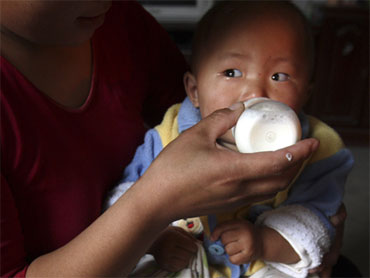 China is investigating parents' claims that a brand of milk powder has caused a small number of babies to grow breasts, the health ministry said Tuesday.

The China Daily newspaper and other state media on Monday said parents of at least three children in the central province of Hubei had made the claims involving formula made by China-based Synutra International Inc.

Health Ministry spokesman Deng Haihua told a news conference Tuesday that authorities are investigating and testing milk powder made by Synutra. "The results will be announced to the public as soon as possible," he said, according to a transcript of the news conference posted on the ministry's website.

In a conference call Tuesday morning in the United States, Synutra's executives said they were fighting the claims.

"We feel strongly that these claims are false and highly irresponsible. They are based on speculation instead of scientific evidence," Joseph Chow, director of board of directors, said at the start of the call, which was meant to discuss the company's first-quarter financial results announced Monday.

Shares of Synutra, which also has an office in Rockville, Md., dropped more than 25 percent Monday on Nasdaq.

Chow told Tuesday's conference call that the company expects some disruptions in sales this quarter.

A food safety expert for the World Health Organization, Dr. Peter Ben Embarek, told The Associated Press that China's test results are expected within days and that the agency will then take a look.

"At first look, it looks very surprising," he said, adding that this is the first time he's ever heard of such a case.

Milk powder became a sensitive topic in China two years ago when more than 300,000 children were sickened and six were killed by infant formula tainted by the industrial chemical melamine.

At the time, a Chinese agency found melamine in formula made by 22 Chinese producers, including Synutra, and Synutra announced it would recall products that may have been contaminated.

That scandal led China to overhaul its food safety measures, but authorities in several cases this year have found the tainted milk again being used in products instead of having been destroyed as ordered.

This week's claims are different. The parents in Hubei claim milk powder caused their babies to grow breasts, state media said. The reports said the babies, from four to 15 months old, were found to have abnormal levels of the hormones estradiol and prolactin, which stimulates lactation, or the making of breast milk.

"At first, I thought it was a tumor. But hospital doctors preliminarily diagnosed it as symptom of sexual prematurity caused by hormones," Deng Xiaoyun, who has a 1-year-old daughter, told the English-language Global Times newspaper Monday.

Ben Embarek said a link to hormones is a possibility, and if hormones are found in the product, the most likely source would be the cows, which may have been given the hormone to help them grow.

It was not yet clear exactly what diet the babies were following.

The information from state media was also contradictory. The state-run Xinhua News Agency on Tuesday cited Yao Hui, deputy head of the endocrine department of Wuhan Children's Hospital in Hubei, as saying three of four babies treated for the condition of premature breasts had never used Synutra baby formula. Yao told Xinhua the fourth baby was switched from Synutra to other brands last year.

Yao could not be reached Tuesday night, and the hospital had no immediate comment.