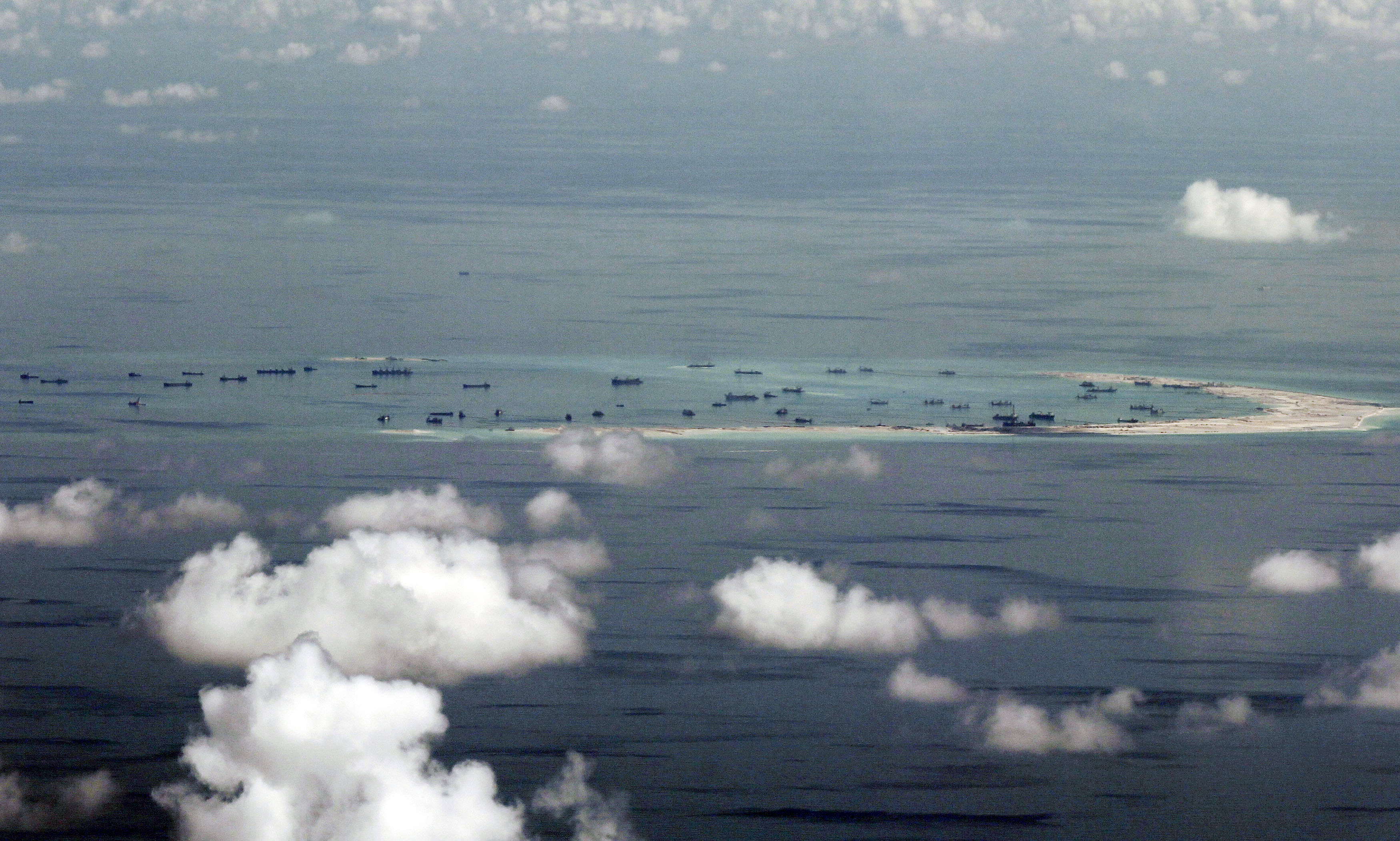 BEIJING -- China appears to have installed anti-aircraft and anti-missile weapons on its man-made islands in the strategically vital South China Sea, a U.S. security think tank says, upping the stakes in what many see as a potential Asian powder keg.

The Center for Strategic and International Studies said in a report late Wednesday that the anti-aircraft guns and close-in weapons systems designed to guard against missile attack have been placed on all seven of China’s newly created islands.

The outposts were built in recent years over objections by the U.S. and rival claimants by piling sand on top of coral reefs, followed by the construction of military grade 10,000-foot airstrips, barracks, lighthouses, radar stations and other infrastructure.

CSIS based its conclusions on satellite images taken in mid-to-late November and published on the website of its Asia Maritime Transparency Initiative.

In a statement, China’s Defense Ministry repeated that development on the islands was mainly for civilian purposes, but added that defensive measures were “appropriate and legal.”

“For example, were someone to be threatening you with armed force outside your front door, would you not get ready even a slingshot?” the ministry statement said.

Foreign Ministry spokesman Geng Shuang told reporters at a daily briefing that he had no information about the reported weaponry, but said such deployments were China’s sovereign right.

The Philippines, which has troops and villagers stationed on some reefs and islands near China’s new artificial islands, expressed concern despite recently improving relations with China.

“If true, it is a big concern for us and the international community who uses the South China Sea lanes for trade,” Defense Secretary Delfin Lorenzana said. “It would mean that the Chinese are militarizing the area, which is not good.”

China’s new island armaments “show that Beijing is serious about defense of its artificial islands in case of an armed contingency in the South China Sea,” CSIS experts wrote in the report.

“Among other things, they would be the last line of defense against cruise missiles launched by the United States or others against these soon-to-be-operational air bases,” the report said.

Beijing says the islands are intended to boost maritime safety in the region while downplaying their military utility. They also mark China’s claim to ownership of practically the entire South China Sea.

Taiwan, Vietnam, the Philippines, Malaysia and Brunei also claim territory in the waterway through which an estimated $5 trillion in global trade passes each year, while the U.S. Navy insists on its right to operate throughout the area, including in waters close to China’s new outposts. China has strongly criticized such missions, known as freedom of navigation operations.

The U.S. has committed to beefing up its military presence in the area, although new uncertainty has been introduced by incoming president Donald Trump, who broke long-established diplomatic protocol by talking on the phone earlier this month with the president of China’s longtime rival Taiwan.

Trump has called for a reconsideration of its commitments to its Asian allies, including Japan and South Korea, while simultaneously criticizing Chinese trade policy toward the U.S. along with its new territorial assertiveness. He also referred to China’s man-made islands in a tweet earlier this month, saying Beijing didn’t ask the U.S. if it was OK to “build a massive military complex in the South China Sea.”

“The timing is significant in that these first clear images come amid Trump’s challenging comments about China and its South China Sea fortresses,” said Alexander Neill, a senior fellow for Asia-Pacific security for the International Institute for Strategic Studies based in Singapore.

Chinese President Xi Jinping said on a visit to the U.S. last year that “China does not intend to pursue militarization” of the area, prompting some foreign experts to accuse China of going back on its word with its new deployments.

Despite that, China considers it vital to equip the islands with defensive means given their distance - 1,000 miles - from the Chinese mainland, together with the nearby presence of forces from rival claimants such as Vietnam, said Yue Gang, a retired colonel and military analyst.

“As the matter of fact, these occupied islands have been armed and fortified for a long time,” Yue said. “No country in the world would only commit to providing civil services without considering its own security safety.”

Looking forward, the nature of China’s new military deployments will likely be calibrated in response to moves taken by the U.S., said the IISS’s Neill.

“China will argue that they are entitled to place whatever they want there in reaction to U.S. actions,” Neill said. “The big question is whether Trump will embark on a more strident or discordant policy in the South China Sea.”