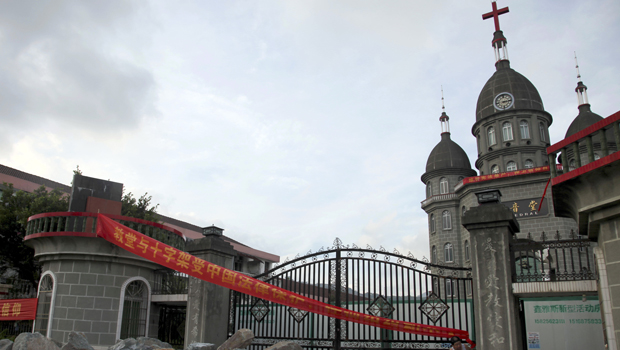 BEIJING -- A Chinese province where authorities have forcibly removed hundreds of rooftop crosses from Protestant and Catholic churches has proposed a ban on any further placement of the religious symbol atop sanctuaries.

The draft, if approved, would give authorities in the eastern province of Zhejiang solid legal grounds to remove rooftop crosses.

Since early 2014, Zhejiang officials have toppled crosses from more than 400 churches, sometimes resulting in violent clashes with congregation members. They have said the crosses violate building codes, but critics say the rapid growth of Christian groups have made the ruling Communist Party nervous.

"The authorities have attached great importance to this religious symbol," said Zheng Leguo, a pastor from the province who now lives in the United States. "This means no more prominent manifestation of Christianity in the public sphere."

A draft of rules on religious structures released by government agencies this week says the crosses should be wholly affixed to a building facade and be no more than one-tenth of the facade's height. The symbol also must fit with the facade and the surroundings, the proposal says. The draft does not provide the rationale for the proposal.

Fang Shenglan, an engineer at Zhejiang Provincial Institute of Architectural Design and Research who was involved with the research for the draft rules, confirmed that rooftop crosses would not be allowed under the proposed rules, but declined to explain why over the phone and did not immediately respond to a written request.

"This new draft law is just another attempt by the government to legitimize its existing illegal violent campaign of destruction and removal of the cross," said Bob Fu of U.S.-based China Aid, which has documented that 448 churches have had crosses removed or buildings destroyed.

"To continue to forcefully remove and ban the cross on the rooftop of the church buildings demonstrates the Chinese regime's determination to contain the rapid growth of Christianity in China," he said in an email.

Christianity has been expanding in China since the 1980s, when Beijing loosened its controls on religion.

Estimates for the number of Christians in China range from the conservative official figure of 23 million to as many as 100 million by independent scholars, raising the possibility that Christians may rival in size the 85 million members of the ruling Communist Party. The religion's tight-knit parishes, proclivity for civil society, and loyalty to God have made the ruling party edgy about its own rule.

Last August, Beijing authorities called Christian pastors and religious scholars into meetings to deliver an edict that the Christian faith must be free of foreign influence but "adapt to China," a euphemism for obeying the Communist Party.

The Zhejiang city of Wenzhou is known as China's Jerusalem because it has half of the province's 4,000 churches. Rooftop crosses used to dominate the city's skylines, and local churches - often funded by well-off businesspeople - raced to build the largest church and the tallest cross as an ostensible display of their blessings.

In April 2014, authorities forcibly demolished the Sanjiang Church, a highly visible structure then under construction on a hill just off a major highway in Wenzhou.

Most recently, a Wenzhou court sentenced Christian pastor Huang Yizi to one year in prison after he publicly questioned the removal of rooftop crosses.

Compared to the Communist Party's previous militant-style campaigns aiming at wiping out the religion, the latest crackdown is milder and its primary target is a symbol rather than the belief itself, Zheng said.

Still, he called it "a restriction on the public space for Christianity."

The campaign comes amid Beijing's increasing restrictions on civil liberty, Zheng said, as authorities have stepped up persecution of advocates for civil society and rights lawyers, and placed more restrictions on non-governmental groups.

Although the crackdown on rooftop crosses has been limited to one province, Beijing has acquiesced to it, Zheng said.