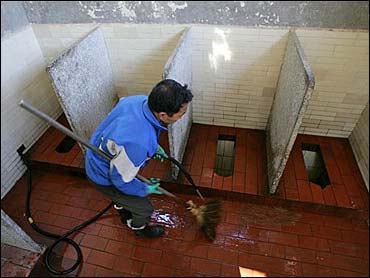 That's certainly true of China when it comes to the 2008 Summer Olympics.

Government officials conscious of both the hazards of August heat - which can top 100 degrees - and the opportunity to show off Beijing to tourists and business leaders are hard at work now getting the city ready.

Residents of the capital may wind up benefiting as well, as the first two targets of the scrub-up campaign are air pollution and the condition of the city's public toilets - many of which are little more than open trenches.

Both clean-ups are dramatic in scale.

To reduce smog, over 130 factories branded as major polluters will be moved out of Beijing by 2005. Others will be allowed to stay on, but must cut production and/or switch from coal and other traditional fuels to cleaner natural gas.

Beijing, a city of 13 million people, has recorded just 187 smog-free days so far this year, 40 short of the official target for 2004, according to the Beijing Morning Post.

Almost as big in impact is Beijing's determination to launch its public toilets into the modern age.

Beginning Nov. 17, the city will host the 2004 World Toilet Summit,
showcasing efforts to transform the capital's lavatories from foul to fragrant.

"Toilets represent the level of development of a country, a region," says Yu Debin, deputy director of Beijing's Municipal Bureau of Tourism. "They also represent a region's spiritual and material civilization."

The three-day summit is expected to attract 150 academics, sanitation experts, toilet designers and environmentalists from 19 countries as far-flung as the United States, Finland, Germany, Japan and Nepal.

Public urination by adults and children clad in "split crotch pants" are still a common sight in crowded Beijing, where foreign tourists have long been shocked by foul-smelling facilities lacking soap, toilet paper and other basics.

China says the government has spent about $29 million over the past three years building or renovating 747 restrooms at tourist spots.

"The new toilets will have very practical designs and will meet the needs of the people," said Liang Guangsheng, deputy chairman of the Beijing Municipal Administration Commission.

"We aim to build clean, civilized, energy-saving, convenient and environmentally-friendly toilets," Liang said. "We also will consider the needs of the old, the young, the weak, the sick and the handicapped."

The city has come up with a rating system of one to four stars for its public facilities.

City spokesmen contacted Friday couldn't give any details of what qualifies a toilet for the top rating but state media has said that the criteria include granite rock floors, remote-sensor flushes, automatic hand-driers, a rest area and piped-in music.

According to the Chinese government, Beijing now has 88 four-star toilets, 161 that qualify for three stars, 312 for two and 110 for one.

The World Toilet Summit, overseen by the Singapore-based World Toilet Organization, is in its fourth year. Previous hosts include Singapore, Seoul and Taipei.

The last day of the summit falls on Nov. 19, World Toilet Day, when organizers say they hope to focus worldwide attention on promoting toilet etiquette.