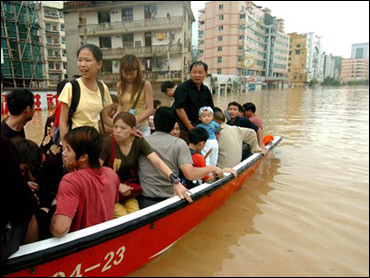 Flooding and landslides in areas throughout China have killed 536 people over the past two weeks, forcing the evacuation of 1.4 million and making this one of the deadliest summer rainy seasons in a decade, the government said Friday.

Damage was worst in southern China, where rains and mudslides have killed at least 97 people this week and left another 41 missing, the official Xinhua News Agency reported.

The death toll was higher than most of the rainy seasons of the past decade, though still below that of 1998, when 4,150 people were killed in summer flooding in central and northeastern China, Xinhua said.

Nationwide, a total of 137 people were missing, while economic losses were estimated at 20.4 billion yuan (US$2.5 billion), the report said. About 1.5 million people have been evacuated from a six-province swath.

Especially hard-hit was Guangdong province, which borders Hong Kong. It is China's most populous region, with more than 100 million people and thousands of factories that feed export industries, news reports said.

Roads and railways in Guangdong were cut by rising floodwaters, including the main Beijing-Hong Kong rail line, Xinhua said.

So far, most damage in Guangdong appears to be to farms, with export-oriented factories largely unaffected, said Ruby Zhu, China economist for the Hong Kong General Chamber of Commerce.

"But if it gets more serious, we're not sure what will happen in Guangdong province," she said.

A front-page photo in the Guangzhou Daily newspaper, published in Guangdong's provincial capital, showed floodwaters so high in one town they nearly reached the top of telephone poles.

"There will be a lot of suffering, particularly for the rural people in neighboring counties," Henley said.

China suffers hundreds of flooding deaths every summer in its south and northeast.

The impact of seasonal rains is magnified by environmental damage from decades of intensive farming and tree-cutting that have left denuded hillsides unable to trap rain. Millions of people live in vulnerable areas on reclaimed former flood plains.

State television Friday showed people clinging to rubber hoses to avoid being swept away, as well as soldiers placing babies in straw baskets to be lowered with ropes and pulleys into wooden rowboats.

Soldiers and civilians formed brigades to fill and carry sandbags to shore up faltering dams and riverbanks, in a country where most labor is still done by hand.

In Guangxi, some 42,000 people were evacuated from low-lying areas of the industrial city of Wuzhou in case a surging river that flows through the city overwhelmed protective dikes, the government said. High school entrance exams in Wuzhou were suspended.

About 760,000 people were evacuated from flood-prone areas in Guangxi, and 120,000 in Guangdong, state television said on its midday news. It didn't give update figures for evacuations elsewhere, but earlier reports said 320,000 people were relocated in Fujian.