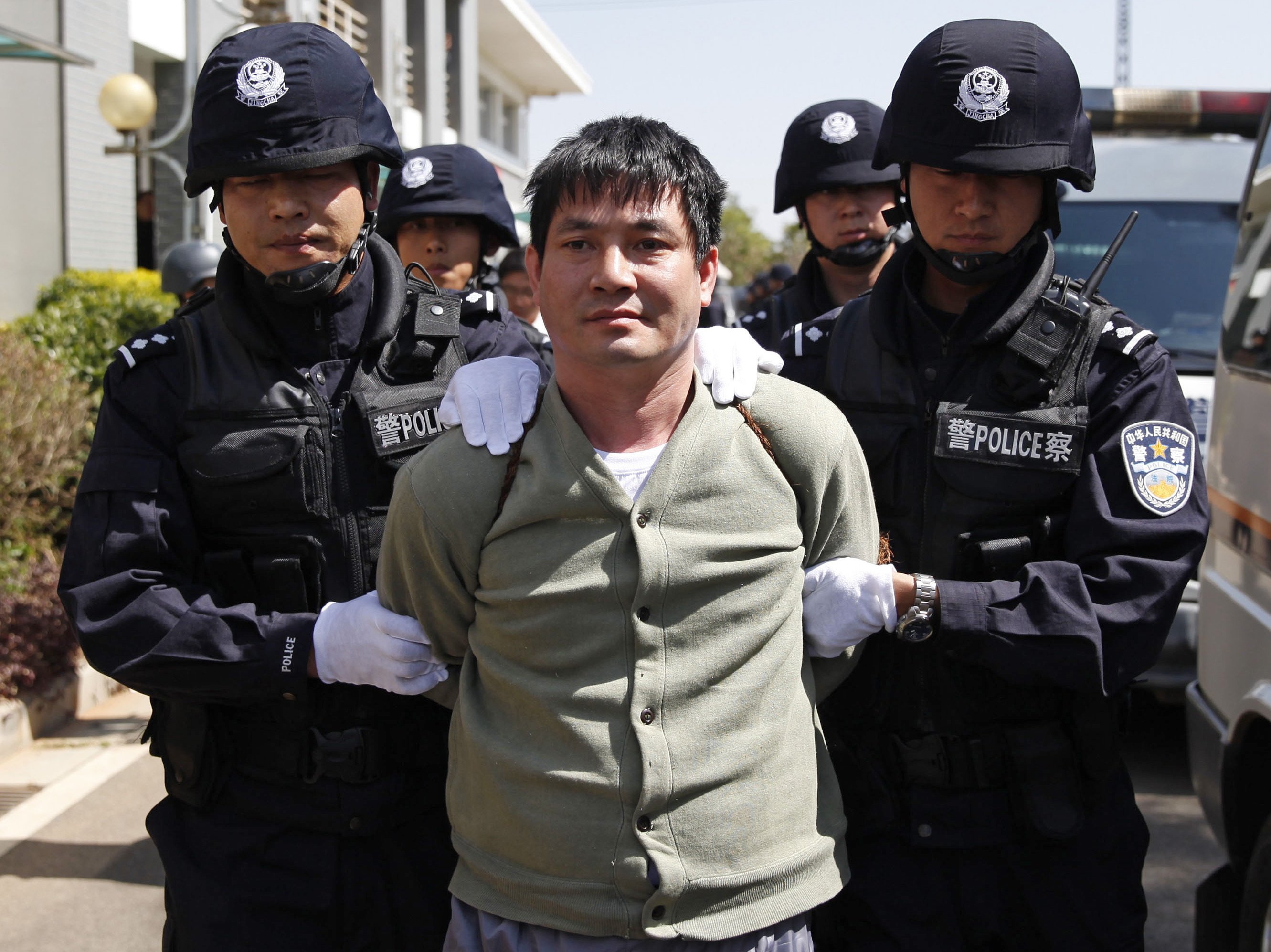 BEIJING China executed four foreigners on Friday for killing 13 Chinese sailors in an attack on the Mekong River, following a live nationwide broadcast showing them being led to their deaths that harkened back to the mass public execution rallies of past years.

The attack on the sailors on the Mekong highlighted drug smuggling and extortion rackets along the vital waterway and led to a major expansion of Chinese police powers in the region.

Accused ringleader Naw Kham and accomplices Hsang Kham, Yi Lai, and Zha Xiha were found guilty of the killings. The four are of Myanmar, Thai, Laotian, and unknown nationality.

In the unusual live broadcast, state-run CCTV showed the four being led in shackles and handcuffs from their cells at a jail in southwestern Yunnan province's capital of Kunming prior to their execution by lethal injection. Their deaths were announced two hours later by the Yunnan provincial police department.

China has mostly abandoned the once-common practice of parading condemned criminals before crowds in stadiums and through city streets on the way to execution grounds on the edge of cities.

The broadcast was a response to widespread Chinese outrage over the killings, as well as an attempt to emphasize the heinousness of the crime and the efficiency of China's police and courts in doling out justice, said Prof. Yu Guoming of Renmin University's School of Mass Media.

"The brutality of Naw Kham in the killing really got ordinary Chinese people riled up. It's no wonder that it has attracted such huge attention from the public," Yu said.

The gang was accused of ambushing two flat-bottomed Chinese cargo ships on the upper reaches of the Mekong River on Oct. 5, 2011, in Myanmar waters infested with gangs that make their living from protection rackets and the production and smuggling of heroin, methamphetamine and other drugs. The Mekong flows south from Yunnan through the infamous "Golden Triangle" region, where the borders of Myanmar, Laos and Thailand meet, and provides a vital trade and transportation route between southwestern China and Southeast Asia.

The ships were recovered downriver later that day by Thai police following a gun battle with gang members, and the bodies of the 13 victims, some bound by the hands before being stabbed and shot, were fished from the river over the following days. Methamphetamine was found on the boats, leading to speculation they had been hijacked as part of a drug smuggling plot.

However, gang members later testified the killings were in retaliation for the ships refusing to pay protection money and allowing themselves to be used by Thai and Laotian soldiers in attacks on warlord bases. They said the drugs were placed on board to make it look like there had been a struggle between smugglers.

China's Public Security Ministry made the case a top priority, forming a 200-officer special investigation group and working with Thai, Lao, and Myanmar authorities to gather evidence and track down the perpetrators. Naw Kham was arrested in Laos last April and turned over to China the following month along with the other defendants. Because the killings took place on board Chinese-flagged vessels, Beijing, whose massive economy and powerful military give it considerable sway over its smaller southern neighbors, ruled the trials should take place in China.

"Some analysts had even said the hunt for Naw Kham could be as difficult as the hunt for bin Laden," the Global Times reported this week

The four were sentenced to death in November in a two-day trial, and the judgment was upheld by China's Supreme People's Court in Beijing following an automatic appeal in accordance with Chinese law.

In their testimony, the four said they had conspired with renegade Thai soldiers, nine of whom were arrested in October 2011 in Thailand and charged with taking part in the killings. They have yet to be tried or extradited, and remain in Thai army custody.

Months after the killings, China established a multinational river patrol headquartered in Yunnan which Beijing says has been effective in clamping down on such incidents.

"The case set a precedent that China would vigorously pursue criminals who commit crimes against its nationals. That's led to an expansion of Chinese police powers into the neighboring region and a big boost in Chinese influence," said Jin Canrong, associate dean of Renmin University's School of International Studies in Beijing.

China has devoted increasing attention to the safety of its nationals abroad as the Chinese economy continues to expand overseas. In recent years, Beijing has used navy ships and air force planes to help evacuate Chinese workers from fighting in Libya, and its diplomats have worked to free kidnapped workers and resolve local disputes across Africa and parts of Asia.

According to the Guardian, human rights groups say China executes about 8,000 people per year but China does not disclose the exact number.