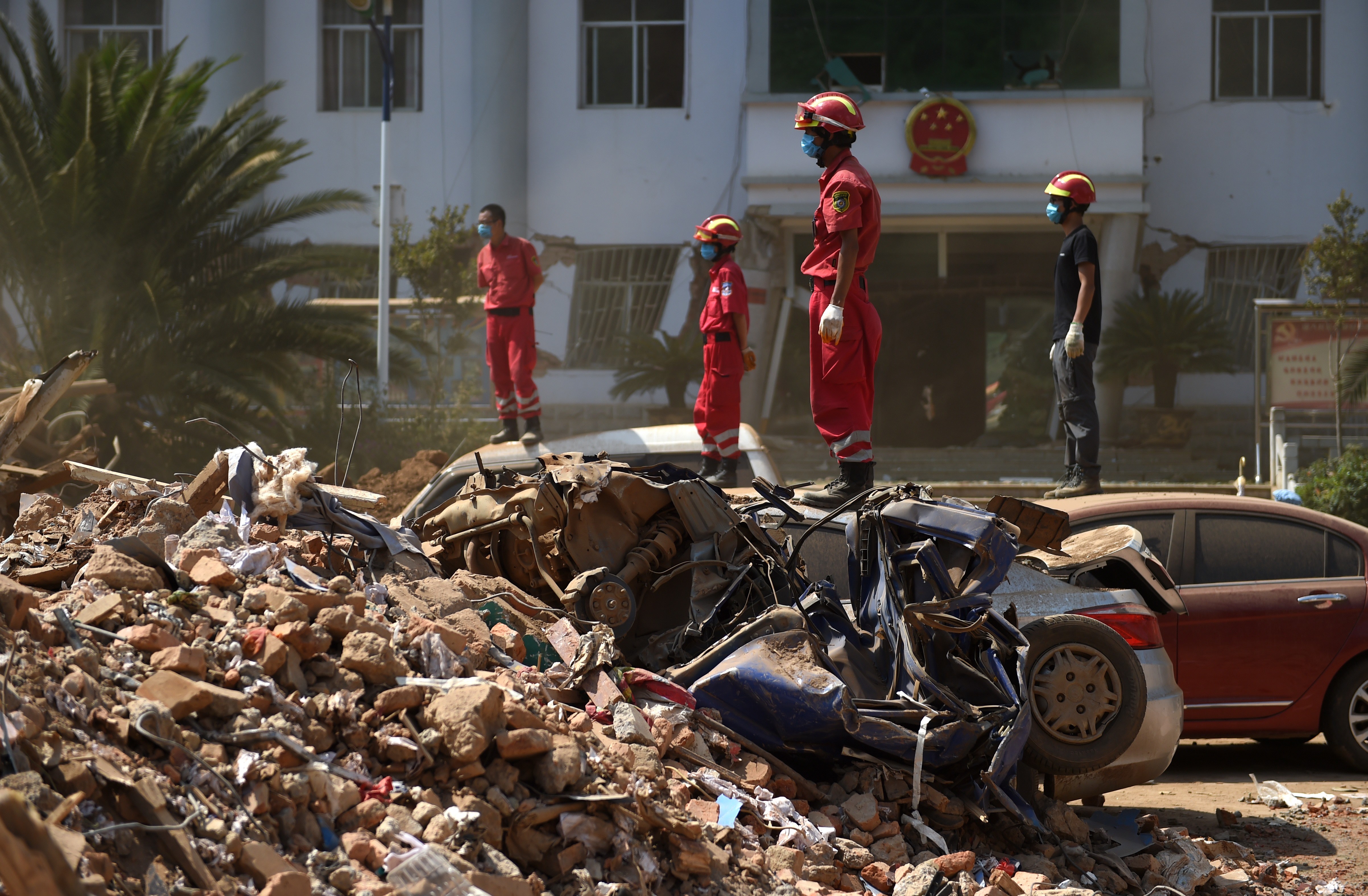 LUDIAN, China -- The death toll in southern China's earthquake jumped from 410 to 589 on Wednesday as search and rescue teams found scores more bodies while pushing into isolated mountain communities to clear debris from collapsed homes.

The Yunnan provincial government said more than 2,400 people were injured in Sunday's 6.1 magnitude quake in the mountainous farming region of Ludian county - the country's deadliest temblor in four years and its biggest test of emergency response under leader Xi Jinping.

At a makeshift headquarters in the forecourt of a cracked middle school in the worst-hit town of Longtoushan, a senior colonel in the People's Liberation Army said there might still be hope to find survivors.

"There are a lot of people that we may never be able to dig out," said Senior Col. Feng, who declined to give his full name because he was not an officially designated spokesman. "But there is still hope."

Wednesday's jump in the toll - from 410 late Tuesday - was due to rescuers arriving in places where they had previously been unable to contact anybody, in small farming villages built into the mountains above the main towns, said Feng, who is based in neighboring Sichuan province. There were reports of additional communities buried but still unreached by rescuers.

Some 10,000 troops and hundreds of volunteers have rushed to Ludian to clear roads and dig out survivors from the debris, but landslides and bouts of heavy rains have complicated the efforts.

The quake struck an area of steep hills and narrow roads that are not well suited to all the traffic of the massive relief effort. Landslides have shorn shear rocky faces into the region's valleys and piled earth on roads.

The weather was clear Wednesday and the roads into Longtoushan were clogged with rescue vehicles, ambulances and military jeeps along with residents and volunteers on foot.

Wang Zhixue, 32, a farmer from Wangjaocun village near Longtoushan, said his wife and two daughters survived the quake but that a landslide wrecked their house. They're now saying in a tent on a hillside.

"We're getting some help, but the roads must be cleared before we can recover," Wang said. "It took four hours to get supplies on my motorcycle so getting transportation going is the most important thing. "

China's state-run media have focused heavily on the relatively glitch- and scandal-free response to the Yunnan earthquake. The government under Xi, who took over as Communist Party leader in November 2012 and president in early 2013, has been able to mobilize troops faster than its predecessor, said Willy Lam, a Hong Kong-based political analyst.

"Obviously, the military - in terms of personnel, emergency relief operation, and PLA heavy equipment - got there very early," Lam said. "In that perspective, the command and control seemed to be more efficient under Xi Jinping, and his authority was beyond doubt."

However, some members of the public also have criticized the state media coverage, which has been heavy on the heroics of the rescue efforts but thin on retrospection over possibly shoddy construction of houses in the region.

A series of photos intended to applaud the sacrifice of soldiers drew questions on social media about their preparedness and training when they were shown using muddy water to boil noodles despite the quake zone being awash in bottled water.

The six-hour rescue Tuesday of 88-year-old Xiong Zhengfen featured prominently on the main state-run TV broadcaster CCTV, showing workers in orange jumpsuits using an electric rotary saw to cut through two layers of concrete to reach her in a collapsed building in the village of Babocun.

Other rescuers then put a bandage around her head to protect her eyes from daylight after 50 hours she spent trapped in darkness. "Don't open your eyes," they shouted while hoisting her out of the concrete with the help of a rope. They then called for a stretcher.