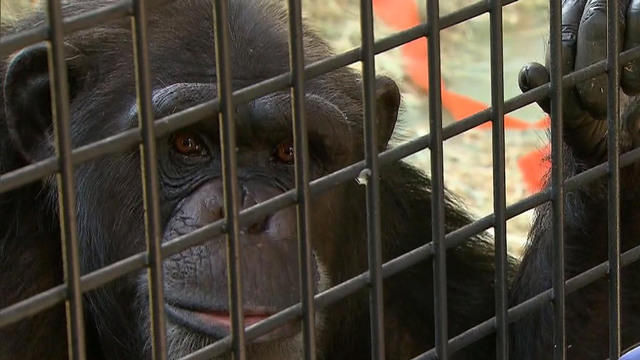 Nine chimpanzees once used as research animals now have a new lease on life. The group was moved to a new refuge in northern Georgia, hundreds of miles from their former home in a lab.

Buttercup and the other eight chimps were all born in a lab and used as subjects in biomedical testing. According to animal activists, they were subjected to cruel and inhumane experiments. But last year, all chimps were designated an endangered species, putting a stop to all testing and giving them the retirement they deserve.

One cage at a time, workers with the nonprofit group “Project Chimps” unloaded all nine animals. For the last decade or so, each of them was prodded and poked and used in experiments.

The “Project Chimps” sanctuary in Morganton, Georgia is their new home.

“This is their chance to be who they really are,” said Jessica Hartel, a primatologist and the director of “Project Chimp.”

“Sixteen hours with nine chimps sounds like the road trip from hell. How was it?” Strassman asked.

“Well, considering we didn’t sleep, it wasn’t super easy,” Hartel said. “But we were all so excited for them. Our adrenaline is on high. They’re living their life for the first time really.”

Chimps are considered the smartest primate, the closest relatives to humans -- which is why the New Iberia Research Center in Louisiana has used 220 of them for medical testing. But in 2009, undercover video shot by the Humane Society showed terrified animals yanked from cages and strapped down for experiments.

No more. On Wednesday night, the first truckload of chimps left Louisiana bound for Georgia to a sprawling, walled 236-acre preserve where all the chimps eventually will roam free.

“This marks the end of privately funded research on chimpanzees in the U.S. That’s a huge deal,” said Sarah Baeckler, who leads Project Chimps. “That’s the end of an era for these guys.”

“Are you worried about PTSD?” Strassman asked.

“There are studies that show chimps coming out of research show the signs of PTSD. And so we will look for those signs,’ Baeckler said.

The nine new arrivals will be quarantined and observed for the next month before Project Chimps sets them loose. Hartel said their release is long overdue.

“There’s a personality there. They’re individuals,” Hartel said. “They’ve been used as a tool and we should be ashamed of ourselves for letting this happen to beings, real beings.”

All of the chips are between 10 and 13 years old, and have never touched grass or swung from a tree. Chimps can live to be 60, so when these girls are freed, they’ll spend a good long retirement out of cages and in a habitat that feels much more like a home.