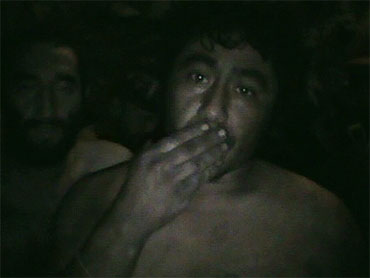 A new video of 33 men trapped in a mine under Chile's Atacama Desert shows them sending greetings to their families, talking about how they are doing better since receiving food and breaking into tears as they talk about loved ones.

In the video released Sunday, the men are shirtless because of the heat in the mine and wearing what look like white surgical pants, special clothing sent down to help keep them dry.

Most are upbeat, expressing gratitude to their families and the rescuers for the support they are receiving via handwritten notes sent to them through three small bore holes. Authorities also send food, water, medicine and other goods to them through the three holes.

But when it comes time to speak about their wives and children, many of the men break down.

"I'm sending my greetings to Angelica. I love you so much, darling," says 30-year-old Osman Araya, as his voice chokes and he begins to cry. "Tell my mother, I love you guys so much. I'll never leave you, I will fight to the end to be with you."

Araya and 32 fellow miners were trapped by the Aug. 5 collapse of the main shaft of the San Jose gold and silver mine in northern Chile. They only gained contact with the outside after 17 days - during which they rationed 48-hours' worth of food and dug for water in the ground. On Monday, the men will equal a mark set by three miners who survived 25 days trapped in a flooded mine in southern China last year. Few other rescues have taken more than two weeks.

In the video, one miner explains to the family of 28-year-old Ariel Ticona that he didn't want to appear on camera - apparently because he is shy - but that he was sending his love to them and that, according to an unidentified speaker, he "is super happy and he is super, super, super well!"

The latest video, in contrast to the first 45-minute video released by the government on Thursday, shows little of the men's surroundings. Instead, it appears meant as a video postcard for loved ones, as each of the 12 men who speak to the camera are given about 30 seconds to talk.

At one point, the camera pans to a larger group of men, and several animated, joking voices can be heard throughout the tape.

One unidentified man, who squints in the light shone on his face as do most of the miners, said he is thankful "for all your efforts out there."

Another man shown says he is doing much better because of the food and water the miners have received.

The miners will have to aid in their own escape by clearing thousands of tons of rock that will fall as a rescue hole is drilled toward them.

"The miners are going to have to take out all that material as it falls," Andres Sougarret, Codelco's head engineer on the operation, told The Associated Press Sunday in a phone interview.

After drilling three small bore holes in recent weeks to create lines of communication with the miners and deliver basic food and medicine, Chile's state-owned Codelco mining company will begin boring a rescue hole Monday afternoon that will be wide enough to pull the men up through 2,300 feet of earth.

The first step will be to drill a "pilot hole" similar in size to the other three. Then much larger machine cutters will slowly grind through that hole, forcing crushed rock to fall down into the mine shaft area near the trapped men.

Failure to keep the bottom clear of debris could quickly plug the hole, delaying a rescue that officials say could take three to four months.

In all, the trapped miners will have to clear between 3,000 and 4,000 tons of rock, work that will require crews of about a half-dozen men working in shifts 24 hours a day.

The men have basic clearing equipment, such as wheel barrows and industrial-sized battery-powered sweepers, Sougarret said. The hole will likely end up several hundred yards from their living area in the mine's shelter, giving the men room to maneuver and store the rocks, he added.

Sougarret declined to estimate how long the work would take, saying it would depend on how each step went.

Once drilling begins, the team will have to decide whether to fit the wider hole with metal casing, often used to seal a hole and prevent collapses in the walls.

"We may not have to use it in this case because the rock is really high quality, really strong," he said.

Engineers are now also reportedly discussing a "Plan B" to reach the miners faster that could possibly include boring a second rescue shaft, reports CBS News correspondent Seth Doane.

But publicly, government officials say the rescue is still three to four months away.

On Sunday, Mining Minister Laurence Golborne said that experts had analyzed 10 different methods to get the men out, will continue to study other options, but that "nothing has yet been found that will be quicker."

Normally, after completing a pilot hole, the opening is enlarged by drilling from the bottom up. The drill, hanging at the bottom of the pilot hole, is reached through existing shafts in a mine and then fitted with the machine cutters, which then blast through rock as they are raised.

In this case, however, there is no way to get those large cutters to the bottom of the mine; if there was a hole large enough to reach it, the men would already have been rescued.

Araya said that knowledge gained drilling the initial holes, which are between 20 and 100 yards from the shelter, would give the team digging the rescue hole a head start. For example, while penetrating rock, the circular motion of the bits causes the drill to veer right. In this case, the especially hard rock exaggerates that, making constant correction necessary, he said.

From the moment the mine collapsed, the trapped men have had a central role in keeping themselves alive - getting to the safety chamber, rationing food and keeping order with extraordinary discipline.

Still, many questions remain. What physical and mental condition will the men be in when they are called on to help save themselves?

"We will keep them alive, in good shape and health," said Golborne. "That is something that is happening in parallel while we are digging the larger hole."

Other steps are being taken to keep the men as strong as possible - physically and mentally.

Telephone wire was being snaked down one of the bore holes on Sunday, and Golborne said that within a few hours one representative from each family would be allowed to talk to one of the miners - the first verbal communication they would have. Until now, handwritten notes have been passed through tubes sent up and down the bore holes.

Physically, many of the men have severe skin irritations from the hot, wet conditions underground and were sent special clothing that dries quicker and also small mats to sleep on so they don't have to rest directly on the damp ground.

For now, the men have some time to prepare before they start the arduous task of hauling away the rock that stands between them and freedom, but questions remain.

Sougarret, the operation leader, said it will be one to two months before large quantities of rocks start falling. Can the men do such hard labor for a couple months just on food that will fit down the narrow tubes? And then there is what will be a harrowing rescue: each man will be pulled up through the 26-inch hole in a tube, a ride that will take about an hour each.