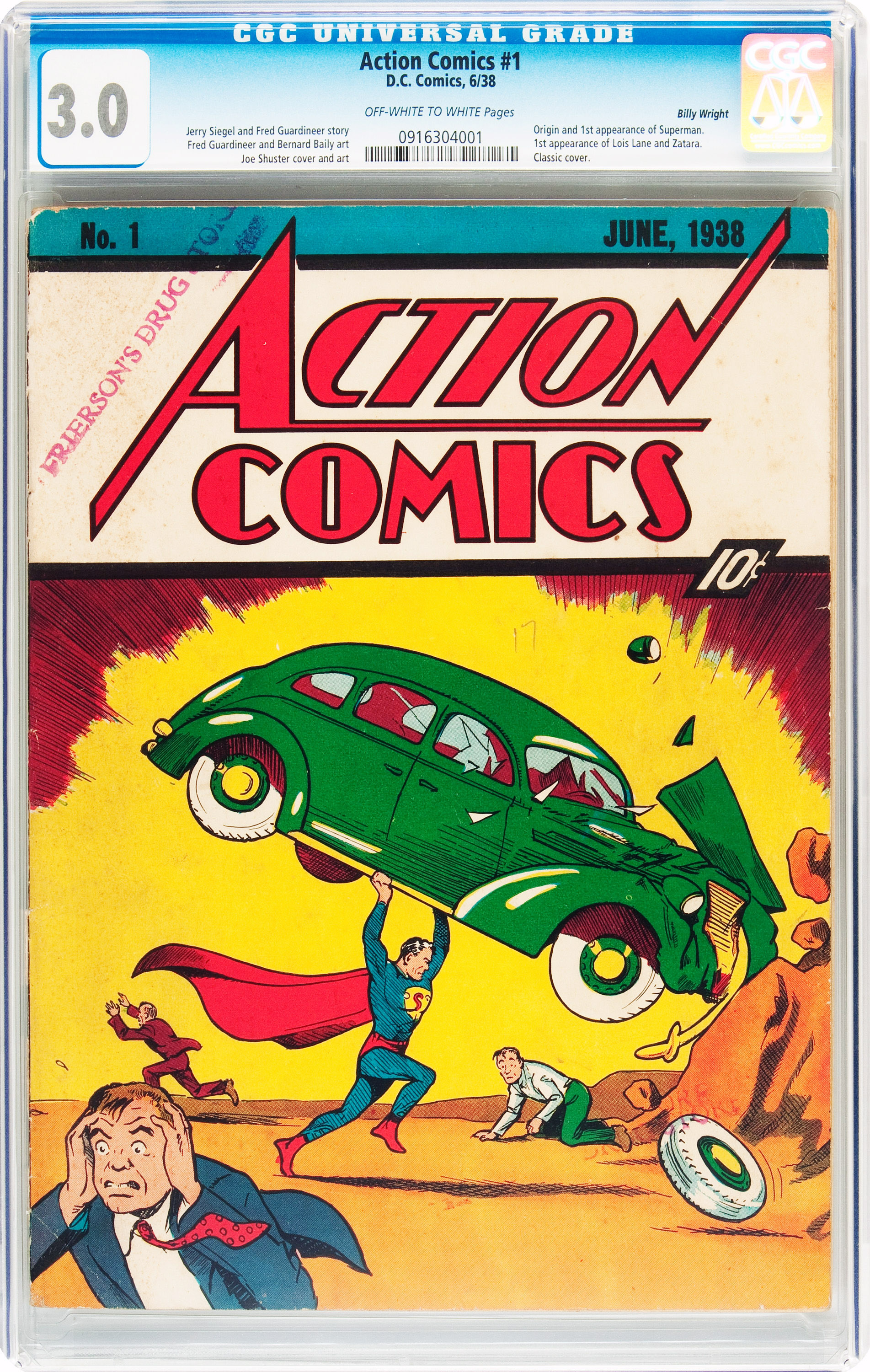 DALLAS - The bulk of a man's childhood comic book collection that included many of the most prized issues ever published sold at auction Wednesday for about $3.5 million.

A copy of Detective Comics No. 27, which sold for 10 cents in 1939 and features the debut of Batman, got the top bid at the New York City auction Wednesday. It sold for about $523,000, including a buyer's premium, said Lon Allen, managing director of comics for Heritage Auctions, the Dallas-based auction house overseeing the sale.

"This really has its place in the history of great comic book collections," said Allen, who added that the auction was high energy, with "a bunch of applause at a couple of the top lots."

Among the 345 well-preserved comics bought decades ago by the Virginia boy with a remarkable knack for picking winners were 44 of The Overstreet Comic Book Price Guide's top 100 issues from comics' golden age.

"It was amazing seeing what they went for," said Michael Rorrer, who discovered his late great uncle Billy Wright's collection last year while cleaning out his late great aunt's house in Martinsville, Va., following her death.

Opening up a basement closet, Rorrer found the neatly stacked comics that had belonged to Wright, who died in 1994 at age 66.

"This is just one of those collections that all the guys in the business think don't exist anymore," Allen said.

Experts say the collection is remarkable not only for the number of rare books, but also because the comics were kept in such good condition for half a century by the man who bought them in his childhood.

"The scope of this collection is, from a historian's perspective, dizzying," said J.C. Vaughn, associate publisher of Overstreet.

Most comics from the golden age - the late 1930s into the 1950s - fell victim to wartime paper drives, normal wear and tear and mothers throwing them out, said Vaughn. Of the 200,000 copies of Action Comics No. 1 produced, about 130,000 were sold and the about 70,000 that didn't sell were pulped. Today, experts believe only about 100 copies are left in the world, he said.

Allen said that 80 of the lesser-valued comics from the collection will be sold in an online auction Friday that's expected to bring in about $100,000.

Rorrer, of Oxnard, Calif., got half his great uncle's collection and his mother took the other half to give to his brother Jonathan in Houston. Rorrer, 31, said he didn't realize their value until months later, when he mentioned the collection to a co-worker who mused that it would be quite something if he had Action Comics No. 1.

"I went home and was looking through some of them, and there it was," said Rorrer, who then began researching the collection's value in earnest.

Once Rorrer realized how important the comics were, he called his mother, Lisa Hernandez, of League City, Texas, who still had the box for his brother at her house. The two then went through their boxes, checking comic after comic off the list.

Hernandez said it really hit her how valuable the comics were when she saw the look on Allen's face when the auction house expert came to her house to look through the comics.

"It was kind of hard to wrap my head around it," Allen said.

The find was a complete surprise for the family, and it is unclear if Ruby Wright was aware of the collection's significance. Rorrer said he remembers her making only one fleeting reference to comics: Upon learning he and his brother liked comic books, she said she had some she would one day give them. He said his great uncle never mentioned his collection.

Allen, who called the collection "jaw-dropping," noted that Wright "seemed to have a knack" for picking up the ones that would be the most valuable. The core of his collection is from 1938 to 1941.

Hernandez said it makes sense that her uncle — even as a boy — had a discerning eye. The man who went to The College of William and Mary before having a long career as a chemical engineer for DuPont was smart, she said. And, she added, Wright was an only child whose mother kept most everything he had. She said that they found games from the 1930s that were still in their original boxes.

"There were some really hard to find books that were in really, really great condition," said Paul Litch, the primary grader at Certified Guaranty Company, an independent certification service for comic books.

"You can see it was a real collection," Litch said. "Someone really cared about these and kept them in good shape."