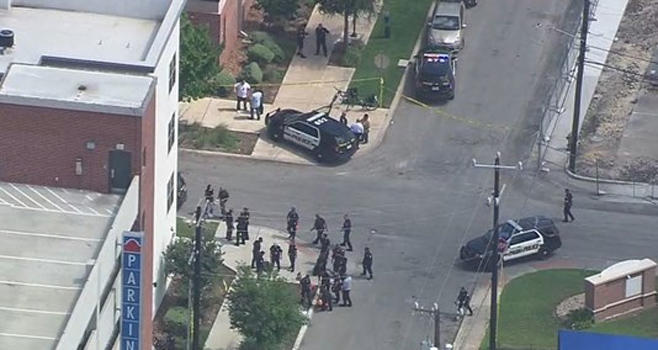 SAN ANTONIO, Texas -- Two San Antonio police officers were wounded in a shootout with a suspect on a street just north of the city's downtown section.  One of the officers was left in "grave, grave condition" and is "not expected to survive," CBS affiliate KENS-TV reports.

One of two suspects also wounded in the Thursday afternoon shootout and later died. The other suspect was taken into custody.

Police Chief William McManus KENS-TV the incident started during a "pedestrian contact." He said the two officers were patrolling the neighborhood when they spotted two people with whom they wanted to speak. McManus says the officers were immediately fired upon when they stepped from their car. The officers returned fire, striking a suspect.

McManus said the officers were taken to San Antonio Military Medical Center. One was wounded in the head and the other in the upper torso and was expected to recover but remains in critical condition.

Identities of the officers -- who are nine-year department veterans -- wasn't immediately released.

The incident prompted a lockdown at San Antonio College, according to its Twitter feed, but the college was later given the all clear.