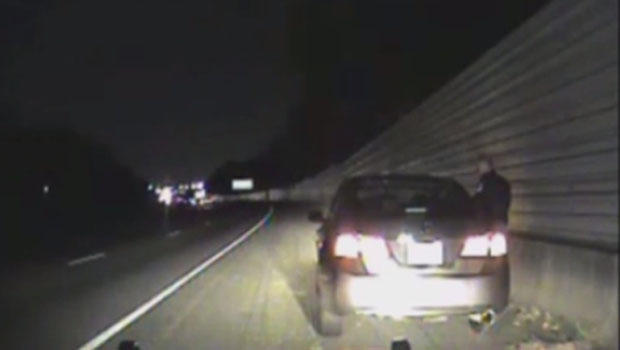 COBB COUNTY, Ga. -- A Georgia police chief said he is recommending the firing of a lieutenant who was heard on video during a traffic stop saying, "we only kill black people."

Dashcam video from July 2016 shows a woman in a car telling Cobb County police Lt. Greg Abbott she was scared to move her hands in order to get her cellphone. According to television station WSB-TV, Abbott, who is also white, interrupts her and says, "But you're not black. Remember, we only shoot black people. Yeah. We only kill black people, right?"

Register said the comments were inappropriate regardless of the context in which they were uttered.

"In no context can I tolerate this type of language," Register said during a Monday press conference. "I don't think we can sit here and justify any type of language when the verbiage is what we heard on that video."

Register, who has led the department since June, said the comments are "not indicative of the culture I'm trying to instill here."

Register said he learned of the comments from television station WSB on Friday, which obtained the video through an open records request. Abbott had been placed on administrative duty pending the outcome of the investigation.

Abbott's attorney did not immediately respond to an email seeking comment on the termination. He earlier said Abbott is cooperating with the investigation, and that his comments were meant to "de-escalate a situation involving an uncooperative passenger."

Register said he's known Abbott for years and said he's perceived him to be an honorable man. He said Abbott "made a mistake."

"I don't know what's in his heart, but I certainly know what came out of his mouth," Register said. "It's inexcusable, and we have to take appropriate action."