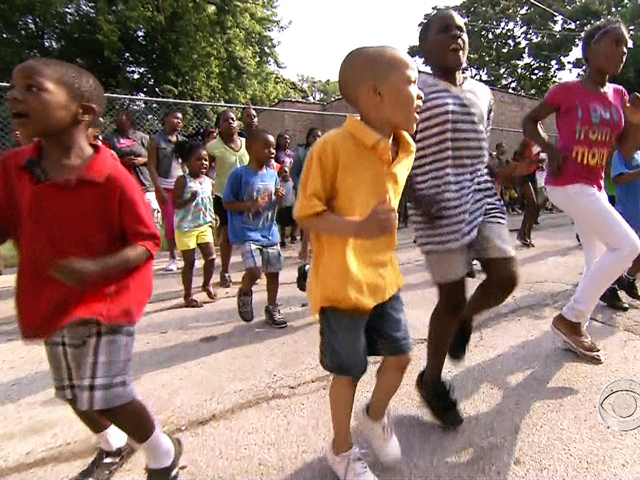 (CBS News) CHICAGO -- Every weekday, when a rattletrap van heads deep into a violent, crime-ridden Chicago neighborhood, Yolanda Morris is at the wheel.

"Last summer there were shootings on this street," Morris told us. "We had to have our children actually lay on this sidewalk and just lay down until the shooting was over and then get them into the building."

She's talking about the children she drives to summer camp at the New Mount Calvary Baptist Church. About 140 kids -- from toddlers to teenagers -- can find a six-hour haven here during what are historically Chicago's bloodiest months.

"All they need is a chance in order to do something, to get out of this neighborhood, if they wish to do so," Morris said.

There are arts and crafts here to go with calisthenics; reading, as well as arithmetic.

How did Chicago cut gun violence after deadly year?
Chicago school closings have parents worried about safety
Watch: The War in Chicago

"Sometimes in the morning, they'll actually play a game as we're driving, counting the number of abandoned houses," Morris said. "I mean, that's not something that you see, I believe, in most neighborhoods."

What kind of neighborhood it is was apparent when we retraced her route one day last week.

Summer camp may mean gorgeous vistas and wide-open spaces to other kids, but here it's a black top playground outside a church hall. A city park a block away is too dangerous to visit.

Asked if she ever goes home at night and cries, Morris replied, "Sometimes I cry here. Sometimes I do, yeah."

Morris, a retired bank executive who runs the camp, drives in every day from her home in the suburbs.

"The children there don't need what the children in this neighborhood need," she said. "And so that's why I do it. I love the children."

Shootings in the Englewood neighborhood are down this year, as they are in the rest of the city.

"This year has been much better, and we're just keeping our fingers crossed that it will remain kind of calm over here on this street," Morris said.

After all, there's a lot riding on it.