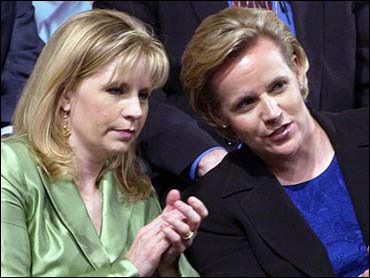 Mary Cheney typically works quietly behind the scenes on her father's vice presidential campaign, but she was dragged front-and-center after John Kerry noted that she is a lesbian during his debate with President Bush.

Her parents were furious at Kerry. But others who have publicly navigated the waters of politics and homosexuality say Vice President Dick Cheney and his wife may have overreacted to what Kerry called an attempt to compliment them on how they have dealt with having a lesbian daughter.

The Cheneys went on the attack immediately after the debate, where Kerry had suggested their daughter's sexual identity was formed at birth.

A campaign spokeswoman said Mary Cheney, who runs operations in the vice president's campaign office, declined to comment — as is typically the case.

But others said Kerry's comments seemed well within bounds, especially because Mary Cheney has been public about her sexuality and because her father has discussed it openly before.

"It's trying to put a human face and make clear the issue of one's sexual orientation does not honor partisan lines," said Gunderson, who used to represent Wisconsin.

The flap was ignited during the presidential debate Wednesday night, when Kerry was asked whether homosexuality is a choice.

Kerry said in a statement Thursday that he "was trying to say something positive about the way strong families deal with the issue."

Running mate John Edwards noted that Cheney has raised his daughter's sexuality on his own, while Edwards' wife, Elizabeth, wondered whether Mrs. Cheney was ashamed of her daughter.

That prompted a sharp response from Mary Cheney's sister, Liz, who also works on the campaign.

"It has nothing do with shame. And I think Mrs. Edwards was also out of line. Mary is one of my heroes. And it has nothing to do with being ashamed of Mary," Liz Cheney told CNN's Paula Zahn.

Rep. Dick Gephardt defended Kerry on a subject he knows well. His daughter is a lesbian, too. He said, "What John Kerry said was very kind."

"I think Dick Cheney's family situation is very public, very known to everybody," said Gephardt, D-Mo. "When you're in politics today, everything is out there. I know that. My daughter knows that. My wife knows that."

Betty Degeneres, whose daughter, the comedian Ellen Degeneres, is also a lesbian, said she was baffled that the Cheneys would be offended. "It's not an insult to be gay or lesbian," she said.

Mary Cheney and her partner were an established couple and owned a house together in Colorado when her father was picked as Bush's running mate in 2000. Mary Cheney, who had run a gay and lesbian outreach program for Coors Brewing Co., wears a gold band on her left hand.

The pair sat side by side in the vice president's box during his acceptance speech at the Republican National Convention, though neither joined the family onstage afterward, and neither was in sight for the convention finale the next night.

This wasn't the first time Mary has been thrown into the news involuntarily. At this summer's Republican convention, Illinois Republican Senate candidate Alan Keyes said that, as a lesbian, she is a "selfish hedonist."

Her sister said at the time that she wouldn't dignify the comment with a response.

"I must say I was shocked that he would play with fire in this fashion," he said. "He shouldn't have gotten personal about the answer."

Kerry's answer, Graff noted, was about whether homosexuality is a choice, not about how the Cheneys have raised their daughter.

Still, the vice president has not shied away from the topic. This summer, he spoke at some length about his daughter's sexuality and his view of gay relationships. He also publicly disagreed with Bush about the need for a constitutional amendment prohibiting same-sex marriages, saying he preferred that the states settle the issue.

"Lynne and I have a gay daughter, so it's an issue our family is very familiar with," Cheney said in Davenport, Iowa.

Cheney thanked his opponent for the "kind words he said about my family and our daughter. I appreciate that very much."

So why was Cheney's reaction so different this week?

It may be partly that Kerry is the presidential, not the vice presidential, candidate, so the stakes are higher, Graff said. And it may be how the statement was delivered.

"I think it's the warmth that was lacking," he said. "Edwards' statement was a daddy talking. I don't think I felt the same way when I heard Kerry."