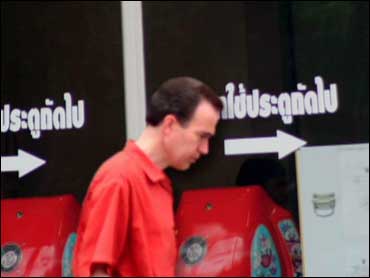 Dick Cheney said Monday the country needs George W. Bush to "clean things up in Washington" and credited the Texas governor with bringing unity to the Republican Party.

"The feel, emotion and dynamism is really something," Bush's pick for vice president said at a breakfast in a railroad museum near the Republican National Convention.

"Bush is exactly the man we need," said Cheney, a former congressman from Wyoming, White House chief of staff and defense secretary.

The scene was a bit of nostalgia for Cheney, who was surrounded by homestate supporters next to a refurbished Union Pacific Railroad car similar to one that his grandfather, a railroad cook, once lived in.

"There was nothing more romantic" when he was a boy than the idea of living on a train, said Cheney.

Cheney now serves on Union Pacific's board of directors, a post he said he'll drop because of his shift from corporate executive to vice presidential candidate, a transition that he said has been smooth.

Greeted by a cheering crowd of several hundred supporters upon his arrival at the Republican National Convention, Cheney played up his experience as both a seasoned Washington insider and corporate executive who has "been out in the real world."

He wasted no time taking on the issue of his voting record in a short speech, underscoring how GOP-friendly it was. He didn't mention his votes against a resolution to free Nelson Mandela and a ban on "cop-killer" bullets - both under attack by Democrats.

"One of the things I feel best about ... is my record voting for smaller government, lower taxes ... the policies of Ronald Reagan," said Cheney, whose wife, Lynne, and daughter, Mary, accompanied him to the rally.

Democrats are focusing on Cheney's votes against the school lunch program, Head Start and the Clean Air Act in TV ads that started airing in 17 battleground states Sunday.

"What does Cheney's record say about their plans?" the ad asks. "What are their plans for working families?"

On Sunday talk shows, Cheney said, "I might find a couple I would do differently" if he had to vote on the same issues again.

He said he would support funding for Head Start, consider a ban on cop-killer bullets and support the Equal Rights Amendment with modifications.

He defended his vote on Mandela, saying his political party was viewed as a terrorist organization that has "mellowed."

The Bush campaign issued a point-by-point rebuttal of the ad, saying Cheney did support a bill that increased funding for Head Start in 1982 and opposed other bills because he thought it was more important to deal with the government's huge budget deficit.

Former President Ford and former GOP presidential candidate Bob Dole, writing Monay in the New York Times, rejected what they said was the attempt to "demonize one of this country's most honorable public servants."

"One might logically ask of these born-again critics whether a similar standard should be applied to Vice President Al Gore, whose House voting record on abortion and gun control was virtually identical to Mr. Cheney's," they wrote.

While he spoke proudly of his 25 years as a Washington insider, Cheney attempted to distance himself from the political arena in Washington and praised states for being at the root of the nation's economic success.

"When you get out there and look back at Washington, you frequently end up scratching your head," said Cheney, who will leave his post as chief executive officer of the oil services firm Halliburton Corp.