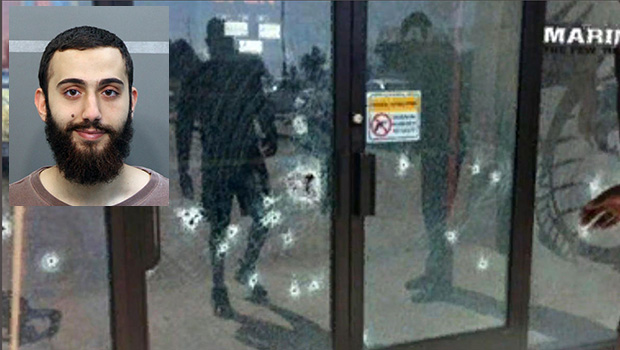 FBI investigators haven't turned up a direct link between Mohammod Youssuf Abdulazeez and ISIS or any other terrorist organization overseas, but law enforcement sources confirm that investigators have found pages of notes believed to have been written by the Chattanooga gunman responsible for the deaths of five U.S. service members last week, reports CBS News correspondent Jeff Pegues.

Law enforcement sources say Abdulazeez wrote about his drug use and how he was influenced by images of death in the Middle East. Family and friends say the 24-year-old was depressed and at times on medication.

Officials say Abdulazeez had been looking fro religious guidance recently. During an online search, Abdulazeez looked at the writings of Anwar al-Awlaki, among others. Al-Awlaki, who was killed in Yemen by a drone strike in 2011, was an American-born cleric and leading member of al Qaeda in the Arabian Peninsula. He spread his message of jihad in videos and writings. Among his followers was Army Maj. Nidal Hassan, the gunman who fatally shot 13 people at Fort Hood in 2009.

The FBI is now gathering Abdulazeez's medical records and is re-interviewing some people who knew him. Investigators are also looking at the seven months he spent in Jordan last year but so far have not turned up any evidence he met with extremists there.

The FBI is also investigating the 24-year-old shooter's medical records - family and friends say Abdulazeez was depressed and was on medication at some point.

Family members say Abdulazeez's 7-month-long trip to Jordan last year to visit family was an attempt to get him away from bad influences at home. So far, Jordanian investigators and intelligence officials have not come up with evidence Abdulazeez was in contact with radical elements there. However, officials stress that the Jordanian investigation is in its early stages. Jordanian officials are doing much of the leg work there.

The Kuwait-born man is said by family members to have been first treated by a child psychiatrist for depression when he was 12 or 13 years old.

Abdulazeez also fought drug and alcohol abuse, according to a family spokesman, who spoke Sunday on condition of anonymity to avoid unwanted publicity.

Relatives of Abdulazeez believe those personal struggles are at the heart of last week's killings at a pair of military sites in Chattanooga, the representative said.

"They do not know of anything else to explain it," said the representative, who has been involved with the family since the shootings. The claim fits a pattern of behavior by Abdulazeez that includes a drunken driving arrest earlier this year and the loss of a job over a failed drug test.

Several years ago, relatives tried to have Abdulazeez admitted to an in-patient program for drug and alcohol abuse but a health insurer refused to approve the expense, said the family representative.

"He was medicated like many children are. Through high school and college he did a better job sometimes than others staying with it," the representative said.

Abdulazeez had spent several months in Jordan last year under a mutual agreement with his parents to help him get away from drugs, alcohol and a group of friends who relatives considered a bad influence, the representative said.

While Abdulazeez sometimes expressed misgivings about U.S. policy in the Mideast, his feelings didn't seem extreme and there was no indication he was involved with terrorist groups while in Jordan, the family representative said.

The representative said Abdulazeez had owned guns for years, going back to when he was a child shooting at squirrels and targets, and called himself an "Arab redneck" or "Muslim redneck."

A year after graduating from college with an engineering degree, Abdulazeez lost a job at a nuclear power plant in Ohio in May 2013 because of what a federal official described as a failed drug test.

Recently, Abdulazeez had begun working the night shift at a manufacturing plant and was taking medication to help with problems sleeping in the daytime, the representative said, and he also had a prescription for muscle relaxants because of a back problem.

It's unknown what substances were in the man's system at the time of the killings, but toxicology tests should provide an answer.

After returning from his time overseas, Abdulazeez was arrested on a charge of driving under the influence April 20. A police report said he told a Chattanooga officer he also was with friends who had been smoking marijuana. The report said Abdulazeez, who had white powder on his nose when he was stopped, told the officer he also had sniffed powdered caffeine.

The arrest was "important" because Abdulazeez was deeply embarrassed and seemed to sink further into depression following the episode, the representative said. Some close relatives learned of the charge only days before the shooting.

Bassam Issa, president of the Islamic Society of Greater Chattanooga, said he knew nothing of Abdulazeez's problems, despite knowing his father well through the mosque. Drinking alcohol and using drugs is strictly forbidden in the Islamic faith.

"In our culture, if a son or daughter is having those sorts of problems, they keep it a secret because of the shame," Issa said. "As a parent, you always want to be able to say your child is making you proud, not that they are struggling."

A former college professor who saw Abdulazeez at their mosque six days before the killings said the young man didn't seem different after returning from Jordan last year or during their final encounter.

"I just saw the same friendly guy as before," said Abdul Ofoli, who teaches electrical engineering at the University of Tennessee at Chattanooga, where Abdulazeez graduated in 2012.