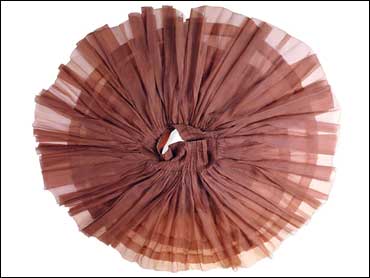 It helped make Marilyn Monroe a legend, drove Austin Powers wild and what would Scarlett O'Hara have been without a flowing silhouette?

The skirt: a garment so distinctly feminine that in the 1800s, the word itself was slang for woman, CBS Sunday Morning contributor Serena Altschul notes.

"A skirt has been a crucial part of women's dress for centuries," says Valerie Steel.

Steel is the director of the museum at the Fashion Institute of Technology in New York.

"Like a high-heeled shoe, there's a lot of eroticism packed into a skirt," Steel says.

A lot of history, too. The skirt is the second-oldest garment known to mankind. Only loin cloths predate it. And mankind is the right word to use because skirts haven't always been just for women.

"Men and women both wore skirts in ancient times. Once you had the initial idea of weaving a rectangle and tying it around yourself, you had basically the skirt. And if you look at say ancient, Egyptian paintings, you see men and women both wearing what's in effect a skirt," Steel explains.

Today, a skirt's design is all about personal style. But not long ago, long was the only way to go.

For hundreds of years, a long skirt was the very definition of luxury, mainly because fabric was so expensive.

"Women wore long skirts for centuries, mostly as a matter of modesty and prestige," Steel says.

Another sign of status and beauty: the narrowness of a woman's waist --so important that women would try to accentuate their waistlines by expanding the girth of their hips with hoops and petticoats, perhaps even a padded derriere.

You can still see this style from the 18th and 19th centuries in today's wedding gowns, as Steel explains, "because that's a very romantic moment. And a lot of people associate that with an old-fashioned style of dress."

But away from the altar, things have changed.

Like the stock market, hemlines have been rising and falling since the 1920s. Though don't put too much stock in that.

"We should probably disprove one myth: which is that shorter hemlines have to do with a good economy. And longer hemlines mean an economic recession. It's not true," Steel says.

Long or short, if you're looking to make a splash you might want to give the Prada collection a whirl.

"It's always an artistic element which has inspired Muccia (Prada) and inspired her to give more than just a simple skirt," says Vogue's editor-at-large Andre Leon.

At Prada's flagship store in New York, more than 100 of the design house's most whimsical, stunning, and more often than not, completely unaffordable skirts can be seen in a display of Prada's best designs of the past 30 years.

"It can take on the elements of a baroque painting or a minimalist painting or a wonderful scene out of nature and that's what makes great design," Leon adds.

But you may just want to window shop. Prada's most expensive skirts could set you back tens of thousands of dollars.

Pointing out one particularly pricey outfit, Leon defends it saying, "it is a $30,000 crocodile mini skirt. And why not? Why not? I mean, why not?"

From the essential, to the absurdly impractical, skirts have been a mainstay of women's wear since there was women's wear and it's safe to guess you ain't seen nothin' yet.