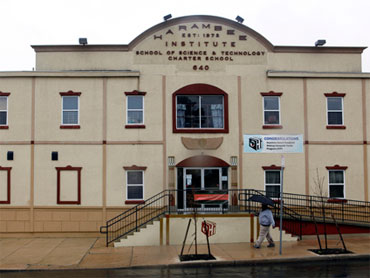 Who knew a school cafeteria could be so much fun?

A space where hundreds of Philadelphia charter school students have been eating their lunches during mundane weekdays has been doubling in its off-hours as nightclub, offering dancing and drinking despite an expired liquor license.

City and school officials are not happy about the arrangement between Club Damani and the Harambee Institute of Science and Technology Charter School, which serves about 450 children in kindergarten through eighth grade.

Superintendent Arlene Ackerman said in a letter to Harambee on Monday that "a school and a nightclub cannot coexist in the same space and (the arrangement) must cease immediately," according to a school district statement.

As a charter school, Harambee receives about $3.5 million annually in public funds but operates independently of the district. Officials at Harambee, which is on spring break this week, could not be reached for comment Tuesday.

Liquor licenses can be denied to establishments within 300 feet of a school. In this case, the school moved into a building that already was licensed, state Liquor Control Board spokeswoman Francesca Chapman said Tuesday.

Harambee's facility in West Philadelphia was once an Italian-American social club that had held a liquor license since 1936, Chapman said. The club transferred the license to the school-affiliated Harambee Institute in 2002, but Chapman said it expired in 2008.

The city's Department of Licenses & Inspections cited the club in February for lacking three necessary business permits, said Maura Kennedy, a spokeswoman for the mayor's office. The club has until April 10 to comply or it will be shut down, she said.