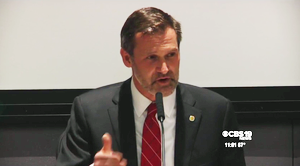 CHARLOTTESVILLE, Va. -- A Virginia mayor has become the target of hate-filled, anti-Semitic messages from anonymous Twitter trolls after condemning a weekend protest over the planned removal of a Confederate monument.

Many public figures are advised to ignore the trolls. But Charlottesville Mayor Mike Signer is hitting back.

"Whew! Lot of trolls out tonight. Must be doing something right," Signer tweeted Sunday.

Online trolls seek to provoke angry responses, pulling people into unwinnable and ill-advised flame wars. Signer, however, has shown a sense of humor: When an anonymous tweeter called him a "disgrace," he wrote: "You seem nice. What's your real name?"

He responded to another Twitter user who called him a Bolshevik "on the side of evil" by tweeting: "Apparently this troll doesn't know about our unemployment rate (2.9%-lowest in Va.) and AAA-bond rating. Oh well!"

And when still another troll called him a "slimy spineless white coward," Signer wrote: "Another profile in courage here-anonymous trolls lecturing elected officials about cowardice. Yawn."

The Democratic mayor said in an interview Monday that he doesn't intend to make a habit out of responding to online trolls. But after white nationalists showed up burning torches in his city, he wants to show that neither he nor his community will be silenced.

"It's always a difficult balancing act for public officials about how much oxygen to give the alt-right, which depends on publicity to survive," Signer said, referring to the fringe movement that blends racism, white nationalism, anti-Semitism and anti-immigrant ideas.

"While I am very troubled, angry, and extremely dissapointed, I'm encouraged by what I saw not on Saturday but on Sunday," Charlottesville Vice Mayor Wes Bellamy told CBS affiliate WCAV-TV . "These folks who came here this weekend, most of whom are outsiders, they do not want to engage in debate. They don't believe much in democracy. They're instead interested in intimidation and theatrics, which is something we are seeing in the Trump era."

Among those at the protest over the Gen. Robert E. Lee statue Saturday was Richard Spencer, who popularized the term "alt-right" and is is a leading figure in a fringe movement that has been described as a mix of racism, white nationalism and populism. After President Donald Trump's election, Spencer hosted a conference in Washington where he shouted "Hail Trump, hail our people, hail victory!" and the audience responded with Nazi salutes.

Spencer scoffed at Signer's suggestion that the torches, a mainstay of Ku Klux Klan rallies decades ago, were brought to instill fear. Spencer said there's "something magical about fire at night."

The torch-carrying crowd also included Nathan Damigo, who leads a white nationalist group and can be seen in a video that went viral last month punching a woman at a rally in Berkeley, California.

Signer said he's received hundreds of negative tweets, including dozens attacking him for his Jewish faith. He reported one to Twitter that said his "days are numbered" but said he hasn't received any other explicit threats.

And the supportive emails and social media messages he's received from across the country have far outweighed the negative, he said.

Hundreds of people gathered in the park with candles Sunday to speak out against the previous night's rally. Police said three people were arrested after scuffles broke out.

The Charlottesville City Council voted earlier this year to remove the Lee statue from the park, but a judge has agreed to a temporary injunction that blocks the city from doing so for six months.

Signer voted against the statue's removal, saying among other things that he worries "about the impulse to remove, delete, and expunge that which offends us." Signer instead supported a plan to add a new memorial to civil rights victories.

The debate about Confederate symbols has swept through cities across the South since the 2015 massacre of nine black parishioners at a South Carolina church by an avowed white supremacist.

Last week, workers in New Orleans removed a statue of Confederate President Jefferson Davis, the second of four monuments to Confederate era figures the city has voted to remove. The first to go was a granite obelisk honoring whites who battled a biracial Reconstruction government installed in New Orleans after the Civil War.