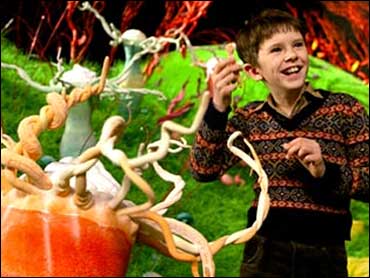 "Charlie and the Chocolate Factory" and "Wedding Crashers" held off a rush of new releases to retain the top two spots at the weekend box office.

But after two straight weekends of rising revenue, Hollywood slid back into the slump that has lingered most of the year. The top 12 movies took in $128.9 million, down 7 percent from the same weekend in 2004.

"The business was there. It just got spread pretty thin among a lot of movies," said Bruce Snyder, head of distribution for 20th Century Fox, whose films include "Fantastic Four."

"Charlie and the Chocolate Factory," starring Johnny Depp as candyman Willy Wonka, remained the top movie with $28.3 million, bringing its 10-day total to $114.1 million, according to studio estimates Sunday.

Michael Bay's cloning thriller "The Island" and the remake of the baseball comedy "The Bad News Bears" both debuted weakly.

"The Island," starring Ewan McGregor and Scarlett Johansson as clones on the run from a facility that has raised them as spare body parts, took in $12.1 million to finish at No. 4. It came in just behind "Fantastic Four," which grossed $12.3 million to lift its 17-day haul to $122.6 million.

"I don't know. Clearly, it's a disappointing opening," said Jim Tharp, DreamWorks' head of distribution. "We can only hope the film finds its audience in the next few weeks."

The acclaimed independent film "Hustle & Flow," starring Terrence Howard as a pimp trying to become a rap singer, debuted at No. 7 with $8.1 million. That was a solid opening compared to "The Island" and "Bad News Bears," which played in more than 3,000 theaters, three times as many as "Hustle & Flow."

The Antarctic documentary "March of the Penguins" expanded to 695 theaters, up from 132 the previous weekend, and cracked the top 10 with $4.3 million.

With an $8.8 million weekend, Steven Spielberg and Tom Cruise's "War of the Worlds" climbed to $208.3 million, second-best for the year after "Star Wars: Episode III — Revenge of the Sith," which has hit $376 million.