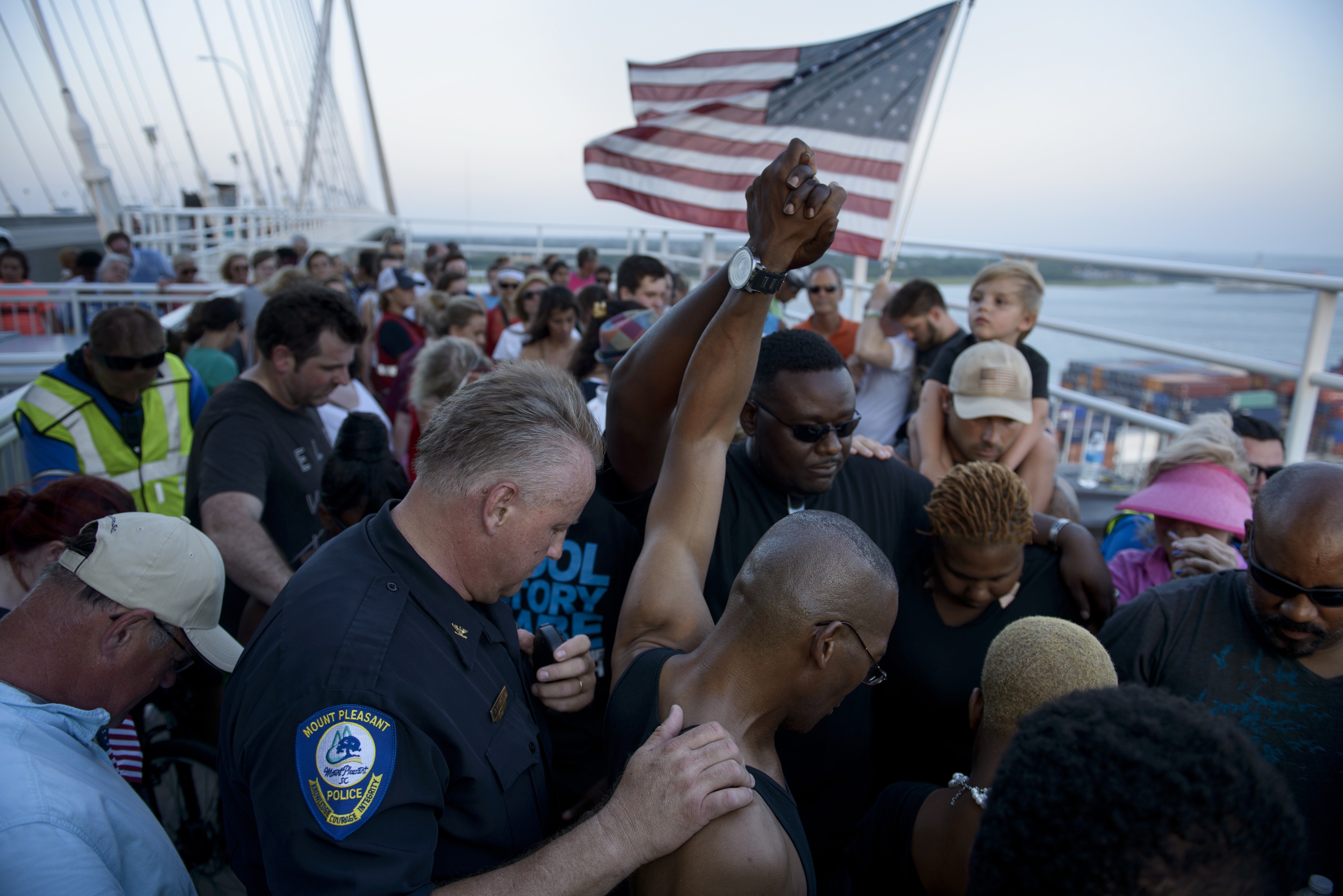 CHARLESTON, South Carolina -- A week of funerals lie ahead for victims of the Charleston church massacre that killed nine people, re-opened old racial wounds and evoked memories of past episodes of violence against black churches.

Bells tolled across the city Sunday as thousands linked up on a towering bridge and a historic sanctuary reopened in displays of unity. Residents repeated messages of solidarity, love and even defiance of evil at the remembrances, hopeful their expressions would drown out the hate embodied in the slayings at Emanuel African Methodist Episcopal Church.

Authorities say a white gunman was welcomed into a bible study last week at the historic black church before making racist remarks and shooting nine people to death.

One of the victims was 26-year-old Tywanza Sanders. Family friend and local attorney Andy Savage has heard Felicia Sanders, Tywanza's mother who survived the attack by pretending to be dead, describe the moment the gunman started firing:

"He stood up and, as she reports, he said 'I have to do this.' And there was gunfire - the pastor [the Rev. Clementa Pinckney] being the first one injured. Her son Ty, who had been injured and said 'Mom, I think I've been shot in the head,' said to him, 'Why are you doing this? You don't have to do this.' ... And that's when the racist remarks regarding black America were made," Savage told CBS News correspondent Jeff Pegues.

"Because the doors of Mother Emanuel are open on this Sunday, it sends a message to every demon in hell and on earth," said the Rev. Norvel Goff, who led the first Sunday service since the killings at the church known as "Mother Emanuel" because it is one of the oldest black congregations in the South.

During the service, many stood - some holding small children - to shout their praises or raise their hands toward the church's vaulted ceiling. For added security, police officers stood watch over worshippers.

Later Sunday, thousands of people gathered on either side of the city's iconic Arthur Ravenel Jr. Bridge and marched across in a showing of solidarity and healing. Underneath the more than 2-mile span with towering cable supports, dozens of boats gathered and blew their air horns in support, while cars honked as they passed on the bridge.

According to CBS affiliate WCSC, the event's Facebook page called the unity chain "an opportunity for all of us to make a statement to our country and our world."

The bridge is named after a former state lawmaker and vocal supporter of the Confederate flag which represented the pro-slavery South during the American Civil War.

On Monday, South Carolina Gov. Nikki Haley said the Confederate flag should be removed from the grounds of the state capitol, reversing her position on the divisive symbol amid growing calls for it to be removed.

The slayings have renewed calls for the flag to be removed from the South Carolina Statehouse grounds, in part because photographs of suspect Dylann Roof in a purported manifesto showed him holding Confederate flags.

A law enforcement official told CBS News that authorities have gone through a computer used by Roof and have not seen any links to anyone else involved in the shootings at this point. Police and FBI are talking to friends and associates of Roof's and seeking to identify others to interview.

"The switch that flipped was the death of my friend Sen. [Clementa] Pinckney... I've been in the House five years. I should have filed that bill five years ago. But the time is now, I can't let my friend the senator's death go without fundamental change in South Carolina," Brannon said.

Less than 2 miles from Emanuel, someone vandalized a Confederate monument, spray-painting "Black Lives Matter" on the statue. City workers used a tarp to cover up the graffiti, police said.

Photos on local news websites from before the tarp was put up showed the graffiti in bright red paint, along with the message "This is the problem. # RACIST."