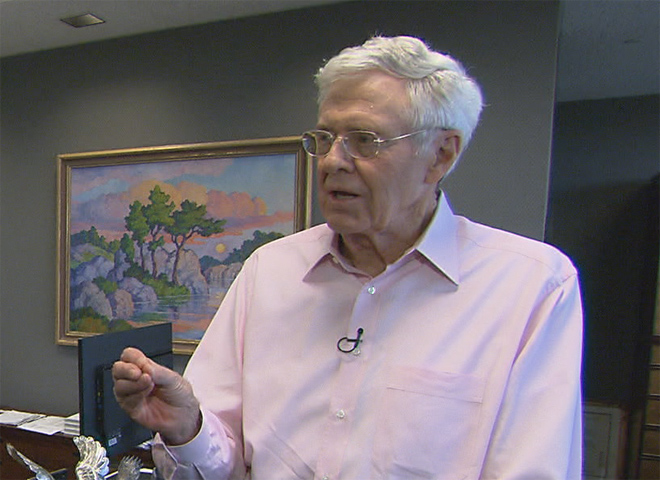 Charles Koch is a billionaire many times over -- and a much-discussed figure in the world of business and political funding. This morning he's making a rare television appearance answering questions from our Anthony Mason:

When Charles Koch took over the family business nearly half a century ago, he had a vision for the oil company his father founded: "I worked out, okay, how much can we grow over a period of time? And projected that out through my life. And two years ago, we were 70 times that amount."

Koch industries, headquartered in a sprawling glass-and-granite campus in Wichita, is now the second-largest private company in the country. With more than 100,000 employees worldwide, the conglomerate refines up to 600,000 barrels of oil a day and produces everything from Stainmaster carpets to electronic components for smartphones.

Charles and his brother, David, own 84 percent of Koch Industries. Forbes estimates their net worth at nearly $43 billion each.

But the sixth-wealthiest man in the country still gets his lunch every day at the company cafeteria, although it's a bit more challenging after recent foot surgery. The 79-year-old CEO is at his desk each morning at 7:15 a.m., under the watchful eye of the family patriarch: "That's my Dad," Charles said.

Fred Koch made his first fortune building refineries for Stalin's Soviet Union, and became a fervent anti-Communist. In his office, Charles keeps a framed letter Fred wrote to his first two sons, when he took out an insurance policy for them: "'If you choose to let this money destroy your initiative and independence, then it will be a curse to you and my action in giving it to you will have been a mistake.' So that's the way he was."

Koch also inherited his father's distrust of big government, and he's used his fortune to bankroll a network of conservative groups that helped give birth to the Tea Party movement. That's made this billionaire and his brother among the most vilified men in American politics.

Koch has become a codeword for corporate villainy among Democrats, like Senator Harry Reid:

"The Koch Brothers and other money interests are influencing the political process for their own benefit. They are trying to buy America, and it's time that the American people spoke out against this terrible dishonesty of these two brothers who are about as un-American as anyone that I can imagine,"

According to the Campaign Media Analysis Group, some 53,000 attack ads mentioned the Koch Brothers in the last election cycle.

"Like Harry Truman said, if you can't stand the heat, don't go in the kitchen," said Koch.

"But it's got to be unnerving on some level?"

"I knew I'd get heat. But I didn't know it'd be this vicious and this dishonest."

But Koch is now trying to give the family name an image makeover. The company has launched a national ad campaign: "We Are Koch."

And in a new book, "Good Profit," Koch lays out the market-based management philosophy that drove his company's phenomenal success, and writes about the values that drive him -- personally and politically.

One of four Koch brothers, Charles went to MIT, like his father, but not before bouncing around eight different schools.

Mason asked, "What would you say the source of your rebelliousness was?"

"I'm kind of a contrarian, as you probably know from all the different things I do. I do things differently than other people -- 'What are you doing that for? You're just creating trouble for yourself!'"

"Why are you the one brother still in Wichita?" Mason asked.

"Because my father said, 'Either come back to run the company or I'm gonna sell it,'" said Charles. "And none of the others wanted to come back."

"But that's not the whole reason," Liz continued. "He could have moved many times. [He] could have moved Koch Industries anywhere in the world you wanted to. But this is a great place for raising children and running a business with values."

It was while he and Liz were building their house here in 1973 that Koch confronted his first major crisis as CEO: the Arab oil embargo. "I thought we might go broke, bankrupt" he said.

The scariest time, said Koch, was when there was a takeover attempt -- "by stockholders, or some of my family -- that was pretty scary -- and all the lawsuits that followed it. That was pretty depressing."

In the early 1980s the Koch family broke into open civil war, when Bill and Fred Jr. challenged their brothers for control of Koch Industries. The battle would drag on for nearly two decades.

And while Charles and David prevailed, Charles says the settlement prevents him from talking about it.

To spread his free-market philosophies, in the '70s Koch co-founded the libertarian think tank, the Cato Institute, to advocate for a radically smaller government with reduced regulation and no subsidies.

But during the administration of President George W. Bush the Kochs decided to get more active.

"He's a fine person," said Koch. "I'm sure he meant well. Then he grew government more than just about any president before him, and he got us into counter-productive wars. So that's when I decided we needed to get into politics."

The Koch Brothers have helped fund a complex network of political action committees and advocacy groups, many of them tax exempt, so donors don't have to be disclosed. The network, which now rivals the Republican National Committee in its financial clout, will spend $300 million in this next election year.

Mason asked, "Do you think it's good for the political system that so much what's called 'dark money' is flowing into the process now?"

"First of all, what I give isn't dark," said Koch. "What I give politically, that's all reported. It's either to PACs or to candidates. And what I give to my foundations is all public information. But a lot of our donors don't want to take the kind of abuse that I do. They don't want these attacks. They don't want the death threats. So they aren't going to participate if they have to have their names associated with it."

"But do you think it's healthy for the system that so much money is coming out of a relatively small group of people?"

"Listen, if I didn't think it was healthy or fair, I wouldn't do it. Because what we're after, is to fight against special interests."

"Some people would look at you and say you're a special interest."

"Yeah, but my interest is, just as it's been in business, is what will help people improve their lives, and to get rid of these special interests. That's the whole thing that drives me."

"There are people out there who think what you're trying to do is essentially buy power."

"But what I want is a system where there isn't as much centralized power, where it's dispersed to the people. And everything I advocate points in that direction."

Koch-backed groups were among the early donors to the Tea Party movement.

"What do you think of the Tea Party?" Mason asked.

"Well, I think there are some good things and bad things," Koch replied. "To the extent the Tea Party is working to keep us from having a financial disaster, then they're great. If they're doing other things that are limiting people's choice and opportunity, then they're not."

"A lot of the groups that you've supported have essentially provided financial fertilizer for the Tea Party. Would you agree with that?"

"Yes, yes. But listen, if we had to agree with everything a group or a person stood for, we would never do anything."

Some of the Kochs' causes might surprise you. Koch industries donated $25 million to the United Negro College Fund. The Kochs have now joined the White House in calling for criminal justice reform, to reduce prison sentences for non-violent offenders.

"Did you ever think you'd be working with the Obama administration on anything?"

"I feel the way Frederick Douglass did; he said, 'I'll work with anybody to do good, and no one to do harm.'"

"Well, I don't like to put it that way. I would say, yeah, less unproductive."

Five Republican candidates -- Jeb Bush, Marco Rubio, Ted Cruz, Carly Fiorina and Scott Walker (who's since dropped out) -- were invited to the Koch Brothers' most recent donor meeting in August. One who was not on the guest list tweeted:

Mason asked, "Are you intending to support a candidate for President?"

"If Donald Trump got the nomination, would you support him?"

"I made a vow: I'm not going to talk about individuals," Koch said. "David said he liked [Scott] Walker, so now all the press is, 'Well, we put all this money behind Walker, and he had to drop out.' We didn't put a penny [on him]. David said he liked him."

"Were you surprised Walker's candidacy didn't resonate in any way?"

"Well, I thought it would resonate better. But he wasn't a very good campaigner, so you may agree with us on a number of issues. But if you're presenting them in a way that doesn't resonate, that doesn't do any good. So we can't support you. We're not interested in attacking windmills."

But Charles Koch is not about to abandon the fight. Behind that genial Midwestern manner is a billionaire who sticks to his guns, and who has effectively made himself a target.

"Yeah, I get a lot of death threats. I'm now on al Qaeda's hit list, too. So that's really getting in the big time! Gets pretty scary."

"That hasn't stopped you?"

"No. I decided long ago, I'd rather die for something than live for nothing."