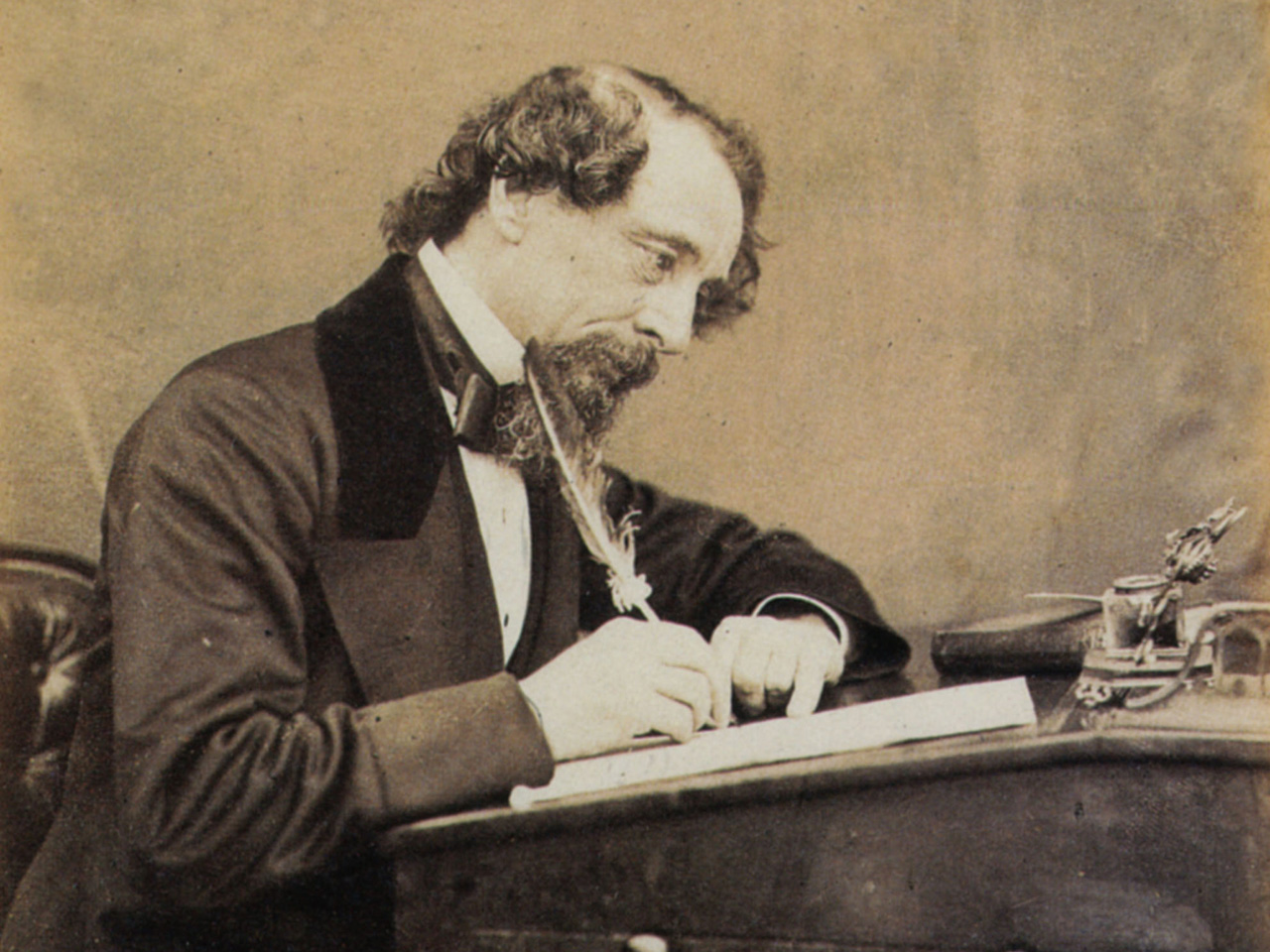 (CBS News)   'Tis the season for tales of Christmas, including the one by an author whose astounding productivity even now has people asking "what the dickens?" His own life's tale is about to be told on the movie screen.  Here's Anthony Mason:

"A Christmas Carol" may be the most famous story by one of the world's most famous authors.

Charles Dickens' tale of the miserly Ebenezer Scrooge and his confrontation with the Ghosts of Christmas Past, Present & Future has been dramatized again and again for more than a century and a half, even by the Muppets.

"It's not too much to say that Dickens had a great hand in inventing Christmas as we know it," said Liz Denlinger, a curator of rare books at the New York Public Library. "'A Christmas Carol' was iconic as soon as it was published."

The library holds an extensive collection of works and letters by Dickens, including his personal copy of "A Christmas Carol," signed Charles Dickens at Plymouth, Tuesday Seventh January 1862.

Charles Dickens was a rock star of Victorian culture. Queen Victoria was a fan.

And he toured like a rock star, giving dramatic readings of his stories. The library also has Dickens' personal copy of his touring schedule, including his first, an exhausting trek in the Autumn of 1858 -- 129 appearances in 49 towns, all over England, Ireland, back to England, and up into Scotland.

The bottom of the list reads, "The end. Thank God."

The actor Ralph Fiennes plays Dickens in the new film he directed, "The Invisible Woman."

He told Mason that when he first started looking into Dickens, the first thing he saw was "his ferocious energy. A man who can't stop working."

"What do you think accounted for his drive?" Mason asked.

"The lynchpin for his drive, I think, was his sense of having been almost unjustly served as a child," Fiennes replied.

When Dickens was 12, his father was sent to debtor's prison. Young Charles was forced to leave school and work in a factory making boot polish.

"His sense of social justice is very acute," said Fiennes. "His sense of institutes that are corrupt and dead and deadening. He really goes for the jugular on people he thinks are exploiting other people."

By 1857, after publishing a dozen novels -- including "The Adventures of Oliver Twist" and "Little Dorrit" -- the author was a household name.

"He's 45, he's at the height of his career, he's a hugely famous figure in the English-speaking world," said Fiennes.

Then Ellen Ternan entered his life. "He meets this young girl and boom, he goes for her," said Fiennes.

Nelly Ternan, "The Invisible Woman" of the film's title, was only 18. But Dickens would turn his life upside-down for her, leaving his wife, Catherine, with whom he'd had 10 children.

To protect his reputation, Dickens denied the affair.

"The kind of overall perception gets lopsided 'cause we're all going, 'Oh, I don't like the way he treated his wife.' Okay, fine. But then he wrote 'Bleak House,' 'David Copperfield,' 'Our Mutual Friend,' 'Tale of Two Cities,' 'Nicholas Nickleby' -- all these things, this amazing stuff. Anyone who engages a Dickens novel, it never leaves you."

Of the author, Fiennes said, "I kind of feel he is totally human."

As Dickens' affair deepened, he wrote what he considered his best novel, "Great Expectations." At the New York Public Library, Liz Denlinger showed Mason the checks he received as payment: The sum of 3,250 pounds.

"It absolutely is," said Denzinger. "You could multiply that by at least 100, I'd say, for an equivalent now."

Fiennes said he believes "Great Expectations" came out of Dickens' anguish and turmoil, "trying to figure out his life with Nelly or not."

Dickens, it's believed, continued his relationship with Nelly Ternan until his death in 1870 at age 58.

Mason asked Fiennes, "Did you like Dickens when you were done?"

"I like Dickens, yeah, I do," replied Fiennes. "I think Dickens is like a hungry child determined to entertain you. And a scarily perceptive child who's going, 'There's this and there's this and there's this,' and the furious imagination that just can't stop. And where that comes from is just one of those mysteries. You don't know quite where, it just happens to come from a man called Charles Dickens."