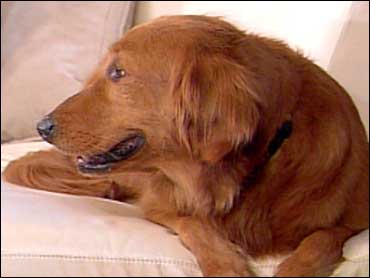 Anyone who's a regular viewer of The Early Show knows who Chance is. He is not just Dave Price's dog, he is the weatherman's best buddy.

How Chance came into Price's life is a remarkable story, one that illustrates the great work being done by the folks at the ASPCA.

These days, Chance has it made. His food is literally gourmet. "Would you like to try some of Bobby's fish?" Price asks his pal, referring to a dish created by Early Show resident chef Bobby Flay.

With such a devoted owner, Chance lives like a king. And since he accompanies Price on many of his stories, the dog has become a bit of a celebrity. But life hasn't always been so good.

Chance used to live surrounded by junked cars and debris, without food, without water and without love. And if it weren't for the people of the ASPCA who rescued him, we might have not have such a happy story to tell today.

Ann Marie Lucas, a special investigator with the organization, explains, "Basically what we do is investigate cases of animal cruelty throughout New York City."

Lucas loves animals, which makes her job difficult. She says, "I want to cry every day at what I see. It's heart wrenching to get into a situation and see an animal suffering."

Two years ago, Lucas and her partner investigated a complaint that a number of dogs at junkyard in the Bronx were being starved.

She says, "They were emaciated; they were covered with ticks; there was no visible food and water. No owner to be found anywhere. And we realized that these dogs were in bad shape."

One of those dogs was Chance.

Lucas says, "We were trying to get the fence up so that we could get the dogs out from underneath and Chance was right in there with his shoulders trying to get himself out.

"I never get used to seeing animals suffering. I'm always outraged. It always becomes desperate to get them out of that situation," she adds.

Once rescued, the three dogs were rushed to the ASPCA's veterinary hospital.

Lucas notes, "The dogs were all covered in ticks. That always requires immediate removal of the ticks, so they don't become anemic, and they don't have further problems."

But saving animals is only part of the job. They still wanted to arrest the person responsible.

Lucas recalls, "It was sort of dramatic. We sort of did an undercover operation and went in plain clothes. So we actually were able to locate him and we grabbed him while he was walking down the street."

The man was placed under arrest for cruelty to animals, and according to Lucas he faces up to a year in jail and a possible $1,000 fine.

For Lucas it was sweet justice.

She says, "I think I run the whole emotional gamut. I'm upset, I'm frustrated, I'm angry. And then, I'm relieved when I'm able to rescue the animal and actually bring someone to justice for doing what they did to an animal."

The happy ending to this story is that all three dogs were eventually adopted, one of them by a weatherman who feel in love at first sight.

The Early Show thanks Animal Planet for giving permission to use the footage of Chance's rescue, and Price, in particular, is grateful to the ASPCA for saving his buddy.