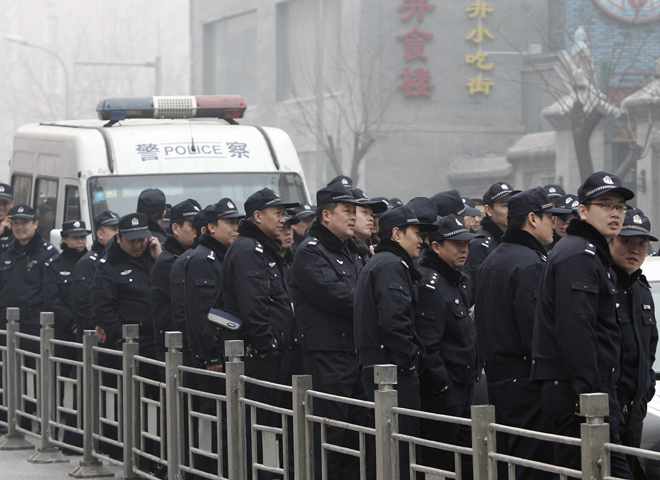 There's a revolution quietly struggling to find roots in China, and a legion of foreign journalists quietly struggling to tell the rest of the world about it. Covering public discontent on the Chinese mainland -- just like covering any other story which could possibly be construed in a negative light by the ruling Communist Party -- is difficult, at best.

Chinese police explicitly warned foreign media not to show up at spots anonymously designated for weekly protests, threatening to take away their work permits and dole out other, unspecified punishments if they ignored the order.

But CBS News, like many other Western news outlets, has tried to bring the news from China to our audience at home.

In a special report for CBSNews.com, correspondent Celia Hatton details the daily challenges of reporting news from a country where the flow of information is still far from free:

In spite of the Chinese authorities' vigorous attempts to silence the voices of dissent, small gatherings of protesters have been seen in recent weeks -- and broken up almost as soon as they began.

In an analysis last week, Hatton tried to explain some of the cultural and political differences between China and countries like Egypt and Tunisia, where governments have literally been toppled by rapidly snowballing public outcry.

China's leaders often point to "meddling" from countries like the United States as the underlying cause of anti-government sentiment, a tactic which works better, perhaps, in China than it does when used by Col. Muammar Qaddafi in Libya.

The Chinese are a fiercely proud people, and much of the public genuinely resents any suggestion that they need to be told how to, or helped to, change their way of life or political system. The government fuels that sentiment at any given opportunity, such as the one which arose when U.S. Ambassador Jon Huntsman recently showed up at one of the small street protests of the so-called Jasmine Revolution.

China's leaders are currently putting the final touches on their next five-year plan for the nation's booming economy at the annual National People's Congress in Beijing. The trajectory of China's economy in the coming years will play a direct role in shaping that of the wider world, and certainly in driving America's rebound from the recession. (Here's a good outline of the main themes from this year's NPC from a Financial Times contributor.)

But the economic news has been overshadowed by China's increasingly heavy hand in dealing with its own internal critics, and the foreign media.

While the Communist Party has been absolutely unwilling to embrace Western democratic principles like a free press and freedom of expression, the same does not hold true for the principles of capitalism, at least not in practice.

Some of Hatton's recent reports from Beijing show, quite clearly, how American culture is creeping -- if not rushing -- into China:

The big question is how the ruling party will manage to keep its firm hold on information, to maintain the status quo, as Western culture, in the form of Barbie, fried chicken, Facebook and all other tangible manifestations of American society creep into every aspect of Chinese life.

CBS News will be there to watch the changes take place, and Hatton and her crew will keep bringing inside knowledge and exclusive reporting from across the vast nation to readers of the World Watch blog as China's future unfolds. Stay tuned.