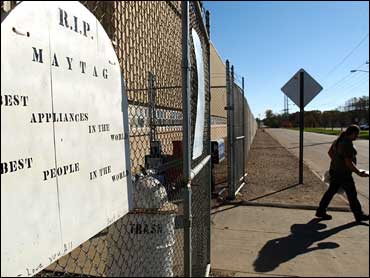 The last washers and dryers rolled off Maytag assembly lines here Thursday and the 550 workers who built them left the 2 million-square-foot factory for the last time, ending a century of appliance manufacturing in Newton under the iconic brand name.

For many workers, it was a sad parting with a company that has provided for their families over generations. Worries had mounted since May 10, 2006, the day officials at Whirlpool Corp., which bought Maytag last year, unveiled plans to close the Maytag corporate headquarters and the local factory that made washers and dryers, leaving about 1,800 local workers to find other jobs.

Maytag's last shift ended with worker hugging and the carrying out personal possessions, everything from Maytag signs to work boots, reports CBS affiliate KCCI-TV in Des Moines. Some workers left their boots hanging on the fence at the plant, a sign they wouldn't need them tomorrow.

"I know the one thing I won't miss is hearing my alarm clock going off at 4:30 a.m. I do have a lot of fond memories. I have a lot of people here that I consider to be my friends. And that's the part that I'm going to miss the most about it," Chris Doran said.

"As far as me, I'm mad. … Whirlpool is about the lowest company there is on the face of the earth. And that's about the size of it," said Dan Ingle.

Mark Wickliff, 49, carried a sign that read "Maytag, the dependability people," among other personal belongings. He said he'll return for a few more weeks to help ship out some equipment and close the plant down.

His family includes four generations of Maytag workers. After 26½ years, he falls short of the 30 needed to retire with full benefits.

"It's just close enough to look for another job," he said.

Tootie Samson, 47, of Baxter has been preparing herself for the end.

A Maytag worker for six years, she was laid off in 2003 when the company was struggling to compete and was cutting costs and jobs.

Last year she was called back again by Whirlpool to help keep production on track until the final shutdown this week. During the three-year layoff she earned a two-year degree in interior design and fashion. She, her husband, a truck driver for a construction company, and daughter learned to live leaner.

She's glad to be working when the final shutdown occurs, she said.

"When somebody dies and you don't see the body. How do you know they're gone? Not being in there when they close the doors, you don't have closure that you get this way," she said.

"It's definitely a death of sorts. A death to a lot of people's lifestyle ... How can the people that allowed this to happen live with themselves?" she said.

Many workers remaining have never worked anywhere else and a large number of them have just a high school education. Finding a job that pays $30,000 to $40,000 with good benefits will be tough.

Company officials said about 100 workers will stay in the factory for a little while longer to oversee the shutdown.

A block from the town square, the former Maytag headquarters has 55 people left out of the 900 that once ran the nation's third largest appliance manufacturer. Those who remain are responsible for the closure, a job expected to end in December.

The closing is part of a larger plan to consolidate Maytag's headquarters with Whirlpool's in Benton Harbor, Mich., and shutter plants in Iowa, Illinois and Arkansas. It calls for cutting 4,500 jobs and chopping about $400 million in operating costs.

The machines once made by Maytag will be redesigned to fit on a Whirlpool chassis and built by workers in nonunion factories in Clyde and Marion, Ohio, where they earn significantly less than the union represented workers in Newton.

A mile north of the former Maytag headquarters is Newton Union Cemetery. There, in a family mausoleum, lies founder Fred Maytag.

The washing machines will no longer be made here, but the Maytag legacy remains deeply rooted in Newton.

Near the employee entrance a plaque in the shape of a cemetery headstone hangs on the fence that says "R.I.P." A handwritten message is scrawled on the bottom: "I love you all."